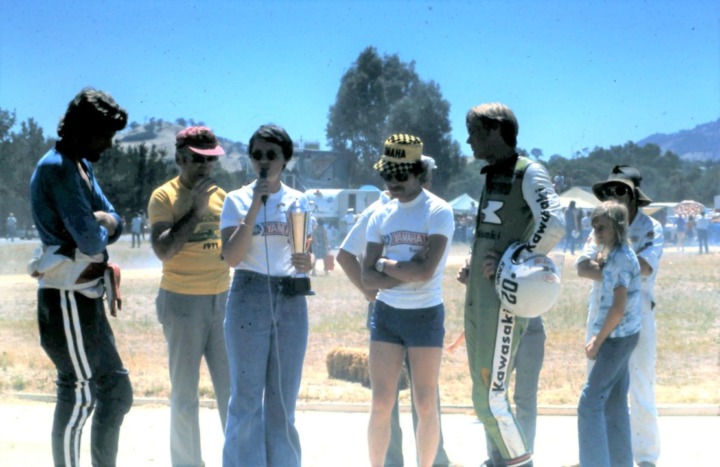 It’s funny how significant a photo can be when you have seen it dozens of times and not realised it. Here’s a shot of mine from the 1978 King of the Weir meeting at Hume Weir. Most people will remember the meeting for the stunning victory that Bob Rosenthal scored in the streaming rain on the Milledge Yamaha TZ750. On a set of borrowed rain tyres that were already several years old, Bob smashed a quality field, riding a bike that was totally unsuited to the weather, the track and the conditions.

But this is NOT a picture of the presentation ceremony from that race regardless of the fact that both Bob and Gregg Hansford are in the photo. Those of you who were there will know why this could not be so. You will also know that I don’t have photos of the Sunday presentation since my camera gear was safely tucked away to avoid the rain.

The January Long Weekend was a weird one for many reasons. As I have documented the weekend elsewhere in this blog I am not going to do so again, but Hume Weir turned on a weekend that was typical of that little country venue.

On Saturday it was punishingly hot, conditions that were quite common in the floor of the quarry from which the circuit was carved. On Sunday it was flogging down rain and the conditions were as miserable as you could imagine. A huge storm had blown through the area on the Saturday night, laying waste to the tents and caravans in the holiday park at the end of the road and tearing down tents in the pit area as well.

So this photo can plainly NOT be from after the epic Sunday race when Bob blitzed them all in the rain. And, judging by the summer dress, the day was clearly hot so, what is the story?

The photo is, in fact, from the Saturday afternoon and was taken at the conclusion of the feature event on the day, the Ross Barelli Trophy race. Ross was a talented road racer from Victoria who had perished in an accident at Bathurst in 1976. Coming down Conrod Straight, one of the front disks on his RG500 Suzuki had shattered and Ross collided with the fence at the end of the straight at barely diminished speed.

Each year since the, the Sandringham Club had perpetuated his memory with a trophy race in his honour and, on the Saturday afternoon this weekend, that race had been run.

It was won by Bob Rosenthal on the Milledge TZ750 with Gregg Hansford on the TKA Kawasaki KR750 in second and, I deduce from his presence at the presentation, Mick Hone on his TR500 Suzuki in 3rd.

But it wasn’t JUST a race, it meant much more than that. In his 2014 interview with me at Lakeside, Bob confided that he never really intended riding the 750 in the King of the Weir race on the Sunday and was even less inclined to do so when he woke up and saw how appalling the weather was outside. He was, nevertheless, persuaded to do so and the rest, as we know, is history.

No, Bob’s primary goal on the weekend was to win the Ross Barelli. Why? Well, firstly because he hadn’t won it yet, but more importantly because Ross Barelli was Bob’s brother-in-law. Bob’s lovely wife, Lynn, was Ross’s sister and winning that race meant much more to Bob than winning the KoW the next day.

And, in fact, it is Lynn in the photo, about to hand the Ross Barelli trophy to Bob as I took the picture. It is amazing, as I said, how many times I have passed over that photo without realising the real significance of it. Incidentally, that’s Victorian motorcycling legend, Doug Sunderland, standing to the right of the photo. An unexpected bonus.

And, just in case you need reminding of Bob’s legendary performance in the rain on the Sunday, here is Rob Lewis’s brilliant B&W study of him splashing through the storm on his way to the chequered flag. 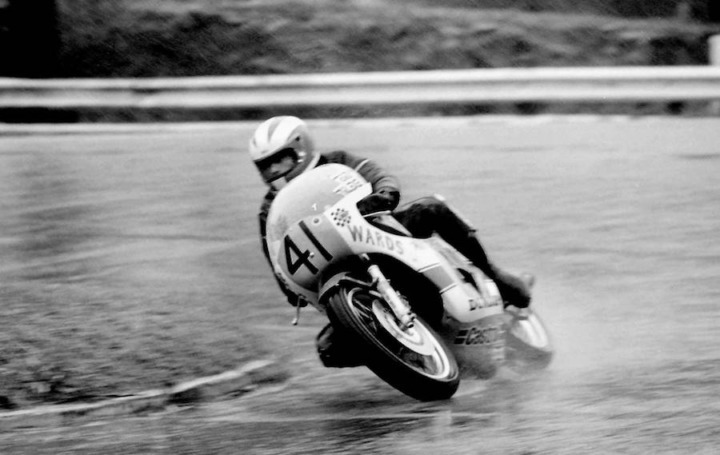 PS: A big thank you to one of my regular readers who pointed out that the young lad standing next to Dougie is Glenn Willing. So much history in one photo!

PPS: You may have noticed that there is someone standing directly behind Bob. In another shot of this series, it emerges that it is TKA’s Neville Doyle (RIP) who usually made it his business to be in and around presentation ceremonies. 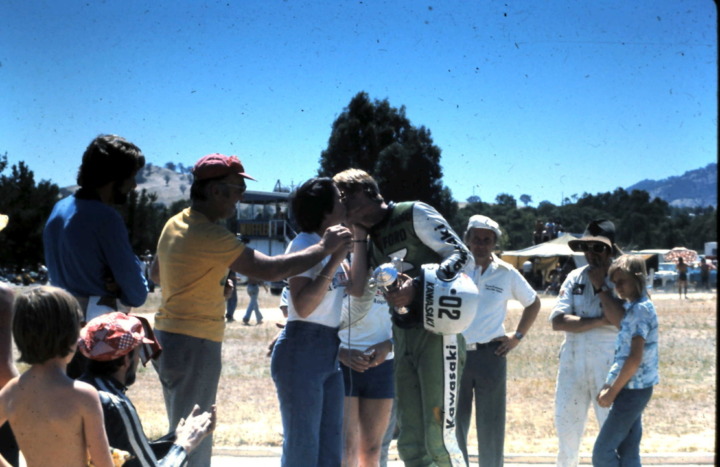