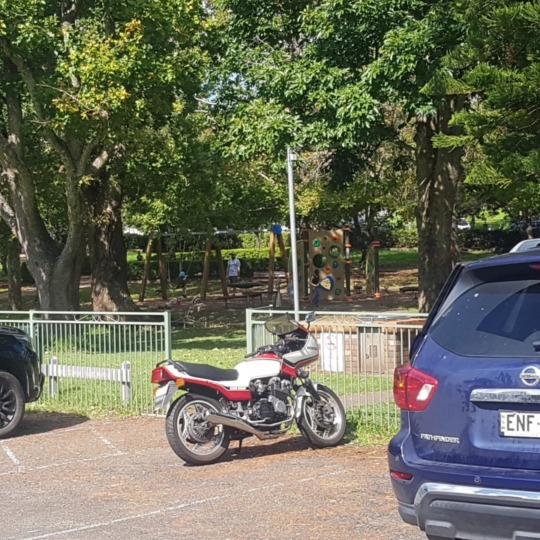 Finally it seems that the wet spell is over. After over 1000mm of rain (more than the yearly average) in just over 7 weeks, the sunshine has returned and I’ve been able to get out and about on the bikes. Last week I managed a run up Jamberoo Mountain to the Pie Shop and back and, while the road was wet and slippery, conditions were better than I had expected and it was very enjoyable.

However, every time I go into the shed I see Bexie staring at me accusingly from under her cover and I am reminded that she is overdue for a ride. One of the reasons I have been reluctant to take her out is that the lawn in front of the shed has been so wet that I don’t dare WALK on it, let alone run the bike, with its skinny little tyres, across it.

But needs must so, on Monday, I went out to the shed, switched on the ignition and attempted to fire her up, Pleasingly the dash lights came on and the engine cranked quickly. I was amazed since, by my rough reckoning, she had been sitting unstarted and un battery-tended for at least a couple of months. It took  a few cranks before she fired but, once she did, she settled down to a good idle and my ghast was suitable flabbered. Thank you, Guy Allen, for fitting Bexie with a lithium battery, I am sure that a normal battery would have been flat. I connected the battery tender and, within an hour, it was showing that the battery was 100%.

The grass looked dry enough so I rolled her out, suited up and then remembered that, since she was on Historic Registration, I’d better fill in my log book. Whoa, my couple of months was WAY out, Bexie hasn’t been out since last DECEMBER.

Despite this, all seemed well so I set out. As detailed before, I’m sorta landlocked at the moment with access to the mountain roads severely restricted and most local roads suffering from the after-effects of the rain event. Added to this was the fact that it was Easter long weekend and the roads were cluttered with motorists whichever way I chose to go. So, I kept it simple, Jamberoo to Kiama and home. I padded the route out a little with some side-road exploration and I got home having covered 80 trouble-free kilometres.

It never ceases to amaze me what a hugely competent bike the 550 is. 65 horsepower and relatively light weight means that it has more than enough performance and, despite the aforementioned tiny tyres, the handling is excellent. Even the much lampooned enclosed disk brakes are more than up to the task. The only glaring issue is the woefully inaccurate speedometer, due, I am sure, to the oversized front tyre which I must change back to a stock one one day. As it was a Double Demerits weekend, I was especially careful to watch my speed but, judging by the cars around me, 40km/h equates to 60, 60 equates to 80 and 80 equates to 100. Better to be under than over but I will get it fixed one day.

The countryside is achingly green as you’d expect after all that rain and the two photos below, taken from the slow vehicle lane on Jamberoo Road just after the Swamp Road turn-off show this clearly. It was only on Friday that Swamp Road was reopened. Those of you who know the area will know that the whole of the flatland in these photos was underwater for nearly two weeks. 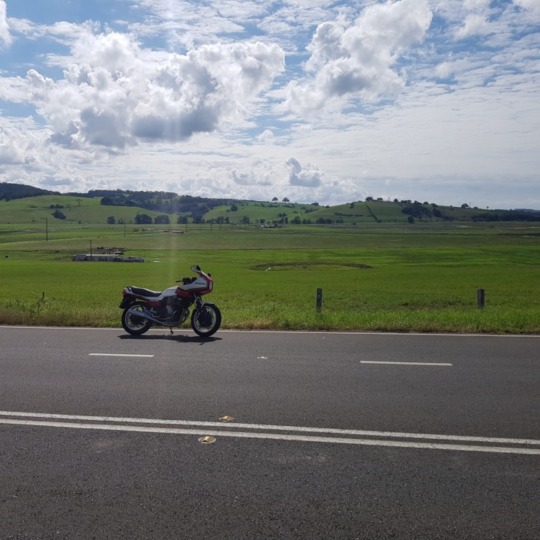 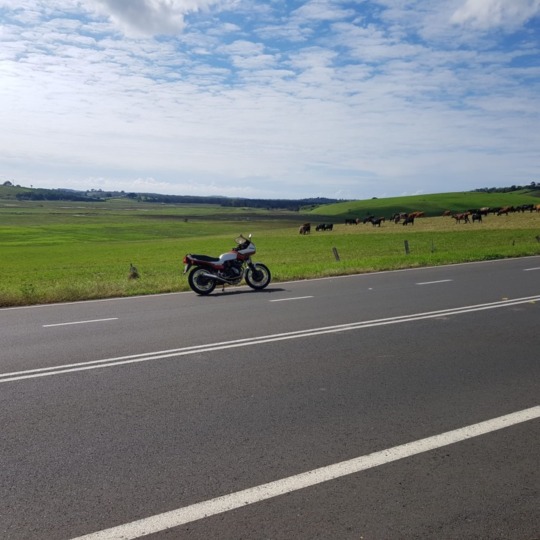 So, home and tucked away, my 40 year old bike got the job done again.

That was Saturday and, since the weather was still good, I dragged Rhonnda out on Sunday and attempted to duplicate the run. Most of it was great though the traffic was pretty dreadful. Since Jamberoo Mountain is the only way to the Highlands apart from Picton road and it WAS the Easter weekend, I was expecting that it would be trying.

It was a great deal more trying than I expected, however, with traffic crawling up the mountain, stop-start fashion. It wasn’t until I reached the second last corner that I found out the reason. A motorcyclist had over-cooked the tight right-hander and clobbered the armco. Police and ambulance were in attendance, the ambulance just leaving as I arrived. By this stage I was looking for an “out” so I turned in the Lookout road, turned around and headed back down.

Amusingly, the young constable directing the traffic was standing in the only lane available and, in attempting to get past, I almost ran over his toes. Lucky I didn’t or I’d have need to call a toe truck.

I came home around the back way and up through Marshall Mount. This particular road is very poor at the best of times and the rain has done it no favours. It did have the benefit, however, of being traffic-free so I settled for that.

This morning a FB friend posted up that he had been to Kangaroo Valley yesterday so hopefully that means that the mountain road is open. He did remark that potholes were a problem but I’d be happy to dodge potholes just to be able to ride some different roads.

And, speaking of dodging, the roads authority have announced that the Putty Road will be closed for 6 days this week while major work is done in the aftermath of the rain. A rumour is circulating that the closure is going to be a great deal longer than that and the merchants along the road have steam coming out of their ears at the moment because the announcement was made late Thursday afternoon just before the Public Service closure for the Easter weekend. I’m no conspiracy theorist but that sounds a bit suss to me.

So, two rides, two different bikes and two different outcomes. But, the weather is beautiful, we’re having a late Summer and I’m going to enjoy it as much as I can.