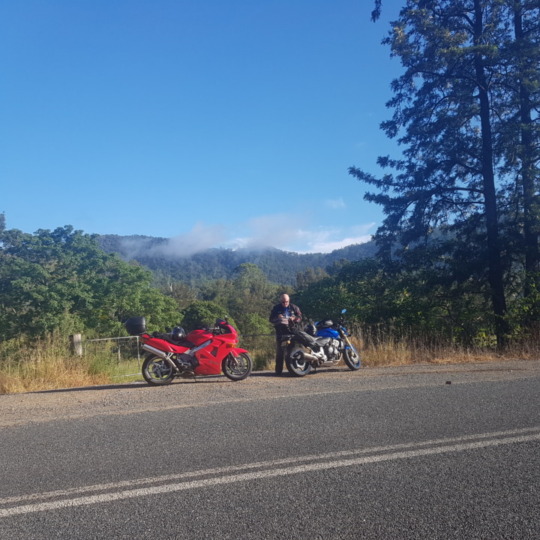 After a pretty ordinary night, it was great to contemplate getting on the road again. But, as Clarkson often says, there was a problem. The problem was that it was 0500 and it was still dark. Having “enjoyed” the “luxury” of the Apsley Arms, we were more than keen to leave it behind. Of course, that wasn’t going to happen, especially knowing the reputation of the Oxley Highway and the wildlife that surrounds it, so we settled for a VERY leisurely breakfast in the common room and an equally leisurely pack up and prepare of our gear.

By the time we left it WAS light (but only just) and, while the sky was crystal clear, the humidity was high and the roads were wet from overnight rain. Those of you who know it will know that the top part of the Oxley is made up of long straights that undulate a great deal and that head directly east. And the sun was rising. Well, the rising sun would not really have been such a problem if it hadn’t been for a band of fog that settled across the road and made finding your correct position on the road an almost impossible task. I was down to about 30 km/h in 3rd gear for long stretches, frantically seeking out a reference point that would let me know where exactly on the road I was. It sounds harrowing and it was.

Somehow we made it through and, as the road started to dip into the tree line that delineates the straight bits of the Oxley from the twisty bits, the road was drier, the sun was now obscured by trees and it was time to have some fun. A driver in a ute had passed us while we were pootling along but he got scared of the corners so we passed him right back and settled down to explore one of the greatest roads in NSW.

As always, when we get to the twisties, I pull over and let Paul go by. There is no room for ego when you know your riding partner can get the job done better than you can. I know what needs to be done and I know I can do it, but, every time I start to get daring, something sneaks in from the back of my mind and reminds me just how much a big accident can hurt. Fortune MAY favour the brave but try telling my brain that.

Nevertheless, I kept up reasonably well and was pretty pleased when, about half way down the mountain, Paul pulled to the side and let me by. Here is where the acid test starts. By now I had the feel for the road, the tyres were warm and I felt a bit more confident. I must say here that I always prefer uphill corners to downhill ones and the Oxley west to east, is ALL downhill. So it came a huge surprise to me to find that, suddenly, we were nearing the bottom of the mountain. Some road works controlled by stop/go lights gave some respite but we passed the old farm shed on the left and the 45kms of winding road sign on the right and, a couple of kms further on, we pulled in to catch our breaths and check tyre temperature. They were HOT.

The scenery was fabulous, lush green as far as the eyes could see and wisps of cloud hanging on the edges of the escarpment. Could it get any better than this? 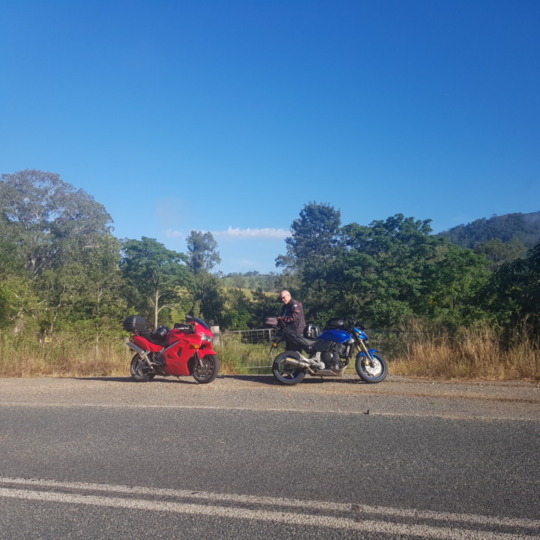 It was still way early, we had made good time. The object this Sunday was to do at least three laps and so we geared up, turned around and headed up the mountain again. It only took a few corners for Paul to disappear from sight; he had his serious face on. I know better than to try and catch him or even stay with him when he’s in this mood so I just concentrated on riding my own pace and polishing the corners.

With the pressure of trying to compete taken away, I relaxed and started to really enjoy the ride. Along with the relaxation (probably counter-intuitive, I know) the pace picked up and I found myself monstering the corners like I used to be able to do. I was amazed when I looked up and saw Paul’s bike parked by the roadside and realised that we were at the top again; where did that 45km go to?

We turned around straight away and headed down again. The difference between the last lap was like chalk and cheese. Paul motioned me to go in front and I tried to ignore that he was behind me. Some traffic started to appear and I knew we had done the right thing by hitting the bends early. This became even more apparent when I rounded the right-hander just below Gingers to see two R1 Yamahas on my side of the road going at warp speed. Luckily for me (and them) I always ride with something in reserve and I was able to slow and avoid. Not all idiots travel in 4 wheel vehicles.

Nearing the bottom we stopped at a red light with a ZX14 in front of us. He motioned me forward and said, “You go in front, my back tyre is shagged.” I felt sorry for him and we moved on. Whether it was lack of planning or an excessive use of the throttle that had worn the tyre out, in any event, the Oxley is NOT the place to be winding it on if your back tyre is marginal.

We stopped again at the bottom and reviewed the situation. I’m sure Paul could have done another lap but my frozen shoulder was screaming that it had had enough. I was pleased when Paul said that I shouldn’t feel bad about being “slow”, he reckoned that I am riding the best he has ever seen me ride and that includes before my big prang in 2010. Nice to know. 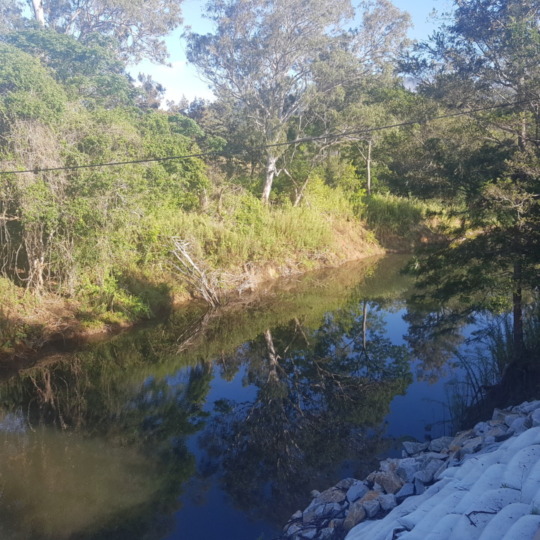 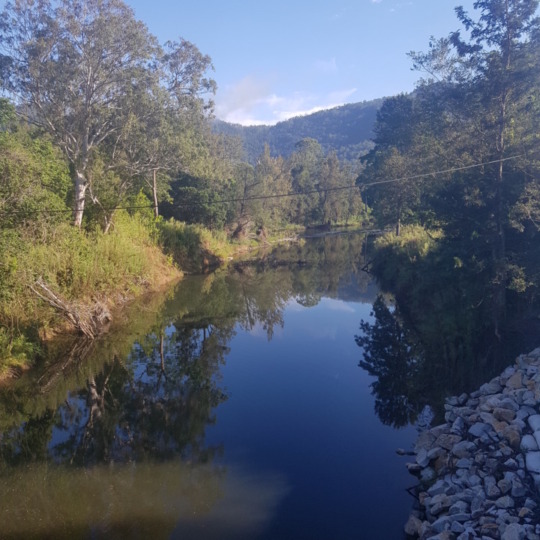 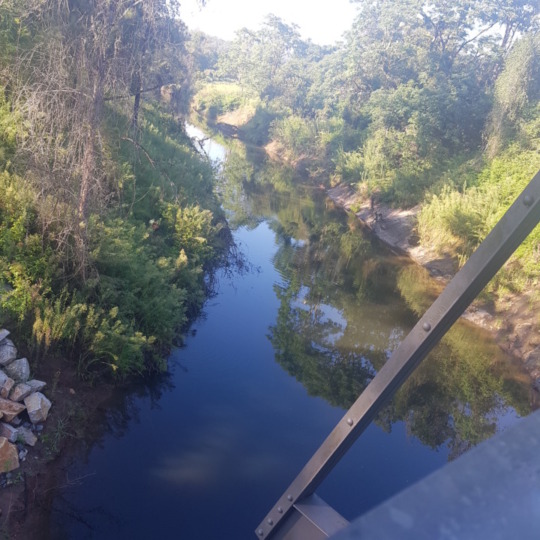 The creek at the bottom of the mountain is very picturesque.

It’s just over 70km from the bottom to Wauchope and it sure felt like it. Having had cereal and some toast at around 0500 we were starving. We found a great little café in the main street and replenished. Sitting outside at a table, we chatted to the locals who paused to say hi and admired a very nice Austin 1800 London to Sydney replica rally car that was parked nearby. 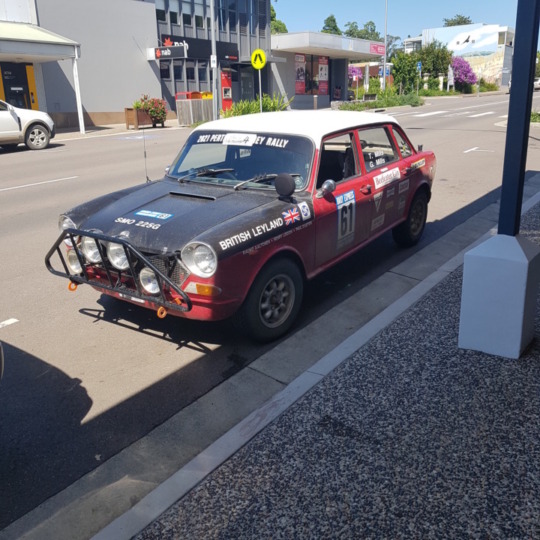 On to Port Macquarie where we decided that, having endured the poverty pack night on Saturday, we’d lash out a bit and get a good room, and good it was. We showered, went for a long walk along the waterfront admiring the painted rocks before having a late afternoon nap. I promised myself that I wouldn’t do this on the trip but the concentration of navigating the mountain took its toll.

Dinner in our favourite Thai restaurant, another stroll around the city centre and back to the room where, despite the afternoon nap, sleep claimed me again. I must be getting old, I think.

It had been a fabulous day, not too long on the mileage but long on enjoyment and honing the skills. It’s no wonder I slept like a top.