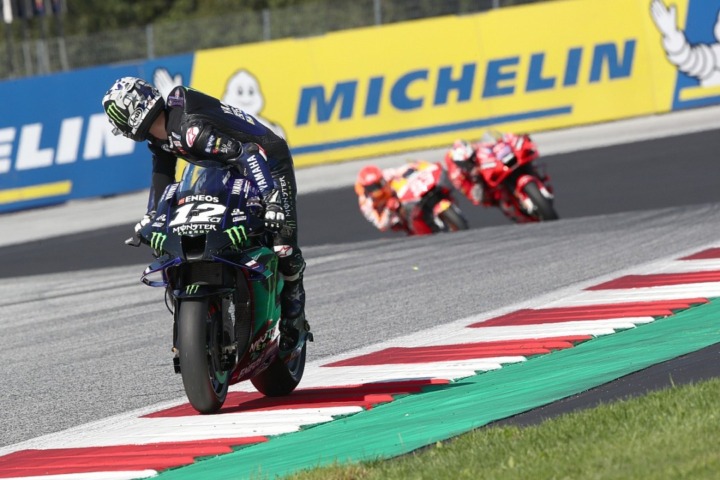 Last evening the internet erupted with the news that Yamaha had stood down their factory rider, Maverick Vinales, from this weekend’s Austrian Grand Prix over an unspecified activity that Yamaha said was likely to have resulted in danger to his own bike and those of his other competitors. The wording was so bizarre and unusual and asked so many more questions than it answered that it was always going to result in frantic investigation until the truth behind it was determined.

Firstly, some background. It’s no secret that Vinales has been unhappy at Yamaha for a long time and this has resulted in a parting of the ways that will see him leave the team at the end of the season. The timing of his announcement couldn’t have come at a worse time given that all of the top available riders, ones who could have been potentially asked to replace him for 2022, are in the middle of the customary two year contract cycle. None of these will be available until the end of 2022 unless they choose to break their contracts (doable but expensive). More on this later.

In my opinion, Maverick jumped the shark a couple of seasons ago and it has only been Lin Jarvis’s belief in him and that he would, eventually come good, that has kept him in the job. He is a brilliant Saturday rider, one of the very best but his performances on Sunday have been mediocre at best. He struggles to make an impression in the early race stages, even when starting from pole, and he drops through the pack like a stone while the fuel tank is full, only recovering his momentum and setting great lap times later in the race when it is all too little and too late. Wins only have seemed to come when the conditions have been perfect, when he has started from pole and been able to escape having to be involved in a fight for position and, even then, he has shown a “glass jaw” when under extreme pressure, witness his Phillip Island disaster in 2019 while contesting the lead.

You can’t escape the eagle eye of the TV camera and the scenes in the pits showing him at his petulant worst have been all too common in recent years. I doubt that Yamaha management hesitated for a second when the suggestion of him leaving the team arose. “Hate to see you go, here’s your hat and coat.” as my father used to say.

But it has gotten worse. Following on the announcement of his departure, his performances have fallen off a cliff. In the last two Grands Prix he has finished last while his team mate, on the same bike, has marched inexorably onwards to what should be his maiden MotoGP title.

So, why the stand down and the announcement that should surely see the end of Maverick’s MotoGP career? Well, as I said before, secrets are darn near impossible to keep in a scrutinised world and it appears that, in the latter stages of last weekend’s Styrian Grand Prix, Maverick was seen (and heard) red-lining his Yamaha in the corners and holding the bike flat out in 5th gear down the straight in an obvious attempt to blow the engine up and so avoid the ignominy of finishing last (again) in the race. This has been reported by flag marshals at the various corners around the track.

It was being reported last weekend that Maverick was headed for a seat at the Aprilia team next year (surely and embarrassing demotion in itself) but that now seems highly unlikely; I don’t think this latest temper tantrum is going to endear him to the Noale factory who have to watch ever penny of their meagre budget. Is there somewhere else where his undoubted talent could be used? I don’t think so; I think he has burned any available bridges. It looks like being a very sad end for a rider who promised so much but never quite delivered.

For the record, here is the snapshot of MV’s career.

Pretty impressive, eh? But note that he has only been to win one World Championship in any of the categories in which he has competed. That surely is a telling statistic.

The stand-down for this weekend is now official, what do Yamaha do for the rest of the season? Do they give him a severe ticking-off, dock his pay and tell him to be a good boy for the rest of the season? I can’t see that because, even if they were to do so, there is no likelihood that his performances will improve given that he has lost interest and that he hasn’t been able to deliver for quite some time. Japanese bosses are not given to any sort of display that will cause them or their businesses to lose face and this public fracas has surely done that. Yamaha’s test rider, Cal Crutchlow IS available and could be snitched away from his temporary assignment at PETRONAS but that leaves the Malaysian outfit scratching for a replacement until Franco is fit.

So, what will Yamaha do, assuming that Maverick will not be back (and that is my assumption)? Well, as noted above, the timing is bad with most good riders locked into contracts till the end of next year, but it’s not as bleak as it seems, I don’t believe. It is becoming an increasing pattern that teams are looking for younger riders and the pool of talent in Moto2 and Moto3 is deep and impressive. Oh, and forget the American, with the MotoGP championship becoming increasing Euro-centric, I don’t think the Japanese factories need the American market enough to cater to American sensibilities in selecting their riders. Now if there was a JAPANESE rider available that would be a very different story.

It is going to be a difficult time for the boys in blue and they can thank their emotional star for all the drama. I have to say that I was always impressed with Maverick’s speed but I always thought that he was a much better rider than he was a racer, and I’ll leave it at that.