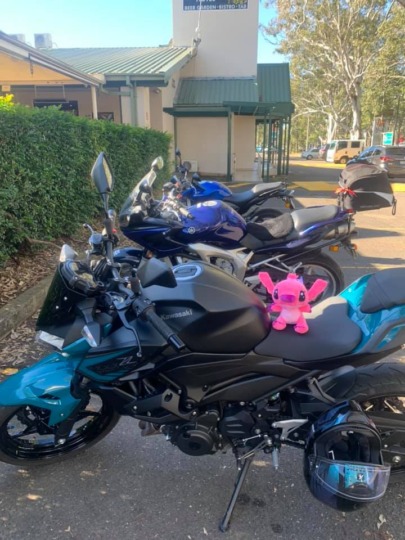 Last Sunday was my first ride since my “off” at the end of February and my first ride on the Hornet (apart from taking it to the mechanic’s place to get the Blue Slip done). One my friends organised a short day ride up to Penrith and back and I thought it would be a great way to ease myself back in and also get a better assessment of the new steed.

On both counts the ride was very successful. It wasn’t anywhere near as cold as I thought it was going to be so that made for a pleasant day anyway. As a hit-out to determine my level of recovery from the accident it was also successful as I arrived home having experienced no discomfort in the left shoulder at all.

The bike was quite a different experience and is nothing like the VFR, to nobody’s great surprise. Yes, it’s lighter and much easier to lug around there is sure no shortage of power but the engine’s characteristics are VERY different. It’s an engine that likes to be revved, certainly but getting used to an engine that is doing 6000 RPM at 100 km/h rather than 4000 RPM will be quite a challenge. “Normal” shifting means that you arrive at cruising speed very quickly but it still feels like you should be shifting up into another gear to bring the revs down. The intermediate gears seem to be almost unnecessary.

But that’s not to say that you couldn’t get used to it, but it shouldn’t be thought that the torque is delivered high up in the rev range because, even at highway speed, there is heaps available for overtaking without having to drop down a gear or two to get it into the “meat”.

The riding position is comfortable and easily allows me to adopt my usual “balls of the feet on the footpegs” position without cramping up my legs. The lack of a fairing doesn’t seem to be a problem though I wasn’t riding real fast as one of the riders was a “P” plater and restricted to 90 km/h. At higher speeds the wind buffetting could become a problem but I will have to wait and see for that one. The seat, despite being narrow, is very comfortable and I can put both feet flat on the road when stopped which is a distinct advantage.

I’ve now been able to adjust all levers to suit my ergonomics with just another tweak of the brake lever on the handlebars still required. The mirrors, appallingly close in standard form, have been made usable with the addition of a couple of alloy “extenders” which make them about 2″ wider than standard, well worth the $13 from ebay.

While on the road I learned to adjust the chain as well as finding out that an essential spanner needed to do the job was missing from the tool kit. When I got home I found that i have 4 of them in my “leftover” VFR tools so that problem is solved.

All in all it was a very promising first hit-out and started answering the questions I have been asking. As it is, however, it won’t be replacing the VFR just yet as I need to do a couple of longer rides to see how it handles my “normal” riding regime.

The three of us who rode on Sunday all rode blue bikes, thus the title of my article.

Sachsenring this weekend, Marc Marquez’s favourite track. The Monday test after Catalunya was apparently very successful with Marc completing over 70 laps in the day and pronouncing himself very happy with the progress of his recovery.

Both the Aussie kids riding O/S last weekend had dramas. Harry Kouri had a crash and broke a metatarsal in his left hand so was a DNS. Jacob Roulston had a bizarre fault in his rear light (wet race) that saw him have to stop out on track and rip it off as it was looking like tangling up in his back wheel. He got going again but didn’t finish in the points. Jacob Kelso races this weekend in the big game, Moto 3, replacing the injured Max Koffler. Nothing like being thrown in at the deep end.

Former 350cc ace and production hero, Johnny Pace had a bizarre accident at home, falling off a ladder and ending up in ICU with serious head injuries. No word on his progress at this stage but it’s all rather worrying.

My mate in Melbourne sent me the last installment of his payments for the Gold Wing but how he’s going to actually get it back to Melbourne with lockdown and all is still a bit of a mystery.