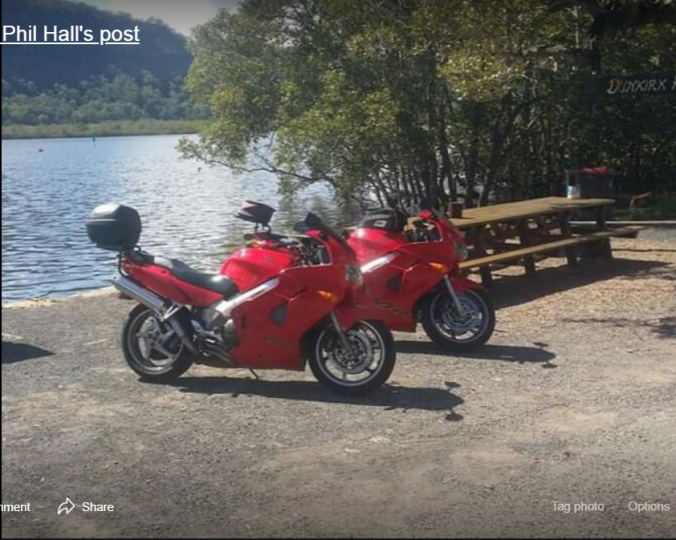 Looking at my photos archive it is apparent that I haven’t done any long rides since November last year. Now, before anyone starts calling me a part-time biker or such-like I have to say that the conditions over the last few months have not been exactly conducive to touring though there have been plenty of riders who have braved the elements. Since November 2019 we have had an extended period of ferocious bushfire activity on the east coast, activity which has only recently been declared as “over” Following along the fires subsiding, the many roads that are my favourites were declared to be “off limits” while road reconstructions took place, fallen trees were removed and safety for the travelling public was re-estabilshed.

Then, no sooner had we breathed a huge sigh of relief than the east coast was deluged with around a month’s worth of rain. At my place we recorded over 400 mm of rain, the vast percentage of that being within the space of a week. Again, hardly conditions in which to go riding.

Anyway, the upshot of all that is that it has taken until this week for all the ducks to line up and for me to get the opportunity to go on anything but a local ride. Given the devastation on the Putty Road and the huge disruption to trade at the Grey Gum Cafe it was logical that the ride be a Putty one, firstly to touch base with Kimmie and see how she had survived the ordeal but also to check out how the bushland was recuperating after the fires. While the fires were in progress it was common for the loonies who rejoice in despair to say that the bushland and the wildlife will never recover from these “catastrophic” events and it was equally common for me to refute he naysaying and note that the Australian bush NEEDS fire to regenerate.

It didn’t take long to see just how true this was. From the bottom of the Colo Valley where we stopped for a very pleasant brekkie at the aptly-named Colo Riverside Cafe… 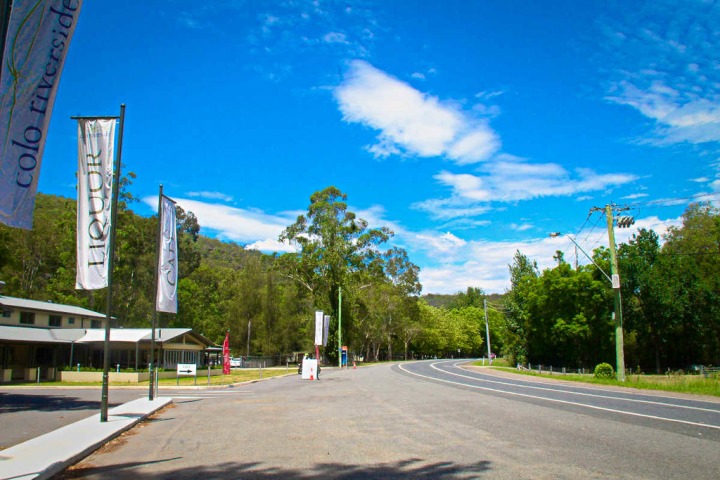 ..we then climbed up the mountain through those glorious sweeping bends and started across the ridge that lasts all the way to the village of Colo Heights. It was immediately clear that the bush was regenerating at an amazing rate. As you sweep along the ridge you can see down into the valleys on either side and they are GREEN!!!!!! I mean, amazingly green. The burnt trees are already sprouting new growth and the forest floors are covered with new growth as well. In some places it was clear that they had been recently burnt, but a cursory look would almost convince you that they hadn’t. I’d seen post-bushfire regeneration before but I don’t think I have ever seen it happen so quickly. The reason for it, of course, is that the fires were followed almost immediately by torrential rains, ideal conditions to sponsor re-growth. There is another factor, however, that I hadn’t considered. At breakfast yesterday morning, my good friend, David Thompson, science teacher and knowledge base in matters like this, added that, before the rains came, we had experienced some huge dust storms which brought in copious amounts of topsoil from out west which was dumped on us. The rain then consolidated this into the existing soil and provided the ideal conditions for re-growth.

Suffice it to say that the bushland is regenerating at an extraordinary rate, unprecedented, perhaps, even.

Now it wasn’t just this amazing turn-around that was obvious. The stunning success of the bushfire authorities and the Rural Fire Service in limiting losses along the Putty are beyond any words to describe. The village of Colo Heights was surrounded by the fires yet not one single building was destroyed. Even the outlying areas showed evidence that the fire had come right up to property boundaries but had been stopped at the last minute. Colo Heights clings to the ridge, it is over 2 kilometres long of houses, businesses and farms, clustered along the main road and it was untouched. It was truly a testament to bravery of an extraordinary nature and a vindication of the authorities’ policy of property preservation rather than wasting resources fighting an unwinnable war against the fires.

Once along the flats at the bottom of the mountain the extent of the fires again became obvious as did the amazing renewal that has already become well established. It won’t be too long before the bush is looking like it looked before the fires swept through. Coffee at GGIC and then onwards to Cessnock, our overnight stopover. The Ten Mile is in a mess. It suffered greatly through burning trees that fell across the road and scarred the bitumen as well as many rock falls that damaged the surface and the surrounding fences and barriers. Remediation IS taking place but it’s going to be slow and, if you’re going to ride there, be prepared for long waits while road works continue.

We called in to see Lenny, our old school mate; old friends are the best friends, we went to BHS together from 1962-65. Once settled in at the motel we wandered downtown on foot to check out a possible venue for dinner. It was very sad to find that our favourite Indian restaurant in the main street is closed. I’m not really an Indian fan at all but their food was excellent. Later we found the East Cessnock Bowling Club where good-priced meals are served on gigantic plates. We waddled back to the motel and slept the sleep of honest labourers.

In the morning it was looking a bit cloudy (but it had been cloudy all day on Wednesday too) but we were going home anyway so we couldn’t wait around. Breakfast at Pokolbin Village at the cafe that has been our favourite for years. Unfortunately, the previous owners have gone and the place is unspeakably hipster and the menu choices very limited (what cafe DOESN’T serve raisin toast?) A couple of crumpets and a pot of tea and it was time to leave; I doubt I’ll go back. We had paid when we ordered (I wonder if they knew it was us?) and, as we were getting ready to go, we noted that it had started raining, just lightly, but it WAS raining. But we had to get home so… Just out of Pokolbin we hit a huge rain squall. Visibility was reduced, nowhere to shelter and neither of us had packed our “wets” so, press on. The upside was that it looked local and the sky ahead was clear. By the time we got a couple of k’s further along the rain had stopped and we were hopeful that continuing to ride would dry out the wet bits of our clothing.

At Broke we had to make a decision. Right and back down the Putty and endure all the roadworks again or left and test out the challenging Wollombi route. We chose left and there were several occasions where I wished we hadn’t. Evidently the rain squall that we had caught outside Pokolbin had moved south and the road surface was VERY sketchy indeed. Throttle control and anticipation of the many ummarked corners was of the essence. Carefully avoiding the locals who drive down the MIDDLE of the road in their 4WD behemoths, we got through to Jerry’s Cafe at Kulnurra. No refreshments at this stage, we had to hustle.

Wiseman’s Ferry Road hasn’t improved any but, despite this, it didn’t bug me near as much as it has in previous trips. Having said that, I’d been feeling for the whole trip that something wasn’t right, I just couldn’t quite put my finger on it. Figuring that I was just “rusty” I pressed on. By the time we reached the cafe at Spencer (see above) the sun was shining, we were dry and we were ready for some sustenance. The cafe owner is a keen motorcyclists and goes out of his way to make riders welcome. Sadly, the cafe is on he market as his wife is in Stage 4 kidney failure and they need to buy a dialysis machine and selling the cafe will fund this purchase. We wished him well as we sat by the river, having a Devonsire tea. 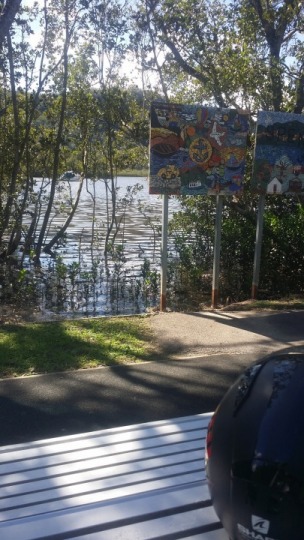 Then it was on again. I just love all the sweeping corners and elevation changes that make up the road between the ferry and Pitt Town. We passed straight by Windsor, stubbornly resisting the call of the crepes shop and finally pulled in at our favourite cafe, the previously-named Peppercorn at Mulgoa. Quite why owners change cafe names that then have to re-establish their reputation is beyond me, and why do they choose such STUPID names? I mean, really, “Black Cat, White Cat.” what a dumb name. “Peppercorn” was so much better, named after the big peppercorn tree in the front yard. People can be weird sometimes. Having said that, their bread and butter pudding was excellent and fuelled us up for the final push to home. 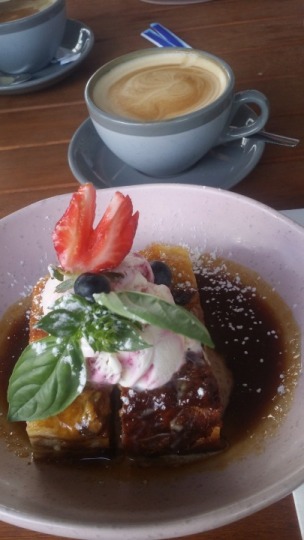 Along the ultra-boring Picton Road and down Mount Keira I again felt a bit “iffy” and it was good to get home in daylight. The bike was FILTHY, courtesy of an extended roadworks section near Central Mangrove where the water truck had JUST watered the new road base but I was too tired to wash it right then. About 700 kms for the trip. I could easily do that in a day and have done so many times, but breaking it up into two made for a more relaxing ride.

And that “iffy” feeling? Checked the rear tyre pressure yesterday morning, 31 psi, about 10 down on what it should be. Don’t trust servo air pressure gauges. Despite this it was still a great trip, so good to get out and put some miles on the old thing.

And while I’m here, the effects of the Corona virus outbreak are being felt in all areas and particularly motor sports where cancellations/postponements are arriving thick and fast. At the moment the first full MotoGp event looks like not happening until early May.

Another nursing home concert this week also. Two of our “regulars” were unable so it was just Elwyn and I with Jan doing the mixing. We did the usual group songs together and then Elwyn and I did some extra solos each and we comfortably and enjoyably filled in the hour. I am waiting to hear from our venues about the possible impact of the virus, though. I am expecting some cancellations, unfortunately. I can understand why they might have to do this. 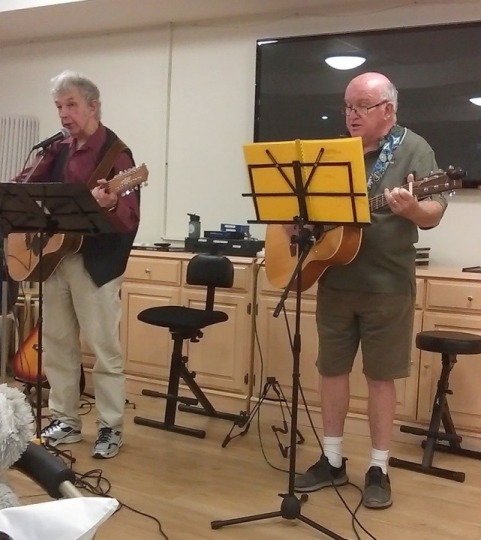 That’s all for now, thanks for reading.