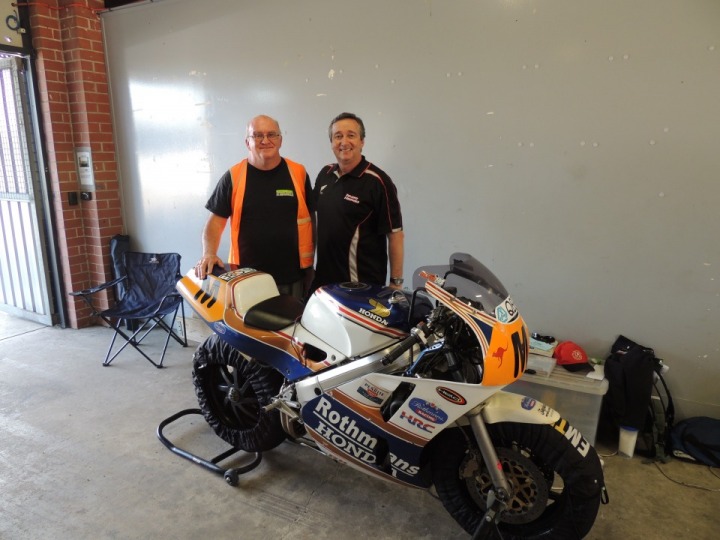 As a (retired) teacher of English it is becoming a constant annoyance to me how the language is being mangled in the media and in general usage. Yes, I am aware that language is an organic thing and that it is constantly changing. And, yes, I am aware that new words are constantly being added, old words are falling into disuse and existing words are being used in a way that they were not being used a decade or even longer before.

Nowhere is this more evident than in the area of sports reporting where the reporters’ grasp of the basics of English is often as tenuous as the footballer’s grasp on the wet football.

This week I want to look at two words in the sport’s reporters vocabulary that are not only over-used but often misused altogether. They are both nouns and are regularly used in reference to participants in various sporting endeavours. I then want to see if they apply to our chosen passion, motorcycling.

The two words are “hero” and “legend” as in the title. I will deal with them, however in the reverse order to this for reasons that will soon become clear.

Here is the definition of the word “legend”

a non-historical or unverifiable story handed down by tradition from earlier times and popularly accepted as historical. A  collection of stories about an admirable person. A person who is the center of such stories:

Now it is clear from the definition and from common usage that, to call a person living today a legend is incorrect. Davy Crockett was a legendary person but a modern-day footballer, regardless of his level of skill, his performance or his stellar career cannot be a legend. And, in motorcycling terms, as much as I admired and respected Allan Kempster, for example, he was plainly not a legend, though the term was often used in reference to him.

Here is the definition of a “hero”

a man (person) of distinguished courage or ability, admired for his/her brave deeds and noble qualities. A person who, in the opinion of others, has heroic qualities or has performed an heroic act and is regarded as a model or ideal:

People who would qualify for this description could be a fireman who risks his life to enter a burning building and save a life, a nurse in a war zone who continues to tend her patients while under bombardment or, in a sporting sense, someone who does something incredibly brave or admirable, like Formula One driver, David Purley, who stopped his car near the scene of his friend, Roger Williamson’s burning wreck and tried to rescue him while not receiving any help from the marshals or other track officials. A truly heroic but, ultimately fruitless endeavour.

So, let’s look at motorcycling. Do we know any motorcyclists who could be legitimately called legends? No, we don’t because even though some (Marc Marquez?) appear to be endowed with supernatural powers, legends belong in the field of fiction only.

Do we know any who could legitimately be called heroes? In terms of performing an heroic act, probably not, although I seem to recall that the late Mike Hailwood risked his own life to save a fellow driver who was trapped in a burning car in a similar situation to the David Purley/Roger Williamson one.

Much has been made (and justly so) of Marc Marquez’s Usain Bolt effort during qualifying a few years ago at Austin. Running the length of the pit lane in full racing gear, climbing over the pit wall, getting out on the second bike in the shadow of the time-out for the period and still putting the thing on pole is as close to legendary as we are probably likely to see in our lifetime. But heroic? Not really. Nobody’s life was at risk and the only person to benefit materially from his effort was him.

So, if we can’t really apply either of those terms to motorcyclists in a strict sense, is this article going nowhere? No, it isn’t because, through usage, if not definition, motorcyclists, and especially motorcycle racers CAN be heroes. They can be OUR heroes, the people to whom we look up as being those who perform feats to which the rest of us can only aspire. And I’d like to move slightly to the left and give you the list of MY motorcycling heroes. The caveat here is that these are riders who I have actually SEEN performing these amazing feats. Everyone’s list will be different but this is mine. Also, please note that the list is not in any particular order.

1 Gregg Hansford. I count myself privileged to have seen Gregg at his very best, before the knee injury at Assen crippled and ultimately ended his motorcycle road racing career. Tall,        amazingly handsome, genial and extraordinarily talented, Gregg was arguably the best motorcycle road racer I have ever met or seen. It is appropriate that he heads the list just on performance alone but also because this week has marked the 25th anniversary of Gregg’s death.

Of course there are others on my “heroes” list but I am limiting myself to those about whom I can comment directly. Having said that, my all-time hero is Freddie Spencer (pictured above with me and his bike at Eastern Creek in 2015) . How I would have loved to have seen him race.