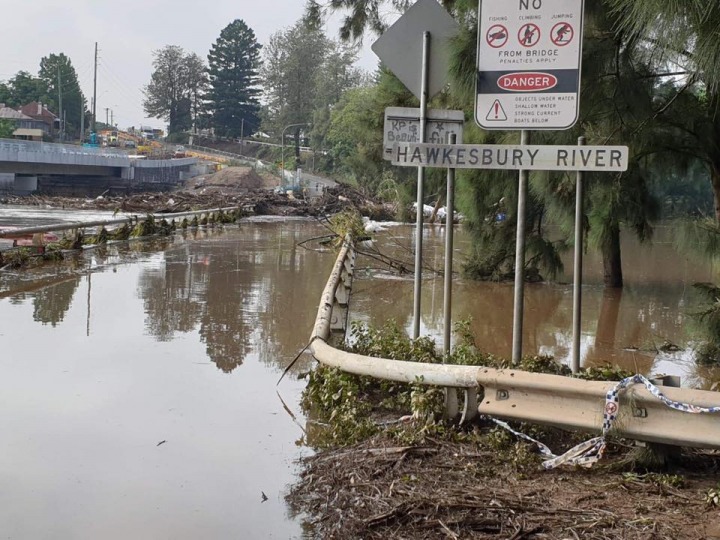 Those of you who ride the Putty Road will recognise this location. It is the bridge over the Hawkesbury River at Windsor. Well, it is where the bridge IS because the flood waters from the weekend’s deluge have not yet receded enough to be able to see it. On Sunday the river, swollen with extraordinary rainfall and backed up at the ocean outfall by a king tide, was lapping the underside of the NEW bridge on the left of picture.

It truly has been an amazing 5 days or so. I have a rain gauge in the back yard and, since last Friday, I recorded 376mm of rain. In the old money, 25mm was an inch of rain so we’ve had 16 INCHES of rain since Friday. I hasten to add that other places have recorded much higher than this. The Famous Robertson Pie Shop at the top of Macquarie Pass, maintains an official weather station for the Bureau of Meteorology and has been keeping records since 1985. At the shop they recorded 397mm on Sunday ALONE.

As you can imagine, the chaos has been widespread. Many roads are still closed, several rural communities along the coastal fringe are still isolated either by slowly-receding flood waters or by roads that are impassable since bridges have simply been washed away and people are already starting to clean out properties that were flooded.

Oddly, the same BoM that keeps these records and provides weather forecasts, told us at the height of the bushfire crisis that we were not to expect any significant rain until April 🙂 Speaking of the bushfires I am delighted to report that all of the major fires, some of which have burned since November and have consumed millions of hectares of bush along with towns and peoples’ houses, have been declared OUT, what a relief.

The arrival of torrential rain so soon after the fires is not an uncommon weather pattern and it does bring with it some other problems. With so many trees being burnt, their roots are not holding the soil together and widespread erosion of fire-affected areas is taking place. People who have been struggling to re-establish their houses and businesses have been prevented from doing so and business owners who have been hoping that the tourists would now return and provide some financial relief are stymied yet again as people stay home and hunker down till the deluge stops.

BUT, the sun is shining, the water is evaporating (driving humidity levels through the roof) and we see blue sky for the first time in weeks. Maybe tomorrow I might just be able to get the bike out and go for a ride, now wouldn’t THAT be wonderful?