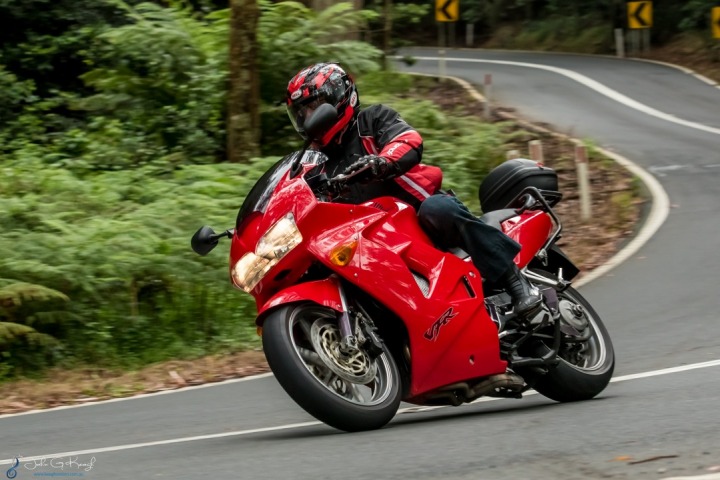 It hasn’t really been the best weather for riding here on the east coast of good old Oz. Living, as I do, next to the Pacific Ocean, I have three directions in which I can ride and I use all three on a regular basis. North is my regular Putty Road ride (though that is strictly north WEST), south is my Princes Highway ride down the coast and west is my regular Southern Highlands route. All of these have multiple options within the general direction of the main roads so you could say that I am spoiled for choice. You may have noted that I have not included directly north, and for good reason. There is ONE good ride directly north and that is the Royal National Park which IS a great ride (especially mid-week) but it is ridiculously speed-limited and viciously policed (and justly so as the local Rossi-wannabees use it as their local race track) Any further north of the RNP gets you into the southern suburbs of Sydney and I’d rather eat worms than duel with the homicidal Sydney motorists.

So, yes, I have a myriad of choices but, sad to say, since around Christmas time I haven’t used any other them.  There are several telling reasons why.

Firstly, the VFR has been playing up. I’ve had it for 3 years now and put over 30000 kms on it in that time and it’s never missed a beat. But, just before Christmas, while heading off to Nowra Speedway, I looked down at the dash and the Fuel Injection light was on. Bugger. I pulled over to the side, switched the engine off, restarted and the light stayed off. For about 5 kms and then it came on again. Fortunately I wasn’t far from home so I hot-footed it back home, parked the bike in the garage and took the car. By now something else significant was happening that was going to majorly impact my riding plans and it had nothing to do with the bike, and this is the second reason why I haven’t been riding.

You’d have to have been hiding under a rock to not have discovered that, since last November, the east coast of Australia has been devastated by wicked bushfires. Not only did the existence of them, mostly along and around about ALL my favourite riding roads, restrict my riding, but authorities in charge of fire-fighting efforts told us NOT to travel to these areas at all unless our travel was essential. Sadly many people did not heed the advice and ended up being an unnecessary and annoying impediment to the fire-fighting efforts. I wasn’t going to be one of them. The Putty Road, for example, was closed for weeks while the firies tried to deal with a raging fire in impossible terrain. And, even when the fire was under control, the road and the infrastructure around it had been so badly damaged that all but essential travel along it was still restricted to local residents and fire-fighting personnel.

Even when these roads were opened I still didn’t go. Why? Because I’m selfish and I didn’t want to see the countryside that I have loved for most of my adult life burned and blackened beyond recognition.

These fires have continued to burn, mostly uncontrolled, since November. Last night the RFS announced that the Currowan fire, south of me, that has been burning for the last 74 days, has now been extinguished, not by RFS efforts but by a monsoonal and truly Biblical band of rain that has now hit the east coast. To date here at my place, we have had over 200mm of rain in the last three days. Herein is another reason why I haven’t been riding.

The poet said of Australia that it is a land of “droughts and flooding rains”. The last few months has seen this in stunning reality.

So, back to the bike. A couple of weeks after this first incident I decided that it was time to bite the bullet and go see Kimmie at the Grey Gum Cafe and let her know that I hadn’t forgotten about her. I’d barely got a couple of kms from home when the Fi light came on again, this time accompanied by an insistent “miss” at about 4000 RPM. Back home again and into the shop for some expert diagnosis. And there it stayed for several weeks because the Island Classic intervened and Gary was frantically busy so I told him to look at it when he had the time. Back from PI I contacted him and all was well. As is usually the case, there were 3 problems and they all were masking each other. Firstly, I’d somehow picked up a VERY dirty tankful of fuel, the battery was showing signs of intermittent weakness and the connector to the Fi light was corroded and not always making proper contact. So, a fistful of dollars later and Rhonnda is back to her best, whoohoo.

Except that I can’t ride because it’s been blazingly hot since I got back from the Island and now it’s raining. Poor Rhonnda, she must think I don’t love her anymore. The good news, of course, is that, once ll this is over, I can ride AND I can start to see the wonderment of the Australian bush regenerating itself from the devastation as it always does.

And I haven’t been able to ride Goldie either because she’s in dock having her carbies overhauled. Never rains but it pours as they say.

Now, to another topic. Last week it was announced that Norton Motorcycles had gone into administration, weighed down by a mountainous debt that they are unable to pay. Anyone who knows anything about this sorry saga will not have been surprised. The whole Norton story has been a lesson for the feckless and gullible. The owner of the company has the business ethics of a gutter rat and his treatment of his “customers” has set a new low point for customer relations. I sincerely doubt that any of the poor people who have been a victim of this fraud will be compensated and even those who were actually able to BUY one of the bikes is now going to be faced with zero back-up and on-going support. Caveat emptor is the term that is best used here.