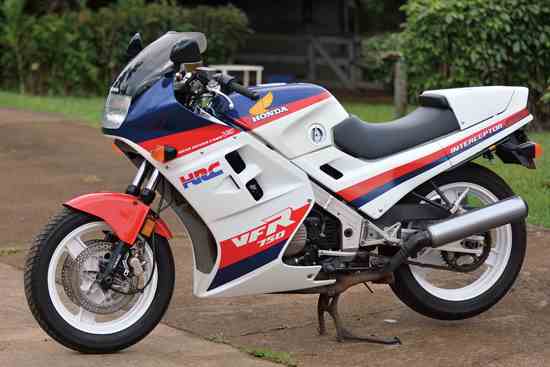 Though it hasn’t been officially announced by Honda, it seems that the venerable VFR Honda range has come to an end. First appearing in 1986 (above), VFR fanatics have been contacting their local dealers about the news to be told that no more VFR’s are being made with the dealers moving on their existing stock (if they have any) with no replacement model being foreshadowed.

The 8th Gen model, debuted in 2014, will therefore be the last VFR unless Honda decide to introduce a new model with the V4 engine. Given that the V4 was always excessively expensive to build when compared to the simpler I4 that is the norm from the Japanese manufacturers these days, this seems unlikely. Added to this is the “word” that Honda was not going to be able to make the existing engine meet the increasingly stringent Euro 5 emissions requirements and it seems we are, indeed, about to see the end of the line.

There is still the “phantom” RVF1000 model that has been “teased” across the internet for years, but, even if Honda can make it Euro 5 compliant, AND they decide to produce it at ALL, the price will be well and truly out of the reach of the average enthusiast. Given its GP heritage and raft of unobtainium parts you can expect it to cost around what the Deemosedici Ducati did a few years ago.

As a long-time VFR owner (I bought my first in 2002 and have owned 7 of them altogether), this news makes me very sad indeed. It makes me very GLAD, however, that I bought Rhonnda, an immaculate, VERY low mileage model when I did because even the most ardent of the VTEC brigade will admit that the 5th Gen was the best of the VFR’s. I am even MORE glad that mine is the 1998 model, the best of the 5th Gens as it is the only one that does not have any anti-pollution gear attached, so I can go on fouling the atmosphere for years to come!

As someone wisely put it, the end of the line does not necessarily mean that the price of VFR’s will go up as a consequence. Honda built hundreds of thousands of them and the bike lasts forever with reasonable care so we are not likely to see the supply dry up any time soon either.

Having said all that, however, the news DOES raise the question of what is Honda going to do to replace the VFR? Many enthusiasts believe that Honda won’t replace it a all. After all, their last abortive attempt to move the purists on to new technology, the ill-fated VFR1200 was a dismal failure in the market place and was discontinued several years ago with the last remaining stock being moved on at fire sale prices. It WAS a good bike but it wasn’t a VFR and it WASN’T what VFR enthusiasts wanted.

Unfortunately, Honda’s history of discontinuing bikes and not replacing them with a newer model is not good. In recent memory they have discontinued the VTR1000, the Blackbird, The ST1300, the CB1300 and 1000 to name just a few. I am not holding out any hope that we will ever see another VFR. The Cross Tourer (the quasi adventure bike based on the VFR1200) is already finished and Honda dealers are clearing stock of the Cross Runner, the VFR800-based adventure bike. I can’t see either of them being replaced either for reasons that I have already detailed above.

One of my ozvfr friends put it pretty bluntly last night “Honda has lost the plot”. I tend to agree.