Well, not quite home from the sea, but I was pretty CLOSE to the sea so I think it’s OK. Of the 5 days on the Island, yesterday was by far the hottest and the most demanding. Ambient temperature was 37 degrees in the afternoon and the track temperature (and the temperature of the concrete in the pits) was 53 degrees, CELSIUS. Thankfully a sea breeze came in in the afternoon from Bass Straight but the heat and burden of the day had already sapped what little energy was left by then.

In spite of conditions, the racing was still superb with Australia’s “Davo” Johnson leading the Australian team to its first pointscore win in 4 years, beating Team GB by 31 points in the end. All the Aussie riders rode out of their skins all weekend, riding bikes that were technically inferior to the gems in the Team GB garage but doing it for pride and Australia. It was so very close in the end with Davo not only winning the overall points individually but also the prestigious Phil Irving trophy.

As already noted there were so many highlights (and a fair share of lowlights) from the weekend that I’m going to do a separate article tomorrow with my overall impressions.

As soon as the last race was over and formalities completed, we hit the road for home. We were just going to slab it up the Hume but, during the weekend, I noted that a guy in Bega was offering, free to a good home no less, a complete set of fibreglass, in red, for a 2001 VFR. I got my bid in first so it was mine. Winner! But it did mean that we had to go home the coast road again as I had arranged with Wayne to pick the bits up from his place in Wolumla, south of Bega. As we wouldn’t be passing through there until the wee hours of the morning, he offered to leave the stuff at his front gate along a little country road and we could pick them up when we were passing through.

Needless to say, finding his house out in the sticks, at 2 o’clock in the morning, even with the aid of a GPS, was challenging, but we got it done and filled up the back seat with VFR spares. Very cool. 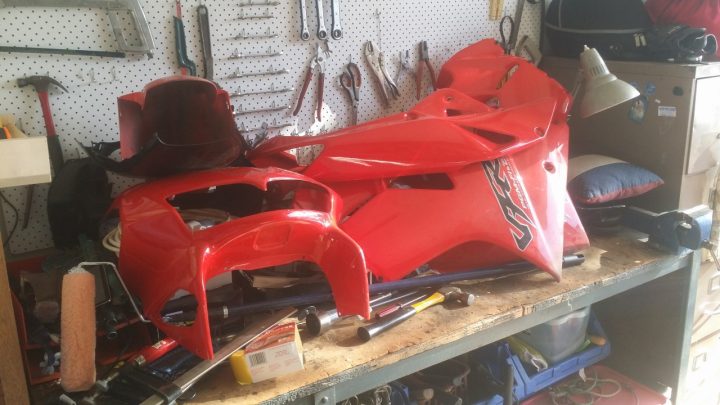 We had to wait until nearly 10 o’clock at night to find a place that sold food. None of the little Victorian towns have cafes that stay open at night, having surrendered, it seems, to Macdonalds and KFC. Nevertheless, the pizza from the pizza shop at Lakes Entrance was excellent and served as tea and breakfast; we nobbled the last of it at Moruya this morning after sunrise.

We took a long while to get home, having stopped often for rests, walking around and an hour’s kip south of Eden. I’ve had a few hours sleep today and am starting to feel a bit better. I’ll be right tomorrow.

As a spectacle, the Island Classic is without peer and I’m already planning next year’s trek. If you haven’t been, you really do owe it to yourself to do so.