Overnight the news has come in news of the death of motorcycle drag racing legend, Russ Collins. When I first started riding I devoured every motorcycle magazine that I could, and that meant the American ones particularly since they were glossy, filled with interesting articles and somehow a cut above the local ones at the time. I suppose that a contributory factor might also have been that I already had a long history of buying American mags during my car racing phase. Mags like Road and Track and Car and Driver had been my staple. Thanks mainly to my uncle, I had also had a steady diet of hot rod magazines so I was well aware of drag racing and salt racing.

So, transferring that passion to motorcycle racing meant that I also immersed myself in motorcycle drag racing. And what a time it was. Top Fuel drag racing was dominated by the three heroes of the day who received nearly as much coverage as their 4 wheel equivalents, names like Jack Chrisman, Keith Black, Don Prudhomme and, of course, the legendary Don Garlits.

Enthusiasts of today look back on the 1970’s as the golden era of Top Fuel, and justly so. Ranged against each other we had T C Christensen in his famous “Hogslayer”a twin-engined Norton powered bike.. 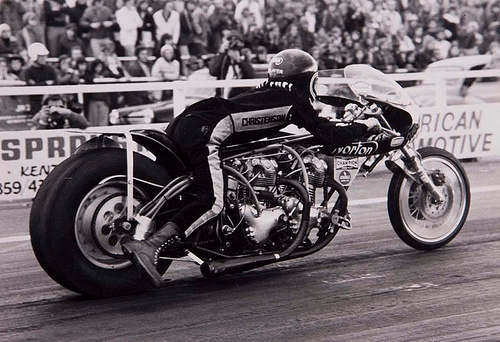 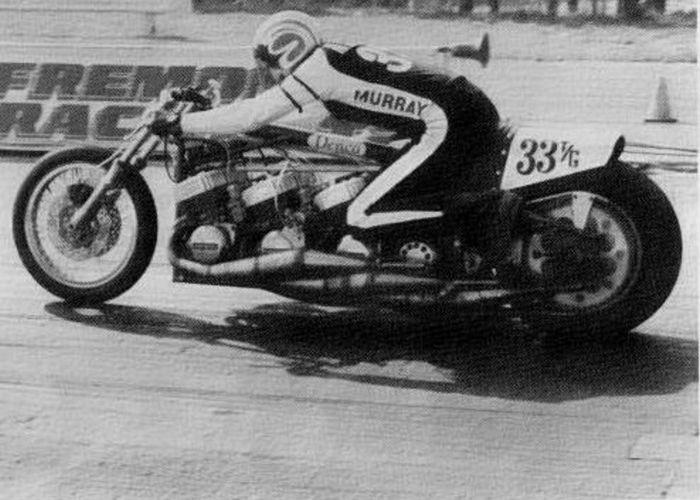 …and Russ Collins on the Honda-engined triple. 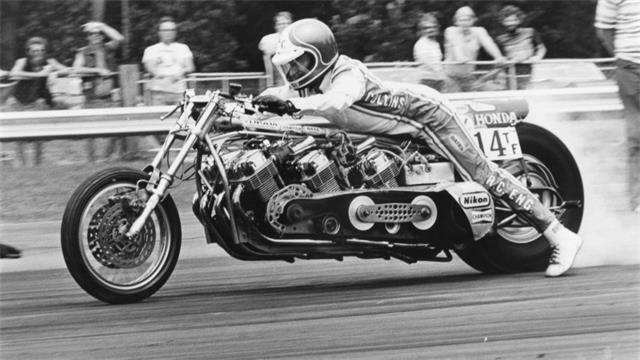 These three slugged it out on drag strips across the country, forging a legend that continues down to this day.

Of the three, the Collins bike was the one that grabbed the most attention. Collins himself dressed in colourful leathers and conscious of good PR, his impact was nearly as dramatic as was the impact of the bike he rode. Nicknamed the Atchison, Topeka & Santa Fe after the famous train, it was a technological tour de force and, until it was destroyed in an horrific accident that nearly took Collins’s life as well, it was the show pony to end all show ponies. Once all three bikes appeared on the front cover of Cycle Guide magazine along with a feature article on them. They were great times.

And now the great innovator and showman has passed on, aged 74. I will leave it to revered Cycle News columnist, Larry Lawrence, to summarise the career and impact of the man in his article published last night.

As a matter of interest, here’s Russ with the remains of the AT&SF sometime after the dust had settled. 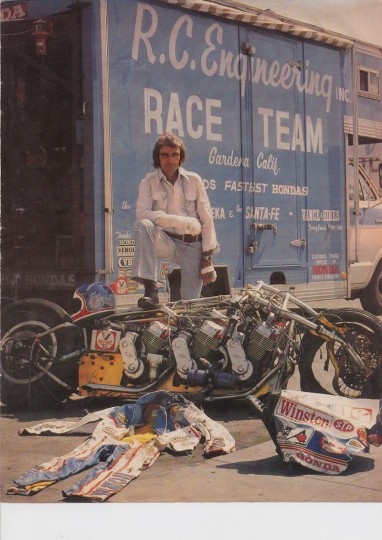 Sadly, Top Fuel seems to be no more but I will always remember, with great affection, the epic era of the three great gladiators, Collins, Murray and Christensen.