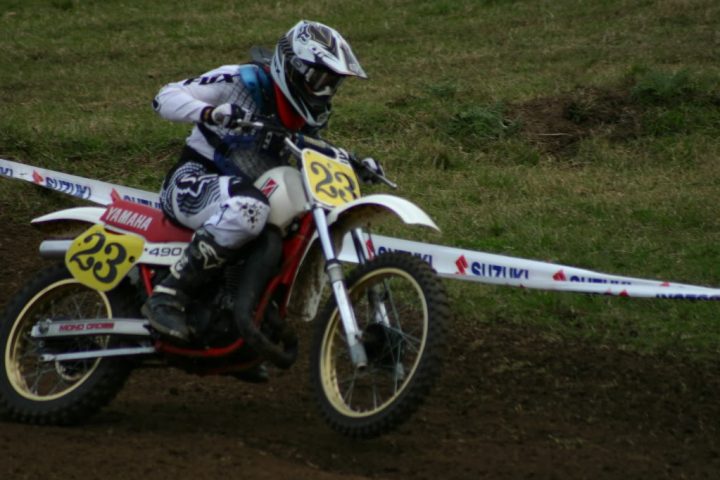 In a blog that devotes itself primarily to road racing and road riding it may seem strange to some that I would headline my entry today with a picture of an old-skool motocross bike, but, bear with me while I explain.

Today I pay tribute to the man who I regard as being the most supremely talented motorsports exponent that this country has seen in the modern era. A sweeping statement? Yes, maybe, but I believe that I can back it up with more than enough facts.

Stephen Gall burst onto the the motocross scene in the early 1970’s. Motorcycling was still struggling to shake off the “Wild One” image from the 1960’s and was still seen by many in the community as being slightly less than desirable. But a smart promoter by the name of Vince Tesoriro, started a series called “Mister Motocross” and backed it with huge amounts of his own and sponsor’s money, promoted it widely in the media and, suddenly, everyone was talking motorcross. From the early Mr MX days emerged a whole series of stars that quickly became household names, not just amongst the motorcycling fraternity but in the wider one as well. Supreme among the stars that emerged were two young and extremely promotable athletes. Representing Suzuki, from the struggling steel town of Wollongong, the “rough nut” kid, Anthony Gunter. And, representing Yamaha, Sydney and the suave set, his nemesis, Stephen Gall.

The Gall vs Gunter battles became legendary and the two riders slugged it out in successive rounds of the Mr MX series as well as the more traditional state and Australian MX titles. And, when the dust had finally settled, literally as well as figuratively, Gall was the decisive victor.

In between all this dirty stuff, Gall was doing the promotional tour. For the first time, motocross was taking a leaf out of road racing’s book and promoting its stars as professional athletes who had a life and a purpose outside of the grunge of the pits. Gall, sponsored by Yamaha, toured schools, did public appearances, was interviewed on TV and radio and always the message was the same, “get off the couch, get out in the open air, get fit, ride a motorcycle, be professional in what you do,” and so on. It was quite a media blitz and the public lapped it up. Interest in motocross and motorcycling in general soared; crowds at the track increased; kids pestered their parents for a mini-bike and everyone wanted to be Mr Motocross. Gall achieved cult following and his public persona became common knowledge. In short, he was just what motorcycling needed.

But, and this is most important, Gall did what he did with a modesty, charm and style that endeared him to everyone with whom he came in contact. Long after a race was over and the other riders had hit the showers to wash off the grime of the day, Gall would still be in the pits, surrounded by his fans, talking, encouraging, PREACHING, motocross and motorcycling.

In between his dirt track commitments, Gall found time to go road racing. A contracted rider to Yamaha Australia, he fulfilled his commitments, flying the flag for them in several Castrol Six Hour races where he rode with stunning style, precision and reliability scoring a 5th place outright in 1980.

He was one of the first riders to equate physical and mental fitness with the discipline of motorcycling and it became his mantra as he eased out of active competition. He set up the University of Motocross, running weekend and weekday camps for young prospective and competing riders. Tuition was given in all aspects of the sport with particular attention being given to nutrition, fitness and mental attitude. And, from those camps have emerged several generations of MX stars whose names still shine in the world of motocross. To say nothing of the thousands of young people whose lives have been enriched and improved thought the life lessons learned by attendance at the camps.

But competition still ignited the flame for Gall and so he dived off into a completely different arena, speedway. Working together with his brother, Dean, out of their workshop in suburban Kirawee, Gall embarked on a new career, driving speedcars, or midgets, on the speedway tracks of Australia. Did he do any good? Well, yes, he did, actually, he won an Australian Speedcar Championship!

The speedcars eventually became a bit “tame” for Stephen so he graduated to the big game, sprintcars. Here it was not quite so easy. Sprintcar racing was booming and so were the budgets required to stay at the pointy end and, after a few seasons where some wins came but no titles, Stephen recognised that it was time to quit.

In between all other these endeavours, Stephen went off-road racing, competed in long distance motorcycle rallies and got into mountain biking. Did he do well? Of course he did.

Time to summarise. Here is a precis of the great man’s career (courtesy of the Formula Xtreme web site who provided the stats here)

On a personal note, I am delighted to say that I have known Stephen since way back then and that, even though our paths rarely cross these days, when they do, he is always as friendly and generous with his time as he always was. Now in his 50’s he is still super fit (he could put most young people to shame, in fact) and super dedicated to whatever it is that he is doing. To say that he is a driven man would be the understatement of the year, but the drive is not tainted with self-absorption and arrogance that often goes along with such a personality. I have never spoken to anyone who has anything but the highest praise for him.

I am often asked who I think is the best motorcyclist that Australia has ever produced. It is always a hard question because it is hedged about with so many variable factors, but, in the end, I always come back to Stephen Gall. My standard reply is that he is, without peer, the most versatile exponent of motorsport that this country has ever produced. And I usually add the disclaimer, “Put him in a billy cart and he’d win.”

This one’s for you, Stephen. Mr Motocross, Mr Motorcycling, Mr Versatile. Thanks for the memories.