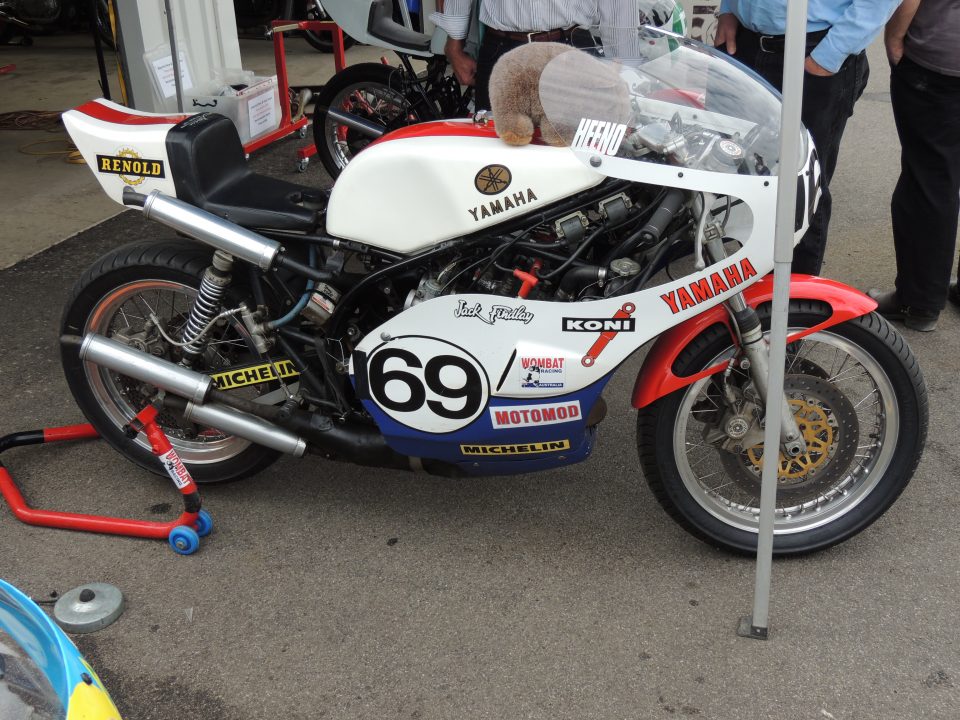 Wow, what a week! I’ve just got back from a trip to the 20th Annual Island Classic at Phillip Island (nice of them to name it after me!) and it surpassed by a considerable margin the enjoyment that the 2012 event generated and I wouldn’t have thought that was possible. So many highlights, where do I start? I guess chronologically, though I am sure that I will miss relating some parts of the story.

Before the event I was able to secure media accreditation again, working for Jim Race and Jules Cisek and their Motopod internet radio broadcast programme. If you haven’t checked out Motopod, you should, it’s a fund of worthwhile information every week.

Ticket and passes sorted, I then turned my attention to transportation for me and for the Shadowfax as I was hoping to display my bike at Australia’s biggest post classic race meeting. It all seemed good with Zoltan Petri from Newcastle offering me a place in his car and a place on the trailer for the bike. However, it all went a little pear-shaped when, just a week before, Zoltan found out that the three bike trailer he was borrowing was, in fact, only a two-bike trailer so the frantic search began for a replacement lift for the bike. Thankfully, Phil Harlum from Kawasaki Sports Riders Association was able to accommodate the Shadowfax on his trailer so both the bases were covered, albeit after a bit of panic.

So, on Wednesday morning I headed up to the highlands to meet Zoltan who was travelling through from his place. Together we solved all the problems of the world in general and racing in particular as we covered the thousand or so k’s between us and PI. Arriving late on Wednesday evening, I liaised with Roger Gunn from the Sunset Racing Team and settled in to the house in which the team was staying for the weekend.

Thursday was private practice day and most teams took advantage of the day to acclimatise and to suss out the newly-paved PI layout. Everyone agreed that the contractors had done a top-notch job and that lap records were going to tumble. The only slight downside was that it was expected tyre wear could be an issue as improved grip leads to increased wear.

I spent most of my time with the USA Team as it gave me the chance to renew the acquaintance of Ed Haazer and Jimi Mac who had raced here last year and also Deano Swims from Tennessee with whom I had been liaising about details and arrangements. Suffice it to say that everything I had expected from the American visitors came true and a whole lot more besides. What a hilarious bunch of pirates they were. Mostly riding old TZ750’s and other machinery that was patently not going to be competitive with the 200+bhp monsters of Giles and Martin, they came from a racing background in the States where Historic Racing means racing historic, unimproved bikes. Most were aware that they were not going to be at the pointy end but the experience of how professionally and seriously post classic racing is done here compared to the USA was a huge eye-opener for them. Most also agreed that historic racing in the States is in grave need of a huge shake-up and I believe that this experience might be just the incentive for that to take place.

I mentioned what characters the American riders were, what a understatement this is. Urbane well-off amateurs like Dave Crussell who owns about 40 classic bikes (and not just ANY classic bikes but actual race bikes of riders like Gary Nixon, Yvon du Hamel, etc) mixed it with cowboys like Ottis Lance from Texas whose 1980 model GS1000 hadn’t even been started for 27 years! Throw in a rider who mixes road racing with record-breaking at Bonneville Salt Flats, a sidecar team who sport purple mohawk hairdos on their helmets and a seriously fast young rider with a 3rd place in class at last year’s Pikes Peak hillclimb and you have the recipe for chaos, fun and a weekend never to be forgotten.

And that’s just the USA team. A total of 363 riders were entered for the meeting on more than 400 bikes. It was HUGE. Just getting around and seeing it all was a challenge.

I spent Thursday photographing as many bikes as I could before the weekend got too busy and organising a raft-load of interviews for MotoPod. I took over 300 photos around the pits and you can see them in the album below. You don’t have to be a Facebook member to view my album.

Friday got serious as Practice Day usually is. For most it was a matter of adjustment and fine tuning, for others it got a lot more serious than that. American visitor, John Concklin, was thrown from his TZ750 in T12  and suffered a concussion and minor breaks in his hands that saw him hospitalised for three days. Thankfully he is OK. Ottis Lance’s bike started and ran (sort of), but his new Kosman wheels didn’t fit despite him having provided the factory with all the appropriate measurements. Enter local engineer, Scott Owen who spent the rest of the weekend assisting Ottis, fabricating new brake caliper mounts and wheel spacers and diagnosing and fixing a myriad of other issues that are inevitable with a bike that has been stored for nearly 30 years. This man is a dead-set legend, I can’t even begin to tell you how much I admire his dedication and work ethic, this despite being severely inconvenienced by injuries from a serious road accident. If you’re in Melbourne and you want top-grade fabrication work done, Scott is your man.

Qualifying on Saturday morning saw lap times tumble, Suzuki ace, Shaun Giles, finishing with a 1:37 lap that would have put him in the middle of the grid at WSBK last year! Racing was going to be awesome, and so it was. Established stars shone as they always do and new stars emerged as well. And all of this in a laid-back friendly atmosphere that would be the envy of any promoter.

In Period 5, the most fiercely-contested class, there were 105 entries alone so the field had to be split into a Premier Class and a Support Class, based on qualifying times.

I didn’t see a lot of the racing, I have to say, though I did watch the International Challenge events, especially to see how my American buddies went, and they did very well considering their less-than-brilliant machinery. Ottis Lance, after fixing the Suzuki, actually ended up being the top American home, an astonishing performance. Watch out if he comes back next year with a competitive bike, that’s all I’m saying.

In the pits, the atmosphere was wonderful. I caught up with the great Kiwi rider, John Woodley, who I haven’t seen for over 30 years. Robbie Phillis was, as usual, larger than life and twice as noisy, and it was great to see some mates who I haven’t seen for many, many years, especially Murray Ogilvie who was our first A” Grade rider when we started Canberra Road Racing Club in 1977.

The Shadowfax attracted great attention, as expected and it was well worth the hassle of taking it all the way down there.

The guest of honour for the weekend was 15 times World Champion, Giacomo Agostini and it was a real thrill to sit in on and record an interview with him. 70 years old now, he was charming and gracious as he always has been. Listening to him ride his 500cc MV Agusta was a real thrill, too. The last time I heard that sound was at Laverton in 1976!

We scarpered as far as Melbourne on Sunday night then did the rest of the trip home on Monday, arriving back in the middle of torrential rain, what a great way to finish a trip – not.

Would I do it again? Hell, yes, and I hope I can. There are about 100 stories from the weekend that I haven’t told you but time and space don’t permit. I will recount some later so watch this space. Thanks to Zoltan and Phil for the transport, Roger for the accommodation and hospitality and anyone else who helped make my IC 2013 experience memorable.

If you’ve never been to the Island Classic, put it in your diary for 2014 and go. You won’t be sorry, it really is a treasure island.