You are here: Home / February 2012 / Slow progress is better than no progress 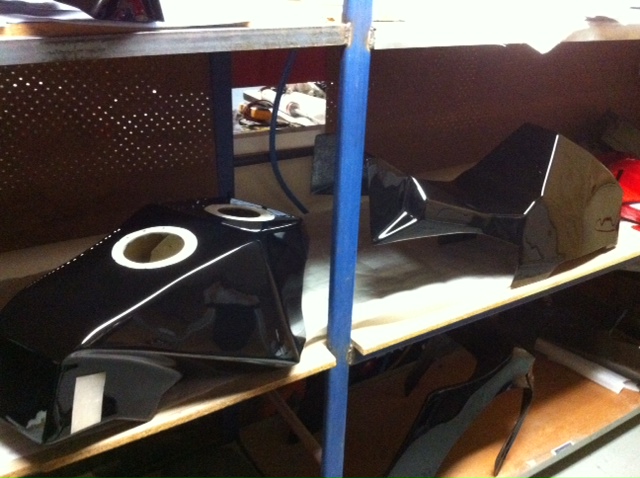 Yep, that’s the Shadowfax seat and tank, mudguard and fairing. Now painted in gleaming black by the excellent Paul Campbell of Redback Racepaint in Canberra. Once that is fitted to the chassis, later this week, the completed rolling chassis will be off to Alan Beavan’s place to have the green stripes applied. Then it’s engine in and commissioning all the rest of the running gear. As of tomorrow, the 1st March, there will be 22 days till practice day at the Sheene. I’d like to have it ready by then if possible. Best case scenario as a runner, worst case as a display.

I’ve been really pleased with the response to my photo album of put shots from PI, and very gratified too. Funny that pictures taken with a little compact camera could come out that well.

In MotoGp, testing has been taking place at Sepang for the last 3 days with Casey Stoner consistently topping the charts and Valentino Rossi still languishing more than a second behind the Australian’s best time. Sooner or later the new father is going to get some credit for what he does on the bike.