The pace towards the 2012 season in world motorcycle racing is accelerating, and, along with it, the news items about it continue to multiply. So, let’s see if i can get you reasonably up-to-date. To begin with I published what is an almost-complete grid sheet for MotoGp, Moto2 and Moto3. If you haven’t caught up with that, that would be a good place to start.

1. Ducati MotoGp are presently at the Jerez circuit in Spain, conducting a super-secret test of the new GP12. While Filippo Preziosi has been very cagey on the actual details, he has said that the bike WILL have a perimeter aluminium frame and a carbon fibre swingarm. What he didn’t say, and what is being hinted at by many O/S journalists, is that the actual configuration of the engine has been changed, from a “L” motor (90 degrees between the v) to a proper “v” motor with 75 degrees between the v (a la Aprilia RSV4). Many people have said that the 90 degree configuration has been one of the major shortcomings of the GP Ducati’s design, making the engine, and thus the wheelbase, too long, not allowing enough weight to be placed over the front axle. It seems very simplistic to think that that could be all that the problem has been, but, lack of front-end feel is the universal complaint from all riders who have ridden the bike, so, it just could be that therein lies the root cause of their problems. Ducati’s slavish adherence to the “L” configuration stems far more from tradition than it does to engineering good practice, so, perhaps their abandonment of the c/f “mini frame” AND the “L” motor may see a resurgent Ducati in 2012. Let’s hope so. If you look at the success that Aprilia has had with the 75 degree engine then, maybe Ducati, late to the party, might still get a seat at the head of the table.

Franco Battaini, Carlos Checa and Australia’s Troy Bayliss are all apparently shaking down the new bike this week with Vittoriano Guareschi and the two GP riders yet to sample it. Somebody needs to step up to the plate and give Casey Stoner some better competition than that which he had last season, could 2012 be the year for a Ducati resurrection? Oh, and speaking of Ducati, the factory has now come out and said that it WASN’T Nicky Hayden on the back of the bike Rossi rode through that snow at Vrooom last week. Ducati’s medical staff have said that they never would have allowed him to do that, given the condition of his shoulder.

Australia’s Andrew Pitt, 2 times World Supersport champion, one of the most versatile riders of recent years, development rider extraordinaire and all-round good guy, has announced his retirement from racing this week, aged 35. Pitt, a peerless ambassador for the sport, suffered irreparable nerve damage in his arm in a BSB accident last year and has been forced to hang up the helmet. I wish him well in retirement, one of the all-time good guys, he will be missed. 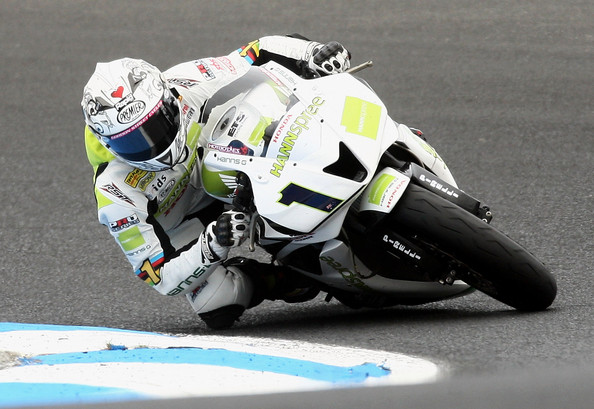 Remember the other day I said that Jules Cluzel was leaving Moto2 for a ride in WSS? Well, it isn’t going to happen. Despite announcing the popular Frenchman as their rider for 2012, the WTR 10 Ten team has now announced that they are not going ahead with the deal. Apparently this isn’t the first time that this team has pulled a stunt like this. Sure hangs poor Jules out to dry, though. Despite his propensity for crashing, he is fast and a race winner. Let’s hope some other team picks him up.

Wayne Gardner and his two boys, Remy and Luca, jetted out to Spain this week to take up residence there so that the boys can pursue their racing careers in the ultra-competitive Spanish racing atmosphere. I wish them well. All indications so far point to both the boys having inherited their father’s talent and determination, so remember their names.

Marc Marquez, still troubled by blurred vision after his accident late last year, has opted for surgery (I think he probably should have done that straight away) and is apparently home already recuperating. Let’s hope that it is successful as Grand Prix racing needs him badly.

In WSBK, the Ten Kate Team is testing at Phillip Island behind closed doors this week. The media releases contain the usual platitudes but don’t really tell you anything.