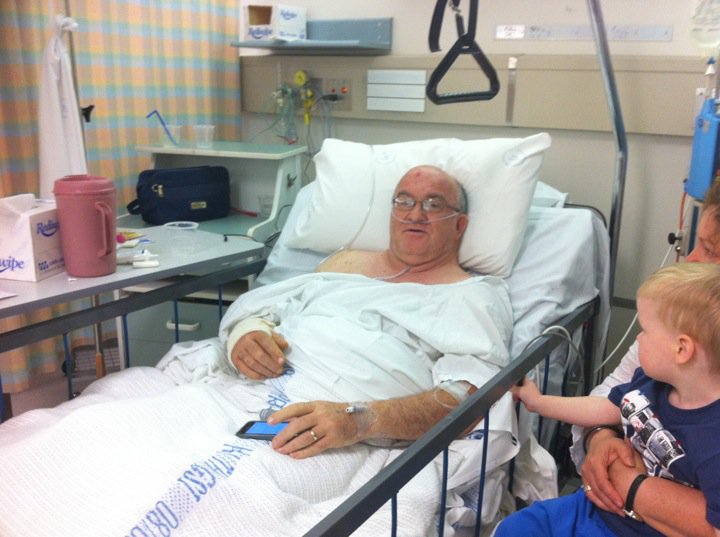 It was a year ago today.  I hadn’t had a call for school, I had finished doing my chores, so I set out for a pie and a cup of coffee at the Famous Robertson Pie Shop. I didn’t get there. A quarter of the way up Macquarie Pass, a cement semi-trailer, partly on my side of the road, clipped my bike and I woke up, lying on the road with multiple fractures. What followed was a bizarre whirl of sounds, sights and previously unexperienced sensations.

The fact that I survived the accident at all is more down to luck than management. It could so easily have gone the other way. But one thing that I am certain about is that my passionate belief in the “All The Gear – All The Time” mantra was a huge contributing factor in saving my life and limiting my injuries. Despite the ferocity of the incident, I suffered no internal injuries, no abrasion injuries, no head, neck or spinal injuries and I put that down squarely as a consequence of having been wearing top quality gear and lots of it. Doctors and emergency room staff at Kogarah hospital were amazed that I was even alive, let alone conscious and giving cheek.

In past posts I have praised the staff of our hospitals for their dedication, passion and compassion. It’s time to repeat that. Despite horror stories that I have often read where motorcyclists were treated poorly by medical professionals purely because they WERE motorcyclists, I can say that I have nothing but the highest praise for the people who treated and cared for me.

The last year has been a hard year. Pain, loss of independence, lack of mobility and the inability to work and support the family have all contributed towards making this year seem much longer than a year. People have said to me lately, “Gee, it doesn’t seem like a year.” Well, I can tell you that it seems like much MORE than a year.

Attending Max Pinch’s funeral in Wollongong was one of the hardest things that I have had to do this year. I looked up to and admired that man so much and to have him taken away in an accident eerily similar to mine was a double blow.

BUT, there have been many positives in the year, the most outstanding being the love and care of my wonderful wife. When she said, “I do.” to the “in sickness and in health” question, she really meant it. I am certain that I would not be writing this piece today, in the frame of mind that I am in, if it weren’t for her unfailing cheerfulness and care in the face of not only my injuries but the sudden loss of both her mother and her younger brother within the space of 3 months (her mother just a month after my accident). Can I nominate her for a sainthood? I owe her more than I can ever repay. To my wonderful children, also a thank you which is heartfelt but totally inadequate.

AND I owe a great debt also to my motorcycling family. I have said before, on many occasions, that NOBODY, but NOBODY, looks after their mates like motorcyclists do, and I am proof of that. The outpouring of support and encouragement that I have received from the motorcycling fraternity (often people I have never even met) has been staggering and I feel deeply humbled by their concern and their expressions of support. In more ways than I can say, my family and my motorcycling family have sustained me and hastened my recovery.

The Internet can be a real waste of time, we all know that. But, to me, it has been a life saver. Especially in the early months when I was unable to move much and get around, being able to connect to the outside world and stay focussed on the bigger picture was amazingly therapeutic.  Facebook and the various motorcycle online forums to which I belong saved my sanity by helping me to concentrate on something other than my own misfortunes and helping me to see that many others were suffering and had suffered as I was, many in far worse circumstances than my own. I have always said that you should patiently bear your lot in life, knowing that there are always others who are far worse off than you are – this experience has been a practical way of me carrying that out.

Once I became more mobile, my wife’s inspired suggestion that I should focus my energy on restoring the Shadowfax, was just what the doctor ordered. One of her favourite sayings is, “Common sense if fairly uncommon.” and I’m a classic example of that. She, on the other hand, has it in abundant quantities, and she hit the jackpot with this idea. Not only has it given me something to do during the day, got me WORKING on something, but it has rekindled my passion for motorcycling. In the months after the accident I felt totally disconnected from motorcycling. I couldn’t think about riding a  motorcycle and I cringed every time I saw a motorcyclist ride by. Well-meaning friends brought me motorcycle magazines and books that remained unread. Connecting with the motorcycling community through the restoration project has been the very best therapy that I could have had and that’s not just my opinion, my psychologist who I have been seeing agrees!

Now, thoroughly bitten by the bike restoration bug, I am already looking around for my next project. My passion for 4th Gen VFR750’s (1994-97) remains, I’d love to do one of those. If you know of one that needs some TLC and it’s going cheap, let me know, please.

A year is a long time, I can tell you that from a different perspective. But, despite it all, it has been a good year. I have been forced to reassess my priorities in many areas. I have gained a new appreciation on the fragility and preciousness of life. I have learned to appreciate and love my wife and family more, and I have found out just how deep real friendship is. For all of these things and so much more I am more grateful than I can ever say.