This weekend the MotoGp circus ping-pongs back to the USA (whose dumb idea was it to programme this calendar? Laguna Seca, Brno, Indianapolis – d’uh) for the second of the two MotoGp events to be run in the USA these days. Despite the fact that the average American doesn’t even know what MotoGp IS, the FIM insists on programming two races there so that the profile of MotoGp can be raised there. It isn’t working. Attendances at Laguna are good, because the track has tradition, atmosphere and California weather. Attendances at Indy are poor to put it mildly as the mid-western fixation with NASCAR and other speedway-type races, even at the Brickyard, seems to be way too deeply ingrained. Indeed, it is still a moot point whether this will be the last MotoGp event held there despite talk of extending contracts, etc. The new circuit in Texas may soon be the home of the 2nd USA-based event, and nobody will really miss the Brickyard.

As you know, the track is basically made up of a quick blast along the main straight, hang a left at T1 and then down onto an infield section that winds around the car park till finally exiting back onto the main straight for the run to the flag. After a lot of criticism, the infield section has been re-paved and Nicky Hayden (who lives not far away, the US press keeps telling us – quite why, I don’t know, it seems completely irrelevant to me) has tested it and said it’s a huge improvement. It will need to be.

Anyway, ahead of the race, courtesy of  Dr Martin Raines from motogp.com, the stats

100 – At the Indianapolis Grand Prix, Aleix Espargaro will be making his 100th GP start. Espargaro made his GP debut at the age of fifteen as a wild-card rider in the 125cc class at the final race of 2004 in Valencia. He became a full time GP rider from 2005, first in the 125cc class and then moving up to the 250cc class half way through 2006. After continuing in the 250cc class for 2007 & 2008 he missed the first half of the 2009 season as he had not secured a GP ride but he returned to compete in two 250cc races before ending the season riding a Ducati in MotoGP. After a full season of MotoGP in 2010 he dropped down to the Moto2 class for this year, taking his first GP podium finish at the Catalan GP earlier in the year.

27 – Kenan Sofuoglu celebrates his 27th birthday on the day before first practice starts for the Indianapolis Grand Prix.

24 – Andrea Iannone’s win at the Czech GP was the first win by an Italian rider since Iannone himself won at the second event of the year at Jerez – 24 races across all classes without an Italian winner. This is the longest gap between GP wins by Italian riders since Luca Cadalora won the 250cc race in Brazil in 1989 which followed 30 races without an Italian win from Pier-Francesco Chili’s victory in the 500cc race at Misano earlier in 1989.

23 years – On race day in Indianapolis it will be exactly 23 years ago that Jorge Martinez won both the 125cc and 80cc race at the 1988 Czech GP at Brno. This is the last occasion that a rider has taken two GP victories on the same day.

22 – Valentino Rossi has scored points in all 22 MotoGP races since returning from injury at the German Grand Prix last year.

19 – This will be the 19th occasion that there has been a motorcycle Grand Prix held in the USA. The first two events in 1964 and 1965 were held at the famous Daytona circuit. 13 GP events have taken place at the Laguna Seca circuit and this is the fourth to be held at the Indianapolis Motor Speedway.

8th – Simone Grotzkyj’s eighth place finish at Brno is the best result in the 125cc class for an Italian rider so far in 2011.

3 – Indianapolis is one of just three current circuits at which Casey Stoner has not had a MotoGP victory; the others are Jerez and Estoril.

3 – At the Czech GP, Sandro Cortese became the third different German rider to win a GP this year, joining Stefan Bradl and Jonas Folger. The last time that Germany had three different GP winners in a single season was 1991, when Helmut Bradl won in the 250cc class and both Ralf Waldmann and Peter Öttl won in the 125cc class.

2nd – Johann Zarco has finished second at the last three 125cc races to three different riders with the time differen­ces separating him from the winner being less than 0.4 seconds in each case. He was 0.167 seconds behind Terol at Mugello, finished with the same time as Faubel at the Sachsenring and was 0.397 seconds behind Cortese at Brno.

….and, to this I add my own, which I am surprised the good doctor missed…

1st – The first time in MotoGp history that a MotoGp bike will be ridden by a woman.

In other racing news, the 3rd round of the Post Classic Association of NSW’s championship will be held at Eastern Creek raceway on Saturday. Yours truly will be calling the action; it should be a great day. Entry is free so get on out and enjoy a day at the track.

In need of a giggle, or maybe a self-esteem boost? How about this for a solution? A Doctor of Motorcycles degree which you can frame and hang on the wall of your workshop, den, lounge room, toilet, whatever. The good people at Amazon.com seem to have thought of everything. 🙂 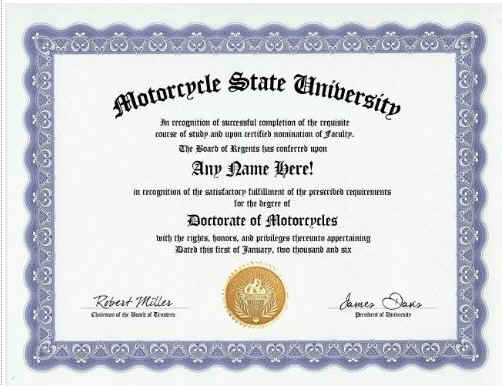 Finally, the excellent David Emmet at motomatters.com has produced a mid-term report on MotoGp engine usage along with predictions for how the teams are travelling for the rest of the season. It makes very interesting reading.

MotoGp engine usage at the half-way point of the season.