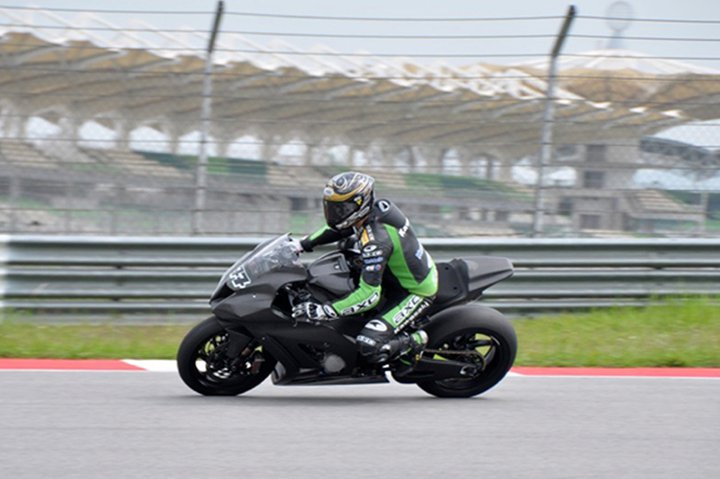 In a sight that will bring joy to all of his patient fans, Chris Vermeulen had his first hit-out on a bike in more than 6 months at Sepang, in Malaysia, yesterday. In a private Kawasaki test for the “works” team and the Pedercini team as well, CV completed a few laps on the new ZX10 and declared himself happy.

“I eased into it today and only did a limited number of laps, over three separate runs,” he said. “I stopped before lunch today and then the rains came later in the afternoon, but we will go out again tomorrow. The new bike feels really good. The last bike I rode around Sepang was a GP machine, so to be impressed with this motorbike already shows it is a very good start.

“All the guys have done a great job in developing it. I was happy to come away with that positive impression, even after a relatively short number of laps so far. Right now I cannot quite bend my knee enough when going round right hand corners, but my knee has improved a lot over the last couple of weeks.

“Everything in the recovery of my knee is going to plan, and in fact I am quite a bit ahead of what the doctors expected. My muscle growth is good, particularly considering I have only been walking for three weeks.”

Even though the test day was pretty much a write-off due to rain, just knowing that Chris has enough strength and flexibility in his knee to be able to ride at all is a big step forward and augurs well for the rest of the season.

And, on the subject of the Ducati MotoGp team and their on-going search for a major sponsor,  it seems that the Italian government has stepped in and that the bikes will run the red/white/green livery of the Italian flag and will be promoting “Made in Italy” as part of their marketing.