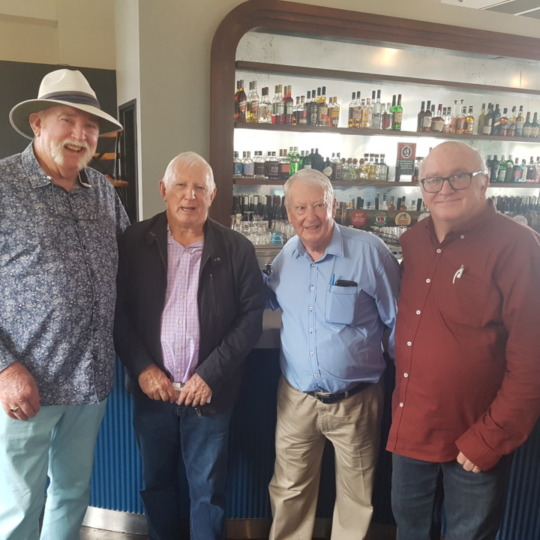 Most of you will know that I have another life (several, actually) apart from motorcycling and that is speedway. I first encountered the cult of the flying topsoil back in the mid 1960s when Channel 7 in Sydney started doing a highlights package of local speedway meetings on Sunday afternoons. On one Sunday they would do an hour highlights of the previous Sunday’s night meeting from the Sydney Showground and, on the next Sunday they would do an hour highlights package from the previous Sunday’s daytime meeting from Westmead Speedway.

The telecasts were, of course, in black and white and their top Rugby League commentator, Rex Mossop, did the commentary. As any mad keen motorsports fan did, I lapped it up even though it wasn’t tar racing. So many of the great names of the day are now revered as legends of the sport.

But my passion was always tar-top racing so my interest in speedway receded into the back ground until I moved to Canberra in 1976. My good mate, the late Allan Harding, invited me to a meeting at Tralee Speedway. I wasn’t that keen but he persisted and I eventually relented. Tralee was still a tar track at the time and the sight of the speedcars doing unbelievable speeds around the tarred 1/4 mile track was something to behold. I was instantly a fan again and started including speedway meetings in my diary.

I eventually gravitated to the commentary box as I started doing in motorcycle road racing and eventually got to call an Australian Sprintcar Championship (1989, Tralee) and numerous other important meetings at a number of eastern seaboard tracks. It all culminated in me becoming the commentator at Wollongong’s Kembla Grange Speedway, a gig that I did for the track’s last three seasons, (1982-4)

I’ve kept my eye in since returning to Wollongong and have been the head of commentary at Nowra Speedway for the last 15 years and am presently also head of commentary at Goulburn Speedway. I’ve kept contact with some of my speedway friends from back then and that’s probably the reason why I was invited to MC an event last Sunday at Sydney’s Fox Studios, a reunion of speedway fans from the days of the Sydney Showground Speedway, just a stone’s throw from the building in which the reunion took place.

It was truly a privilege and an honour to be rubbing shoulders with speedway royalty. 1993 World Speedway Champion (bikes) Sam Ermelenko, was there as well as Australia’s greatest speedway driver, 10 times Australian Sprintcar champion, Gary Rush. I could start a list but I won’t.

As MC my job was to keep the programme flowing and I was delighted when Wayne Meyer, who organised the event, also asked Australia’s premier speedway journalist, Dennis Newlyn, to work the mike with me. We’ve worked together before and I knew what sort of a professional presentation he would be expecting, but we fell naturally back into the flow of commentary just like we’d never been away.

Dennis gave us a brief history of the Showground Speedway and mentioned many of the significant events that happened there, his knowledge of Showground history is encyclopaedic. He also reminded us that many winners from those halcyon days were in attendance including (and I’d forgotten this) Gary Rush who was the last-ever winner of a feature race at the venue (1996).

We had planned on including in the programme some short interviews with some of the luminaries but, about an hour into the programme we reached agreement that the people there were having such a great time talking to each other that they didn’t really want to listen to US talking so the interview idea was scrapped.

Just as well, too, because, at the end of four hours, I was packing up to go as my leg was telling me I’d stood up for well and truly long enough. Most of the attendees were still going strong.

This photo is one to go to the pool room.  (l-r) Stuart Telfer with whom I often shared the commentary box at PCR in the early 80s, Gary Rush, Dennis Newlyn and me. Here is another one. 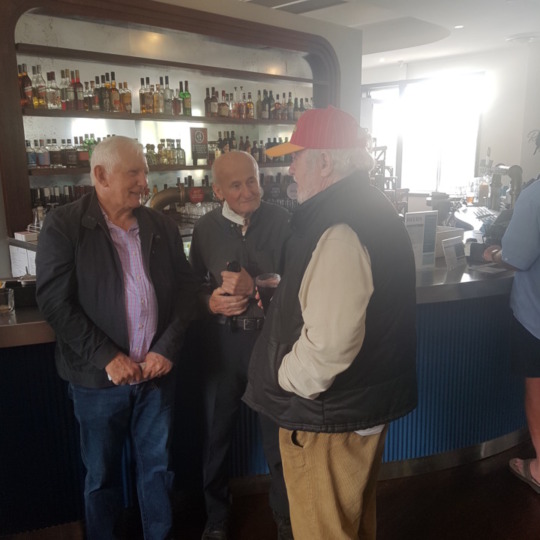 Outside the venue Wayne had organised a display of speedway machinery and what a show it was. For me, the highlight was this one, the gorgeous Mackay Offenhauser in the #75 colours of the late Jeff Freeman who lost his life in a race accident at Westmead Speedway on Mothers Day in 1965. 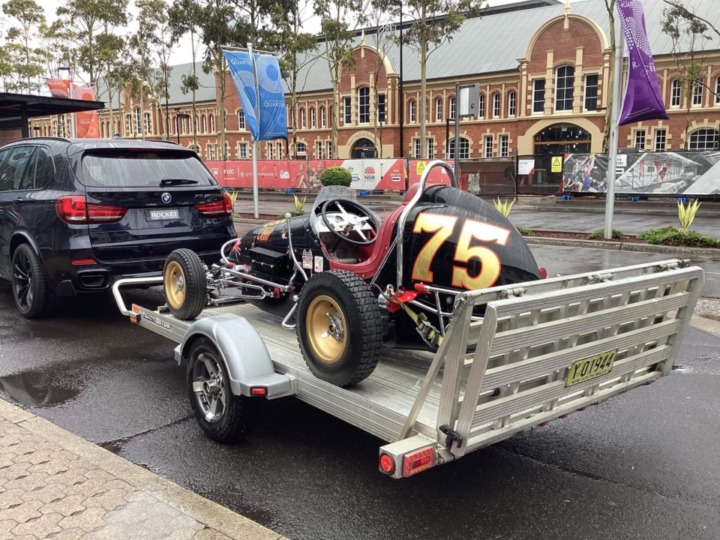 It was a great day and I was delighted to have been part of it. A big thank you to Wayne Meyer.