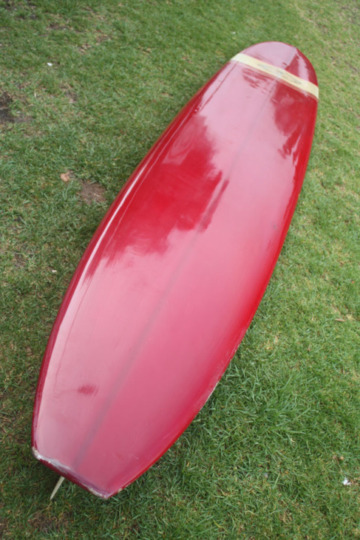 Wollongong has always been a surfing town, probably longer than it has been an industrial town. And, as well as being a surfing town, its proximity to the coast and the highway that leads south to numerous surfing destinations means that cars with surfboards on the roof are a common sight.

Now I have never been a surfer, never even tried it but I have had something to do with it in an oblique sort of way.

In 1962 we were living in Newcastle and I was going to Booragul High School on Lake Macquarie. Some time around there my uncle, mum’s youngest brother, enrolled at Newcastle University to do his Bachelor of Science degree studies. Rob was a bit of an entrepreneur and always seemed to have plenty of spare cash lying around (he was driving an MGA at the time as I recall) and I well remember going into Merewether, a Newcastle beachside suburb, and visiting Rob in his digs, and old-skool holiday house right on the beach. I guess it’s been bulldozed now and a block of apartments has taken its place.

It was Summer time and mum and dad weren’t there so I am guessing that they had other things to do and Rob had “volunteered” to look after us for a few hours. The place was messy and disorganised with all sorts of people coming and going all day. The place was littered with surfing magazines and I remember reading a few of them and barely understanding what they were about, sprinkled, as they were, with surfing slang and in-words.

I do remember well that it was in one of those magazines that I read an article by a guy called Bruce Brown in which he talked about a surfing movie that he was planning to make. It was only a lifetime afterwards that I realised that he had been talking about the iconic “Endless Summer” documentary and that Brown would go on to make the greatest motorcycle movie of all time, “On Any Sunday”

Like I said, I never tried surfing but the lifestyle certainly appealed. Numerous bikini-clad beauties passed through the house (we had started to become regular visitors there) and a local surfing legend, a huge guy whose nickname I have since forgotten was almost part of the furniture.

But there was much more than study taking place there (probably MUCH more, actually, but I was too naïve to know that). You see, the guy who owned the lease was a local surfer called Sam Egan and Sam was starting to make a name for himself as a surfboard maker as well as a surfer. Boards were being constructed in the tiny single-car garage that adjoined the house and the whole place floated on the aroma of fibreglass and the various solvents and materials that went into making boards.

It didn’t take long before the demand for Sam’s boards meant that production had to be increased and a better space had to be found. The next premises WAS a factory, somewhere close by, as I recall though I’m blowed if I could tell you where.

Sam owned a German Shepherd pup who, strangely enough, was christened “Murphy” and Murphy loved hanging around the “factory” and making a nuisance of himself. He was an affectionate dog and loved rubbing himself up against you whenever you were close by. This was all very good but a hairy dog in the close proximity of fibreglass and other solvents meant that it didn’t take very long before Murphy became a solid dog. The glass would dry and harden on his fur and it soon became a regular thing that Murphy had to have a trip to the vet to have his fur clipped close to get rid of his fibreglass coat.

Rob finished his degree and moved back to Wollongong and set up his own business. The business acumen that he had developed as a partner with Sam in the surfboard business was to stand him in good stead as he grew older.

The point of this little missive that has nothing whatsoever to do with motorcycling? Well, Sam Egan went on to become a world famous surfboard maker and his boards were and still are in high demand when they come onto the market. Sam has since retired and ill-health has curtailed his surfing activities but I will always remember with a great deal of satisfaction seeing his world-wide industry at its very earliest stage.

And, as the wheel often turns the full circle, one of Helena’s best friends here in Wollongong is married to a surfer who makes fins and accessories for surfboards in his garage and who, I am sure, would recognise the name of the great Sam Egan.

I hope you weren’t board reading my story today.