You are here: Home / News and Updates / From the treasure trove.. 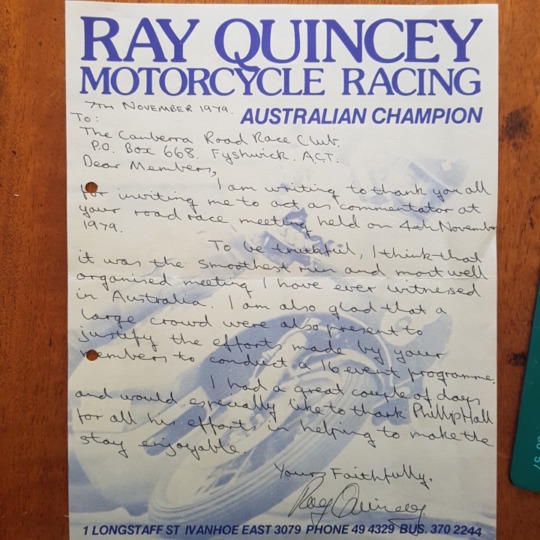 I still have only done a cursory dig through the stuff that I picked up from Canberra last weekend but even a cursory examination has yielded some great discoveries. Amongst the correspondence is this letter, written to the Club by the late Ray Quincey. Some explanation.

After the super-successful inaugural road closure in October 1978 it was decided that the next meeting (was there ever any doubt that there would BE a next meeting?) should be bigger and better. The promise by the ACU before the first meeting that, should we run the meeting successfully, they would look favourably upon granting us an Open meeting status next time was firmly in our sights.

And so, when we planned for the November 1979 meeting, we had in mind that the promotion and everything about the meeting would be slicker and more professional.

One of the areas we looked at was employing a known road racer as the “colour” commentator to provide expert analysis while I concentrated on calling the races. To be fair, it wasn’t too difficult to decide who we would like to have occupying the second seat. Melbourne’s Ray Quincey, a multiple Australian road racing champion was right up near the top of the list.

Ray was, unfortunately a paraplegic, having suffered spinal injuries while racing in a “nothing” event in Belgium in 1978. His recovery and rehabilitation had been long and arduous and the club felt that, along with the “clout” that Ray could bring to the commentary, having him involved could be a valuable part of that rehab. Unsurprisingly, when we contacted him and asked, he readily agreed.

Arrangements for accommodations, etc were duly made and Ray arrived from Melbourne on the Friday and we took him out to the track, drove him around and explained to him the deal. He was keen as and couldn’t wait to get his teeth into commentary duties on the Saturday.

Now, it must be mentioned here that, like everything else about the road closures, arrangements for commentary were pretty rudimentary. The “tower” consisted of a square scaffolding structure with a marine ply flooring. A ladder provided access to the “tower” and a chair and table were hoisted up along with the various wires and accoutrements necessary to provide race commentary.

Ray seemed totally unfazed by these arrangements despite the apparent Heath-Robinson nature of the structure. Patently he was NOT going to be able to climb up by himself but some husky club members carefully carried him up the ladder while another club member brought Ray’s wheelchair, the two operations being coordinated so that both arrived together. Once settled in (with the wheelchair brakes being firmly ON) Ray surveyed the great view of the 2.8km track that the “tower” afforded him and declared himself to be very happy with the arrangements.

Now I know someone is going to ask how we managed to meet Ray’s requirements as far as toilet breaks were concerned. Well, the reverse procedure was applied and worked seamlessly throughout the weekend.

Ray, of course, was the consummate professional, falling immediately into the rhythm of the job, interjecting expert comments where required and handling the handing back and forth of commentary duties slickly, like he’d been doing it all his life. It was a real pleasure to work with him and many complimentary comments were made about his work and about our choice of him to do the job.

Sadly, Ray is no longer with us, it is a sad fact that wheelchair-bound people have a shorter life span than the rest of us but it was a real shock when I heard that he had passed away after a short illness.

I always liked Ray as a racer and greatly admired the grit and determination with which he approached life once it became clear that there would probably never be a miracle cure for his spinal injuries. We had a great conversation at the 30th Anniversary Kenny Blake reunion in 2011, it was terrific to catch up.

I mentioned Ray’s professionalism, the above letter is just an example. Back then we wrote letters, by hand on pieces of paper and here is the letter that Ray wrote to the club after the event. I hope you can read it clearly, let me know if you can’t and I will re-type the contents.

Definitely a treasure from the treasure chest.