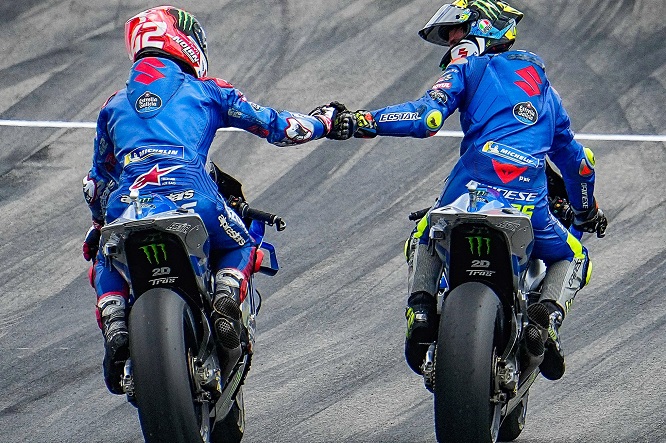 This weekend’s MotoGP finale brings the season to an end (obviously) but it also brings to an end the latest chapter of Suzuki’s involvement in Grand Prix racing. It leaves not only its riders but all of its technical and support staff without jobs (though the riders have since found homes for 2023 and beyond) and is yet another chapter in the factory’s stop-start involvement with grand prix racing over the years.

If you can bear with me, here’s a little potted history of the Hammamatsu’s involvement.

Suzuki’s first foray into grand prix racing was in 1959, yes, that long ago. Along with Honda and Yamaha, Suzuki got heavily involved in the Japanese invasion of Europe producing a bewildering array of amazingly high-tech bikes all based on a two stroke formula (unlike Honda who stuck exclusively to four stroke machines).

In 1965, for example, Suzuki ran a square four 125cc racer which was as innovative as anything else that their competitors were running. Unfortunately, the FIM’s ban on multi-cylindered small capacity bikes that was enacted in 1968 for the 50cc class and the following year for the 125cc class cooled Suzuki’s interest and they pulled out of grand prix racing.

But that was the small bikes, we are more concerned here with Suzuki’s participation in the premier class and that didn’t begin until 1974. Their first “works” team was based on the soon-to-be-famous RG500 and most of the great riders of the era got to race one of them at some stage in their career. Barry Sheene won the 500cc world titles in 1976 and 1977 before the Kel Carruthers steamroller rolled into town and yielded Kenny Roberts a hat trick of title in the next three years.

It does need to be noted, however, that the Suzuki GP bikes were not truly “works” machines as Suzuki had ceded the running of their GP effort to their British importer, Suzuki GB.

When the Roberts era ended, Suzuki won two more 500cc championships with Marco Luchinelli and Franco Uncini (1981 and 1982) and Suzuki began what was to become a regular yo-yo like involvement in grand prix racing, pulling out at the end of that year.

After a three year hiatus, Suzuki returned with the new RGV500 which saw Kevin Schwantz, Daryl Beattie, Alex Barross, Scott Russell and others racing for the factory. This longer involvement eventually netted them their next (and last) 500cc title with Kenny Roberts Jr in 2000.

Chris Vermeulen, John Hopkins, Loris Capirossi and others flew the flag for Suzuki until they again pulled out at the end of the 2011 season amid a world economic downturn.

The gap was four years this time till they returned again in 2015, winning a rider’s title with Joan Mir in 2020 before announcing earlier on this year that they were closing the grand prix effort again.

In every instance, Suzuki’s departure from the circus has been provoked by financial concerns. Suzuki is suffering a world-wide downturn in motorcycle sales with sales of their sportsbikes (the presumed impetus for their grand prix effort) floundering and the factory’s emphasis shifting to EV technology in their auto division.

As it always has been, it’s sad to see them go but hopes of a return any time soon seem to be as faint as ever, (possibly even fainter given the rumours swirling around about a possible emissions scandal similar to that which engulfed VW some years ago)

They will be missed. Talk of MotoGP being “DucatiGP” can only be strengthened with the Bologna factory having an even higher proportion of bikes on the grid in 2023. Worse still is the tenuous thread holding Yamaha to the game and the lack of any other manufacturers waiting in the wings wanting to get into the sport. It is to be hoped that the departure of Suzuki will not commence a domino effect.