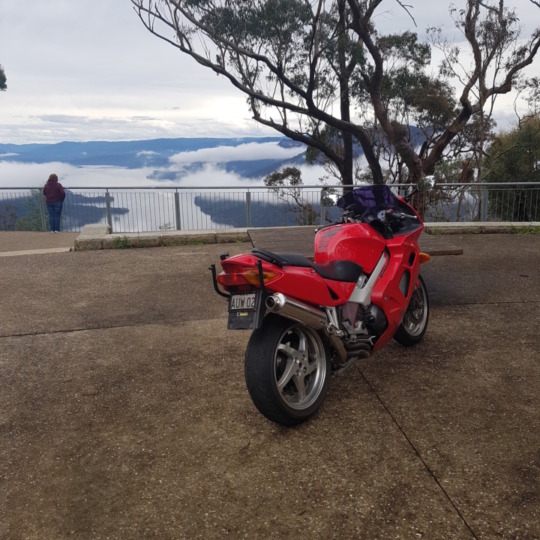 We have received, as predicted, copious amounts of rain and more is yet to come if the weather forecasters are correct. Nevertheless, I awoke to this morning to clear blue skies and zero rain showing on the rain radar.

Helena is running the plant stall at the Quilt Fair again today so she was set to be occupied with that endeavour all day. So, I could sit at home all day and listen to the rain on the roof OR I could take a punt, head out while the skies were blue and see what happened.

My goal was the Burrogorang Lookout overlooking the lake at the end of Warragamba Dam. You may recall that, the last time I decided to ride there, I got all the way there only to find that the National Parks people had the gates locked (this is not uncommon with this bureaucracy who, if they had their way, would lock people out of national parks on a permanent basis.) There appears to be no way of finding out if the park is closed or open so I headed out in the hope that it would be.

Instead of my usual run to the Picton Road via Mount Keira Road, I went up through Unanderra and turned onto Harry Graham Drive which takes you up Mount Kembla and brings you out at the top of Mount Keira (weird, I know, but that’s how it works). Now I have complained about the appalling condition of HGD several times before but I had a good reason fir trying it again.

You see, a couple of weekends ago, Wollongong played host to some high profile pushbike race and the organisers slated HGR as a special stage for the race. Plainly it was going to be totally unsuitable so the local council spent squillions resurfacing and repairing the road so that the lycra loonies could race on it. I wanted to find out what it was like and I was pleasantly surprised. While it was not a total resurface, the rough sections had all been repaired and the ride from the bottom to the top was more pleasant than I have ever experienced.

A short squirt out to Picton Road and along to the town; the temperature was 22, the sky was still clear and it was all looking good. The road from Oakdale to the park is always fabulous with lots of sweeping corners and elevation changes. It wasn’t quite perfect, though, with lots of places still wet from the rains and many places where the water was running across the road, mostly in places where you don’t want it to be.

The gates were open when I got there, hooray. And what a sight it was. The valley was filled with the morning mist and I don’t think I can ever recall it looking better. 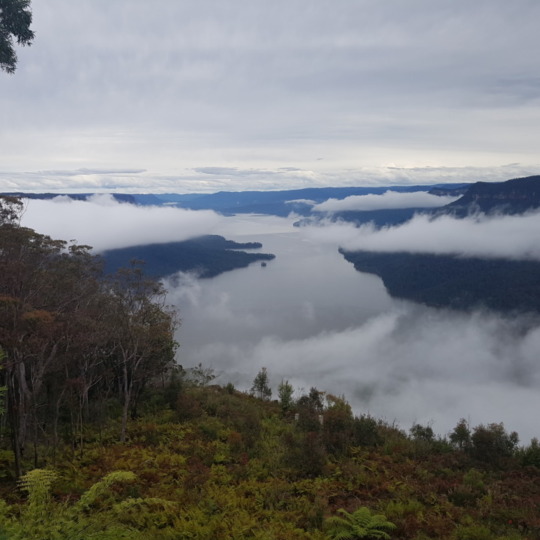 It’s a bit tricky until you realise that it’s the lake you’re looking at and the mist is hovering on top of it. So glad I took the chance to go and see it.

The temperature had dropped to 18° and some clouds were gathering so I figured I’d better be closer to home than further away, so, photographic duties complete, I headed home.

Back through Picton where the temperature was back up into the 20s so, with a careful eye on the horizon, I cut out at Wilton, down through the Broughton Pass and out to Appin. Again, a great riding road.

Appin Road usually has less traffic than Picton Road and so it worked out. Back out onto the tops at Sublime Point, the weather was still holding so I took a dive down Bulli Pass and came home that way instead.

About 180kms for the morning and not a drop of rain though it was definitely looking threatening as I completed the last part of the run down the M1.

Home at about 1230 and, sitting in the lounge chair at about 1, I heard the rain start to patter on the pergola roof.

A pretty dam sneaky ride, if I do say so myself.