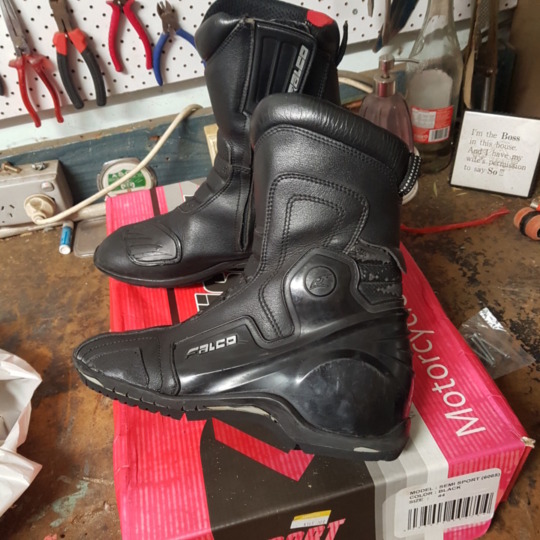 The saga of my motorcycle boots has seemingly come to an end. Last week I was able to take my old, and very worn FALCOs to the boot repair guy around the corner from me (almost literally) and yesterday I picked them up. Resoled and with a few little areas that were starting to come apart re-glued with super sticky stuff that bootmakers use. 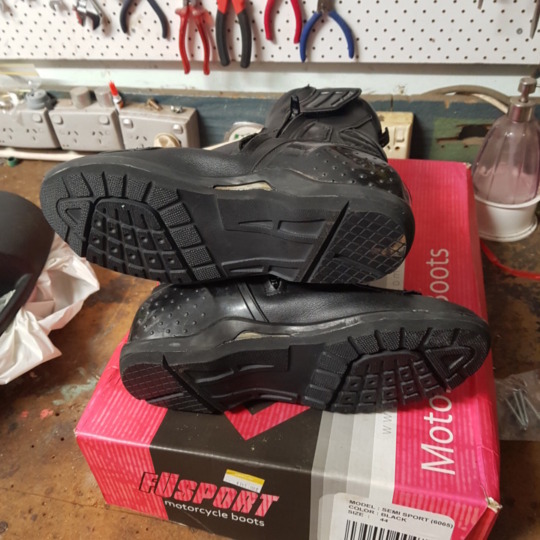 I am assured that these will now last me as long as I need them provided I take care of them, polish them (which I always do, religiously) and dry them out quickly if they happen to get wet.

And all for the princely sum of $80. I am super chuffed. And, as I remarked the other day, I have gone from having NO good boots to having TWO pairs of good boots, you, booty! 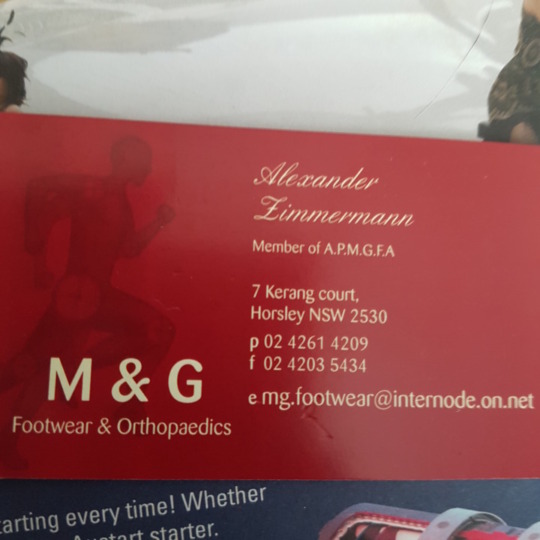 Yesterday was also another good motorcycle day as I received my Imatra road races T shirt in the mail. My good friends, Richard and Mandy Peers-Jones were there for the races, Richard WON the 350 race, and another good friend, Aussie road racer, Lachlan Hill, who was racing in England at the time, brought the shirt home from the UK for me and posted it when he got home. 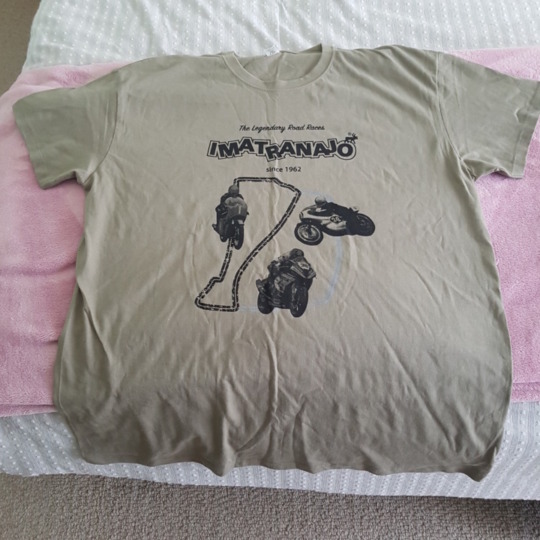 I’m especially chuffed as this is my SECOND Imatra shirt. My wife’s cousin lives not far from Imatra and she bought one for me a few years ago and sent it to me as a Christmas present. I’m not sure, but I reckon I’d probably be one of only a handful of people here in Oz who has one, let alone 2.

Last weekend’s MotoGP from Aragon was filled with drama as usual with Marc Marquez making a lightning start from #13 on the grid to be 6th going into T2 (without running into anyone or pushing anyone out of the way, it must be said). However, the rear tyre, still not hot, slipped in the turn and Marc got off the throttle. As so often happens in the first lap when everyone is bunched up, this caused a domino effect and Fabio Quatararo, running close behind Marc, crashed into the back of the Honda and was out of the race. Significant championship points implications here.

As a side issue, Fabio’s leathers came undone in the crash and he suffered abrasions to his chest and stomach as a result. Now he’s had problems with his zipper coming undone before, I reckon that needs looking at.

Marquez continued on but when activating the shape-shifter in T5 a few seconds later, the bike lurched left straight into the path of Nakagami who fell as a result. Several other riders had to run off the track to avoid the carnage. Marc’s Honda speared straight off the track and he was then seen wrestling the bike along the wall on the way down to the reverse corkscrew. The bike was smoking badly and his rear tyre was covered in oil. He continued to the pits where the mechanics surveyed the bike and pronounced the last rites.

So, what happened? Marc and the team’s explanation was that the bike was damaged in the accident with Fabio and that pieces of Fabio’s bike were wedged in under the back of his bike. Yamaha boss, Lin Jarvis, was quick to label the FQ incident a racing accident, as it plainly was, but said he’d need to look closer at the second incident before he formed an opinion.

Shortly thereafter, Marc was seen, dressed in civvies, entering the LCR pit garage where he apologised to Taka for ruining his race.

Later in the Press Conference, Marc explained what happened again and issued another apology. Haters gotta hate, but, regardless of what was obvious in the telecast and the clarity of the explanation, there are still those who would rather not believe what was very clear.

The epic battle between Bagnia and Bastianini highlighted the problem that Ducati have with having too many riders with a possibility of winning the championship. It also pretty much confirmed why Miller is out at the factory team and the Beast is in. 🙁

This week the circus moves to Motegi, Honda’s home track and HRC will be hoping for a change in fortune. AND the event will be held in MY time zone, too, whoohoo!

I went for a quick ride around some of the lookouts that dot the escarpment behind the Illawarra and here is the result, enjoy.

Oh, and the little plaque there on my workbench has one of my dad’s favourite sayings on it. It says, “I’m the boss in my house and I have my wife’s permission to say so.”