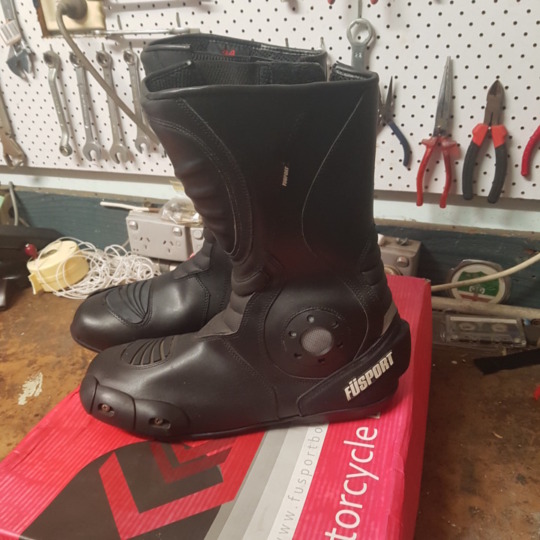 My faithful Falco boots have reached the end of the line. My second pair of the same model, I bought them from Trooper Lu’s Garage in 2014. But, the sole on the l/h boot is worn through and, despite the rest of the boots being in good shape, my attempts to find someone who could/would repair them has been stymied. So, I have been searching for a replacement pair. No go with the Falcos, they are discontinued. I have interviewed a number of potential candidates but nothing really jumps out at me. When you ride as often as I do and cover the distances I do, then a proper pair of boots is essential.

But then, just like the old bus stop joke, two potential solutions to my dilemma arrived at the same time. Firstly, my good mate, Hobbsy, who used to run his own motorcycle shop some years ago, mentioned at coffee that he’d ben reading my FB posts and that he had a pair of boots, size 44, just one size up from my existing pair at home and would I like to have a look?

I knew that Hobbsy would be more than generous with the pricing since I had purchased items from him before at “mate’s rates”. They LOOKED good and, when I tried them on at home, they fitted fine. I was just a little concerned that I’d tried them on while wearing “normal” socks and that they may be a bit tight if I wanted to wear my proper motorcycle socks. But, I tried them on with the good socks and they were great.

So, for a considerable reduction in price from what I would have had to pay for similar at retail, I have a brand new pair of boots that look good, are comfortable to wear AND to walk in. Can’t wait to try them out on a ride, they do look very swishy compared to my utilitarian previous pair.

BUT then, in response to a post that I had made on FB some days ago after finding out that the local Mr Minit (apparently the only shoe repairer around in my area), showed less than zero interest in helping me, I was recommended by several of my local FB friends to a “proper” bootmaker who did all manner of repairs and who lived and worked out of his home in my SUBURB, less than a kilometer from where I live.

Needless to say I hot-footed it (did you see what I did there?) around to his place to not only find that he could easily fix my boots but that he also made all sorts of custom shoes and orthotics for people who needed that kind of help (I do). The price quoted was more than fair given what was involved in the work and so I expect a call from them next week sometime and I should be able to extend the life span of my beloved Falcos by a considerable amount. Since I’ve always been a “repair rather than replace” man, this fits well with my ethos.

So I go from having NO boots to having TWO pairs, ain’t life funny?

As noted already, the BF has a very good seat, the stitching is coming away a bit and the seams aren’t great, but it’s the right shape and will do as a good “buck” for a refurbished item. 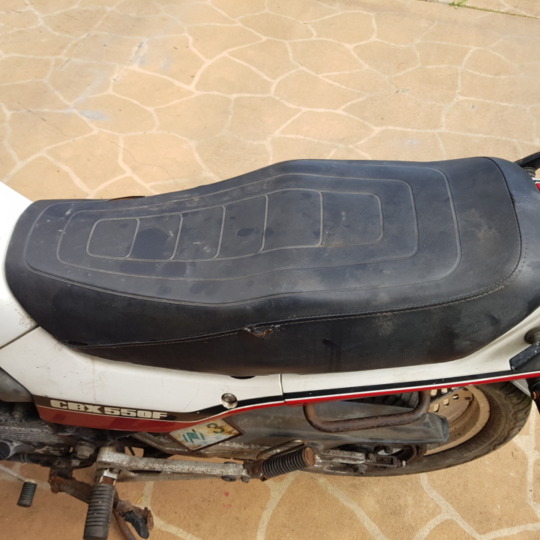 Here’s a picture of the seat that is on Bexie at the moment. 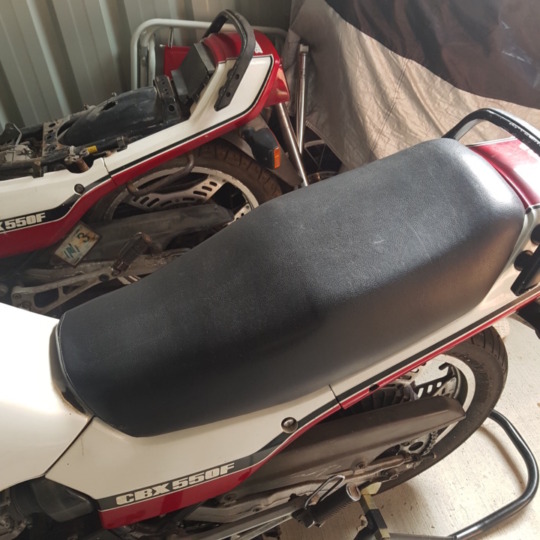 As noted, it’s almost the right shape, the vinyl is in great condition and it’s comfortable. BUT, it just doesn’t look right so I’ll be happy to entrust both seats to the friendly expert up in Goulburn and make Bexie look “pukka”.

On the 4 wheeled front, I continued to be troubled by a mysterious coolant loss in the Golf that my mechanic just cannot trace, despite excellent efforts to do so. My last resort has been to take the car to the VW DEALER and get them to look at it. I have not done so up till now because I knew that their prices are very high.

Anyway, after being treated like royalty at Southern Classic Cars in Wollongong, the problem has been diagnosed as a leaking EGR. Now I’ve known all along that the symptoms the car has been displaying are symptomatic of a leaking EGR but I had the EGR replaced just two years ago, just after I bought the car and it was done under warranty. It seemed inconceivable to me that it would be defective after only two years.

It seems, however, that that IS the problem so an expensive repair is coming up…BUT nowhere near as expensive as I was expecting because the EGR unit comes with a TWO year warranty so I will not have to pay for it, just the labour to R&R. Phew. I really didn’t want to have to buy another car but the nagging about the coolant level being low was starting to get on my nerves. So, thanks to my good mate, Mickey who diagnosed and recommended that I take the car to the dealer, we may be close to a permanent solution. Win-win.

Remy Gardner has admitted defeat on his MotoGP aspirations and has signed with a Yamaha team in WSBK. I hope he enjoys his racing, does really well and rubs KTM’s nose in it for not supporting him the way that they should have.