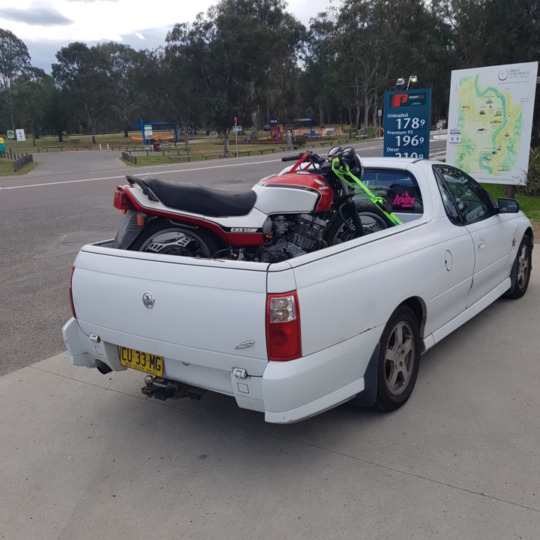 So, on Thursday, I went up to Cessnock and collected the Barn Find (hereinafter to be known as the BF). My good mate, Henri, lent me his ute and my brother, Paul did the trip with me to help with the loading and also to stop me falling asleep at the wheel. Even though going up the M1 would have been quicker it involves Sydney traffic and tollways both of which I cannot abide, so we took the slightly longer, but, as it turned out, almost totally traffic-free inland route as well.

The local councils have certainly been hard at work repairing the damage from the months of rain but there is still plenty to be done. Once north of Wilberforce it was clear that the repairs to the Putty Road will take a pretty long while. That said, we had a completely clear run up the Colo and on through the transport stage. We only encountered one car before we reached the Ten Mile but he was intent on travelling much faster than us and he disappeared pretty quickly.

Glen lives on the other side of Cessnock so it took a little longer to get there than we expected but he had more than done his bit to make the pickup as easy as possible. Copious amounts of WD40 had been applied to the appropriate moving parts and the bike rolled really well given the 19+ years it had been in storage. Getting it onto the ute and tying it down was simple and the ute barely noticed that the bike was there.

Getting away from Glen’s place, however, was not as easy. He’s a really cool guy with a long history of motorcycling, car restorations and music. What a fatal combination. We spent a great deal of time chatting until we had to reluctantly call a halt and head home.

We hadn’t had lunch at this stage but our hopes of eating at our favourite eatery at Pokolbin were dashed when we arrived to find that they had just closed for the day. Bugger. The pangs were really gnawing at this stage and it looked like we were going to have to make do with a can of drink and some potato chips. However, when we pulled into the servo at Broke, the actual last-gasp saloon before we hit the barrenness of the Putty, we were amazed to find that their café, which has been closed for YEARS, was open and we dined out on a great chicken burger, some chippies and an excellent coffee; sometimes the travel gods do shine on you.

Another astonishing run down the Putty with zero traffic heading in our direction bar a speedy in a Prius who we didn’t see for long and, as darkness fell, we arrived at the outskirts of Sydney. A serious road accident at the East Kurrajong turn-off was a delay; the rescue chopper was in attendance so it must have been a bad one.

In deference to the fact that we already knew that the southbound lane of the Oaks Road was dreadful AND the fact that it was now dark, we opted for the boring, but safe Northern Road, Narellan, Appin Road and home, reaching the destination around 2100, much later than expected but not really surprising given the delays.

Friday was recovery day so this morning I dragged the BF out of the garage onto the driveway and gave it a clean-up of sorts. The alloy parts are all oxidised, of course, but the rest of the bike is in amazingly good condition given its history.

The Good: All the plastics are in great shape; side covers have all the locating tabs still intact, all the indicators are in good shape (front left is missing, not doubt smashed in the accident) and lenses are intact and still the correct, bright orange colour. Headlight is great and the rear mudguard is intact, having escaped the usual “cut it off” lunacy that was, and still is, so popular. Pirelli Phantom tyres are period-correct, the bike having done only 36000kms, they are probably “first change” after the factory originals; it looks funny to see them again after so many years. Both tyres were down but responded well to a hit with the compressor and appear to be holding pressure. They will do to enable me to wheel the bike around.

The original owner had purchased a new set of front forks to replace the bent one but had not fitted them so I have them if needed.

The seat is amazingly good considering its age and storage history. It will need repadding and a new covering but it is correct and will provide the repairer with a perfect pattern. My present seat is well-covered and comfortable but nowhere near the correct size and proportion so buying the BF and getting it done will be worth the cost of travel to get it just by itself.

The instrument panel is complete with the gauges correct and totally unfaded, another indication that the bike has been stored under cover.

The bike still has the two passenger grab handles, the left-hand one of which is also used to lift the bike onto the centrestand. My bike had both of them removed by the original owner in order to fit the Krauser pannier system.

Reference the Krauser pannier racks, it is the fitting of those that means Bexie does not have the correct rear indicator brackets. I now have replacements!

The Bad. Given that the bike is only a rolling spares kit, the bad isn’t that relevant. The front brakes don’t work at all and the brake and clutch levers are broken. There is surface rust on the tank and a small dent that will probably come out. I have not yet examined the inside of the tank as the only key operates the ignition but not the petrol cap or the seat release. Probably have to get a key man to sort this one out. Some bits from the front forks are missing, a legacy of the original owner’s aborted attempt to replace the bent one with the new set.

The Ugly. The exhaust system is totally US, but I don’t need it anyway. The engine and all the alloy parts are notably oxidised, as already stated. This CAN be fixed but at considerable expense and I don’t need any of those bits ATM anyway.

This morning’s wash and tubby revealed what is commonly known as Honda Build Quality. the bike has been stored, unused for well over 30 years but the overall condition is amazing. It is VERY tempting to consider making it a restoration project rather than a spares bike, but who knows what evils lurk inside the engine?

The gallery below is of my photos taken BEFORE I washed the bike. I know photos make it look better than it actually is, but, even so, it’s pretty amazing.

And here she is after her first wash in nearly 20 years! 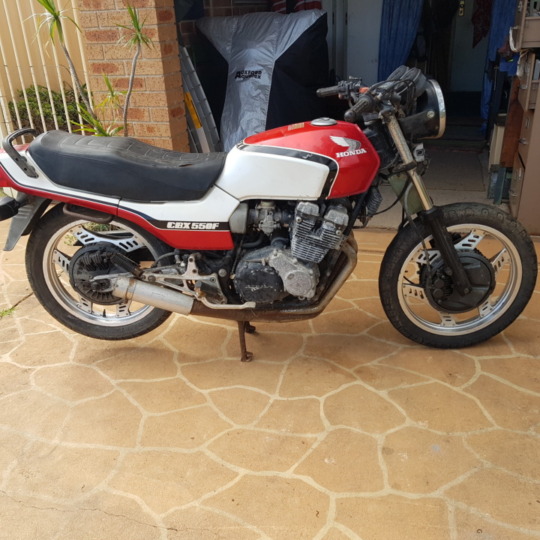