You are here: Home / News and Updates / A very difficult day 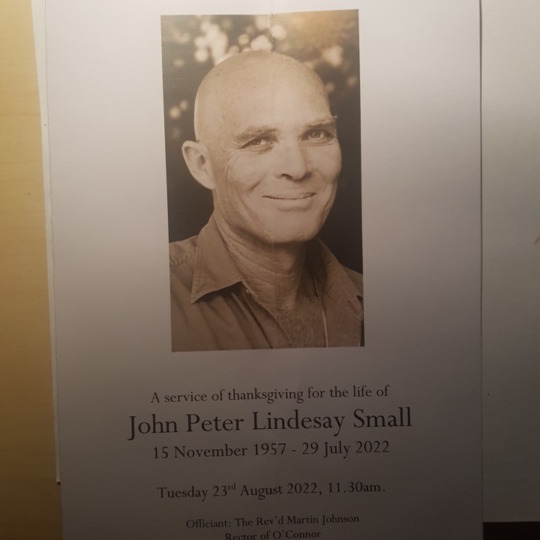 The greatest composer of all time, Wolfgang Amadeus Mozart, passed away in 1791 at the tragically young age of 36 years. It is said that the weather on day of his funeral was so bleak and awful that not even his family were able to attend, the only person being present at his internment was the grave digger. It is said that Mozart’s dog also attended but that is the reason why we do not know where he was buried nor do we have a grave or suitable memorial where the faithful can gather and pay their respects.

Thankfully the relatives and friends of the late John Small are made of sterner stuff.

John’s funeral took place yesterday in Canberra on as bad a day, weather-wise as I can ever recall, and I lived in Canberra for over 20 years. The ambient temperature at 1130 was just 4° and the sky was overcast and drizzle was falling. There was no indoor service, the formalities taking place at the grave-side followed immediately by the internment. It is a testament to the regard with which John was held that well over 40 people were in attendance and that they endured the appalling conditions to pay their respects.

The eulogy was written by John’s sister but was delivered by her partner, Tony Griffiths. Tony spoke of John’s many life experiences and dwelt on his humanity. his compassion and his love for the natural world. I was also able to speak and I spoke about the motorcycling part of John’s life and also his contribution to that through his photography. I also recalled the many instances where we had been able to catch up for coffee and a chat while we were travelling the south coast and were able to call into Tilba and spend valuable time with him.

John died at his home of a massive heart event; tragically, his body was not found until he had been dead for two days; the thought of him dying alone and of his death being unnoticed is too awful to even contemplate.

CRRC was well represented by myself, Phil Thompson, Phil Domaschenz, Mick Howard and Michael O’Connor, it was good that so many of John’s buddies were able to be there.

The rain had set in around Goulburn on the way down and persisted for the whole of the journey home, the ambient hovering around 3° for much of the journey until I started heading down Macquarie Pass, some of the worst driving conditions along the Hume that I can remember. I was glad to be home, warm and dry and grateful that I had been afforded the opportunity to pay my respects this last time.

John was only 64 years old, way too young.