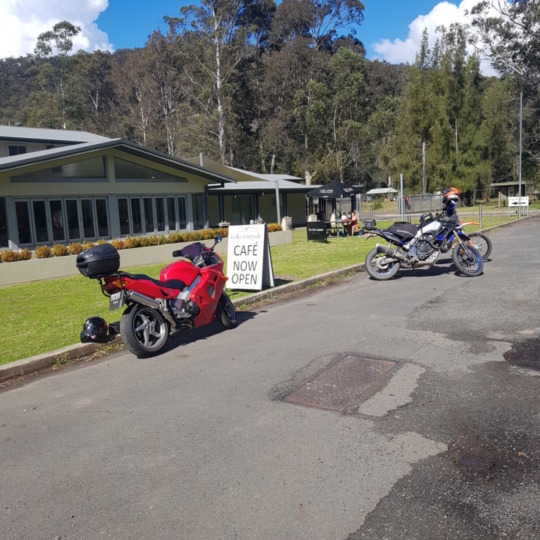 You know the old saying about best laid plans? I fell victim yesterday.

Helena has a huge weekend of arty/crafty things this weekend. An art stall at the Red Point Gallery in Port Kembla on Saturday and sewing/socialising today, so what better opportunity to go on a ride could you require? Added to this, the weather forecast looked good with only a minor chance of a few showers.

The plan was up the Putty to Singleton, stay overnight, have a play on the Ten Mile in the morning and then head home via Wollombi, Jerry’s, the Old Pac and home for tea.

I had all day to do just over 300kms so I didn’t hurry getting away, pack some essentials and on the road a bit after 9. It had rained overnight so softly, softly on Mt Keira and out onto the Picton Road. 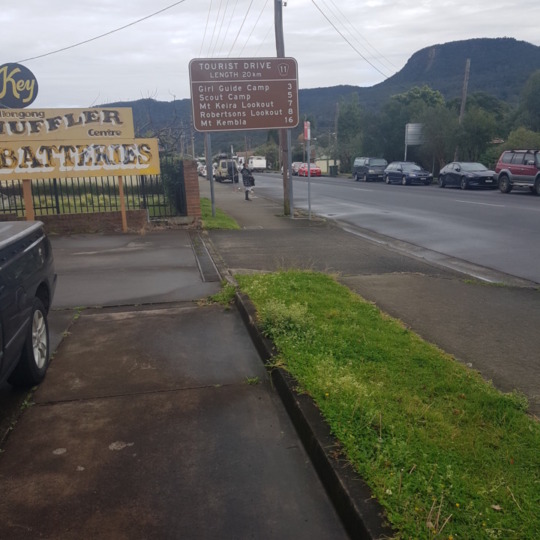 It was sunny, but cool on the tops, temperatures hovering around 13. Onto the Oaks Road it got quite a bit cooler, dropping two or three degrees. The local council has done a pretty good job repairing the road after all the rain, the northbound lane being in better shape than I’ve seen it in quite a while.

It WAS Saturday morning so I expected traffic to be a bit chaotic through Penrith and Windsor but it was much worse than I thought; it took ages to get out and onto some clear road again. By the time I was heading out of Wilberforce the road was empty and I had a terrific run to Colo Vale where I stopped at the always-great Colo Riverside Cafe for brunch. (see photo above).

The place was very quiet and my toasted sandwich and pot of tea went down well. Sadly, the cafe’s location in the valley means that there is no mobile reception. You CAN log onto their Wi-Fi but, by the time you’ve done that, it hardly seems worth the while.

On a long ride I generally don’t eat breakfast and have my traditional coffee before I head out, it means that less visits to the little rider’s room will be required. I’ve also found that tea does a better job than coffee for the same reasons (it’s always cheaper, too.)

Hardly any traffic passed heading north while I enjoyed my repast so that was looking good as well. A great run up through the twisties to Colo Heights then the mandatory 80 through the town before gassing it up in the general direction of the GGC. By the way, please ignore the speed flags in the video, there is no way I did 155kph out on the flat (there’s no way I’d do 155 ANYWHERE.)

GGC had a big event planned for the morning so I didn’t stop, I hate crowds. And, just as an aside, while I LOVE Kimmie and the café, if I want a proper, served-at-the-table, cutlery and crockery meal, its Colo Riverside every time.

There was some cloud in the distance which needed watching but I headed out, anticipating a great afternoon playing in the twisties, the temperature was 21° and all was looking good..

..except that it wasn’t. No more than 5 kms past the GGC, the darkness descended, the temperature dropped to 10° and it started belting down rain. Like, that quickly. It took me a couple of minutes to find a place to turn around (my first choice turned out to be a mud flat and I nearly ended up bogged there). The driveway of the Coptic Orthodox Monastery is paved so it was a better choice and I did the U turn and sped off south, seeking the edge of the storm.

Just past the GGC, the rain eased then stopped though the cloud cover did not lift. I was already pretty wet as the storm had hit so fast that I didn’t get time to stop, open the top box, get out my wet suit and put it on. Never mind, the wind should dry me out, yeah?

No. I had already decided that I was heading home, I’ll ride in the rain if I get caught in it and have the gear but this was no way to set out on a two-day ride.

Sadly, a mere 10 ks or so SOUTH of GGC the cloudburst that had obviously been chasing me hit with a vengeance; visibility dropped to almost nil and I consoled myself with the fact that I knew the road intimately and could get out of this by the Braille method if I really had to. I don’t know how long I rode for  in almost opaque conditions but I “felt” my way south until the rain eased and confirmed my decision that I was much better off home, warm and dry.

Of course, then there is the consolation that, if the rain has stopped and you keep it gassed up, AND, if you can do it long enough, most of your gear AND you, will eventually dry out. And so, by the time I got to Penrith, things were looking brighter.

Some coffee and a nibble at Cranebrook and ready to do battle with Saturday afternoon traffic on the Penrith by-pass. It wasn’t as bad as I was expecting. The Oaks Road heading south is still appalling, as bad as I have ever experienced it; massive wash-aways and potholes, out-of-the-seat stuff. I don’t know why they don’t bother fixing the southbound lane. By the time I was out on the Picton Road MOST of me was dry but I knew that my gear was going to be in for a session in the drying room (aka our sauna).

But, Sod’s Law always gets you when you’re feeling cocky. Just before heading off the highway and down Mount Keira the rain started again and persisted until I’d nearly got home. Errrgh. My nature’s drying method had all been for naught.

Home around 5, cold and wet and ready for a coffee. 450kms of mostly good stuff but plenty of crappy stuff thrown in just to keep me humble.

I hope you enjoy the video even though it doesn’t show much, I didn’t really stop and take lotsa pictures (obviously).

Oh, but, just south of GGC this happened. 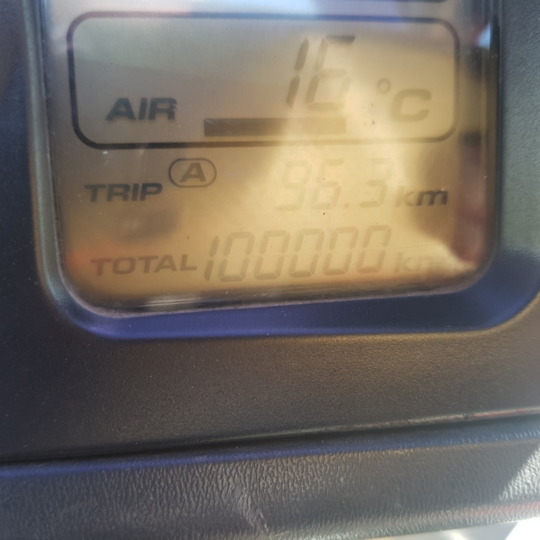 I bought Rhonnda in January 2017 and she had 53000kms on the clock. As most of my VFR buddies are saying, “She’s hardly even run in yet.”