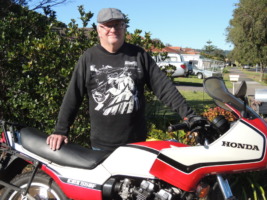 Here on the south coast of NSW we have very clearly defined seasons and often the delineation between them is quite stark. Nowhere has this been more obvious than the last couple of weeks that mark the close of Autumn and the start of Winter. Apart from the incessant rain, the temperatures through Autumn were mild to put it mildly (did you see what I did there?) Ambients during the days were mid-20s which is definitely pleasant.

BUT, almost like the calendar had been set to it, the 1st of June saw the arrival of Winter in all its fury. Temperatures have been in sub-teen range since June 1 and the last week has seen us being battered by gale force winds all along the coast. Now, if you’ve followed this blog for any time at all you will know that, traditionally, our windy month is August. You can be certain that a large proportion of the month will see us under the influence of strong, often violent Westerly winds.

This impacts us particularly since our house faces due west and the winds batter the front of our place with unrelenting force.

But the winds have arrived early and put a stop to play, as they say in the cricket commentaries. We have spent the last week hunkered down at home, wind-proof shutters closed on the front of the house and, in spite of these precautions, having to use ear plugs to get enough quiet so we can sleep.

So, no riding, none at all. Now, before anyone accuses me of being a fair-weather rider, I assure them that I have ridden in all sorts of conditions over the years and certainly in pretty windy ones. But, yes, I am getting old and, choosing which conditions in which to ride and which to stay home, is happening more.

Yesterday offered a relief from the gale-force winds and a pleasant 17° temperature so, once taking care of the chores, most specifically, cleaning all the crap in the yard that the winds had blown in, it was time to go for a ride.

But which bike? Decisions, decisions. In the end I decided on taking Bexie out, based mainly on the fact that it had been a couple of months since she had last had an outing and bikes don’t like sitting for long periods unused. A long ride on the VFR is planned soon so Bexie it would be.

Now I am very grateful for how well Margie looked after Bexie during her 18 years of ownership. Not only was she garaged for the entire time so her paint still looks pretty good, but Margie and Guy took care of mechanical things as they needed to be. The old Tranzac exhaust, probably as old as the bike itself, was replaced with a brand new stainless steel system (arguably worth more than the whole bike allowing for the cost and freight from England). I should add that I had installed the old system and it was second hand when I bought it!. The rear air-assisted, oil-damped shock absorber that never worked properly from Day 1 was replaced with a newer unit from a CBR250RR and the cylinder head had been off for a check up as well.

And Guy, who has a “thing” for lithium batteries, had replaced the old Yuasa lead-acid unit with a lithium one. And it has been this feature which, most of all, has made owning Bexie again such a breeze. Now I’ve read some stuff about how lithium batteries don’t work well in older bikes but my feedback is that they work great. When I first brought Bexie home I diligently hooked her to a battery tender in light of the fact that I wasn’t going to be riding her often. And that worked brilliantly. Every time I went to start her she started, cranking over multiple times until the fuel had been pulled through from the tank (always turn off the fuel at the end of a ride with an old, carburettored bike).

Until once I forgot the battery tender, went to start the bike the next time and it started fine with seemingly oodles of volts available from the battery. Last time I rode, the bike hadn’t been started for nearly 6 months but yet it started up easily, yahoo for lithium batteries, it seems. And, yesterday she started fine again despite having not been on the battery tender since the last ride. Allowing for the very cold temperatures recently, this was a big “plus” for the new-tech batteries.

As for the ride itself, it was fabulous. The roads were clear, a traffic-free run up Macquarie Pass (video to be added later) and a good run down Jamberoo Mountain between two guys on bikes who obviously knew well what they were doing. I turned east at Jamberoo and added the loop to Kiama and back and then followed Jamberoo Road to the highway and home.  About 110kms all-up and thoroughly trouble-free. Oh, the guy in the Audi TT who passed me over the double unbroken line outside Kiama also got his fair share of Karma almost immediately finding himself snookered between two slow-moving vans all the way till the other side of Jamberoo 🙂

Bexie is now 40 years old. In many respects she, along with her Kawasaki peer of the era, was the forerunner of the modern 600cc supersports bike. Small, light, good power (65bhp), six speed gearbox and a good, revvy engine. Is it any wonder that she still feels so “modern” to ride?