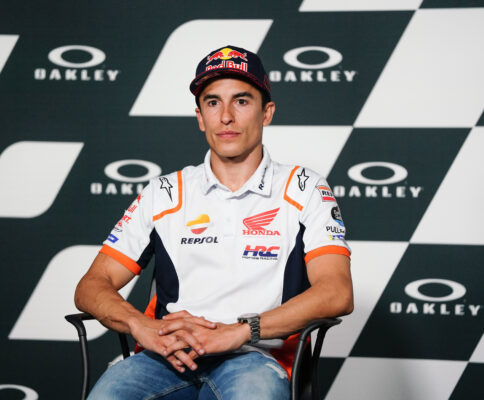 This weekend’s Catalunya Grand Prix is taking place without Marc Marquez who, immediately after last weekend’s Italian Grand Prix, flew to the USA for further surgery on his troublesome right arm. He was checked into the Mayo Clinic at a hospital in Wisconsin and was operated on last Monday.

Later this week the hospital issued the following bulletin.

“Today we had the opportunity to operate on the right humerus of Mr. Marc Marquez. The procedure was completed in approximately three hours. Despite the complexity of the procedure, the final outcome was satisfactory. Surgery consisted in removing the proximal two screws of the posterior plate previously placed by Dr. Samuel Antuña on December of 2020, followed by a rotational humeral osteotomy.

“Such procedure involves creating a transverse cut of the humeral bone to rotate the humerus along its long axis. The amount of rotation performed today was approximately 30 degrees of external rotation. The humerus was stabilized in the new position using an anterior plate with multiple screws. Surgery was completed uneventfully. We would like to wish Mr. Marquez a swift recovery and a successful return to his professional career.”

This bulletin is the clearest indication so far that Marc’s previous surgery was botched, a pretty damning indictment of the care he has received so far.

Now, I’m no doctor but I can “Goggle” with the best of them so let me try and straighten out the medical gobbledygook.

1. It is clear that Marc’s humerus has been repaired using a plate on the outside of the bone. The use of the term “posterior plate” indicates this. Posterior means at the back.

Now, you will remember that the original repair of Marc’s badly broken humerus (I should clarify that the humerus is the large, long bone between the shoulder and the elbow) was done using one long plate along the outside of the bone. This was deemed to be the best way of treating his particular injury (and apparently still is).

However, it was unsuccessful and, despite Marc returning to the track the very next weekend, it was clear almost immediately that he would not be able to race even though he actually tried to do so. What few photos from that weekend that were released showed terrible bruising to the upper arm, not a pretty sight at all.

Not long after this HRC issued a bulletin saying that Marc had again injured the arm supposedly twisting the titanium plate on the humerus while opening a window. Now, if you believed that then I have a bridge over the harbour in Sydney that I will be happy to sell to you.

Another operation, in December 2020, the one referred to in the latest bulletin, was performed, Marc had his knuckles rapped and he was told to go away, be a good boy and let nature do its job of healing his badly broken arm.

Thankfully, he was much more circumspect this time and treated his rehabilitation far more seriously.

BUT, the second visit to the operating table seems to have exposed him to the dreaded hospital-borne infection and doctors have been fighting that infection ever since.

“…the three previous operations involved trying to heal and cure a serious infection in the original fracture, sustained in the 2020 Spanish Grand Prix…..“

2. “proximal” is a medical term that means ”situated nearer to the centre of the body or the point of attachment, eg “the proximal end of the forearm” So, the top two screws that secure the plate on the back of the humerus were removed in this latest operation.

3. Once this was done, then a transverse (crossways) cut of the humeral bone was made so that the humerus could be rotated along its long axis. The amount of rotation performed was approximately 30 degrees of external rotation.

Here is a diagram of the surgery, note that, in the graphic, the lower two screws have been removed whereas, in Marc’s case, the upper two were. 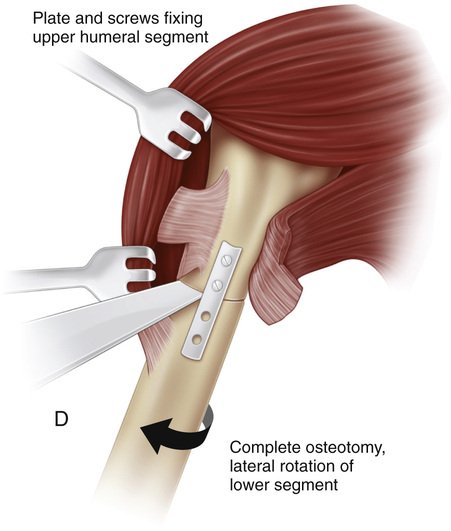 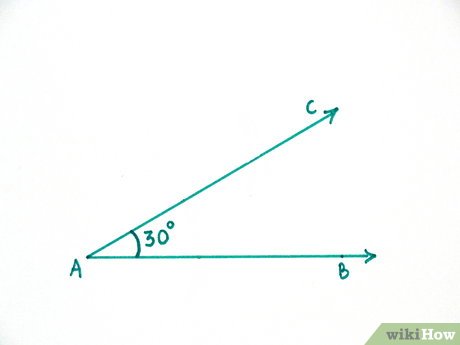 4 . The humerus was stabilized in the new position using an anterior (front) plate with multiple screws.

Now the recovery process will begin again because the humerus has effectively been broken again and doctors must now wait for the bone to knit again and begin to strengthen. Quite how long this will take is going to depend on many factors but Marc’s age and his great physical condition must surely give him a great chance of it being quicker than most people who would have undergone this surgery.

BUT, remember that I said this latest bulletin, the most candid and revealing of any that has been issued by those caring for Marc since this whole, sorry tale began, indicates that the original surgery, in December 2020, was botched?

What this latest bulletin clearly shows is that the humerus was incorrectly aligned in that first surgery, by about 30 degrees. So, whether it is inward or outward-turning, Marc’s right arm has been twisted unnaturally ever since that operation. Note that the bulletin says that part of the purpose of the operation was to “relieve pain.” I’m not surprised he has been in pain, all of the muscles, tendons and ligaments in the upper arm have been twisted into an unnatural position ever since that operation. No wonder he has been unable to get into a comfortable position on the bike and use his right arm in the way that he was able before the accident.

Now, you may be wondering if there is any science in this conclusion or whether I am just guessing? I assure you I am not because my own personal experience bears this out.

During a six hour operation to fix these two fractures and many others, a femoral nail (pin) was inserted into the femur and the head of the femur was secured to the femur by the use of a DHP (Dynamic Hip Plate) (see attached x-ray) 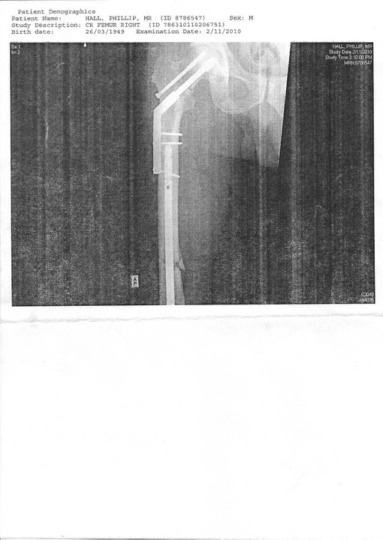 There were two consequences of this surgery, performed in a public hospital. The first was that the nail was blocked by two proximal screws that were used to secure the DHP and so the gap between the two ends of the broken femur never actually closed completely. As a result, my right leg is 1.5 cm longer than my left.

The second has only just become clear to me and it is more annoying than I can possibly say. When the femur was repaired using the femoral nail, it is obvious now that it was not aligned properly, the consequence of which is that my right foot points outwards rather than straight ahead. Yes, by more than 20°. As a result of this I have endured nearly 12 years of constant pain in my right thigh, pain for which there is no cure. As I said, it has only just become clear to me why this is so.

Can I do anything? No. The insurance pay-out over my accident means that I have no legal redress. Going back to hospital to have it rectified would be at my own expense, leave me exposed to the possibility of hospital-borne infections, involve another extended rehab and be risky in the extreme for someone my age.

So, was Marc’s surgery in 2020 botched? I believe it was, the evidence certainly seems to point that way. What is the long-term prognosis? I can’t say but, you’d have to think that, if his arm is now pointing where it SHOULD be, he should be out of pain, have more flexibility and be able to perform the required physical functions much more easily once he has recovered from the operation.

Please understand that the above is my “take” on the situation, I could be completely wrong, but, as my dad used to say, if it walks like a duck, swims like a duck and quacks like a duck, chances are, it’s a duck.

Like everybody else in the sport, I wish him a full and complete recovery, thanks for reading.