You are here: Home / News and Updates / Long, long weekend

Last weekend I was again invited to commentate at the Vintage Speedway Association’s meeting at Illabo Motorsports Park near Junee in southern NSW. The event was round 2 of the club’s 4-round series for 2022. It was one of the few opportunities that drivers/owners of vintage speedway machinery get to actually run their vehicles on a track rather than just display them (which they also do, of course).

None of the old cars meet modern-day safety requirements (the sprintcars even run without mufflers!) and so they are not allowed to race at a registered speedway. That’s not to say that safety isn’t an issue but the current regs are so stringent. Yes, the cars could be modified to MEET the regs but then they wouldn’t be period-correct vintage cars. Some vintage divisions do run demonstrations at registered tracks but most promoters are more interested in running the modern cars which are faster and more suited to the tastes of modern-day spectators.

Illabo, then, is one of the few places where the cars can get a good run, and the owners/drivers certainly relish the opportunity to do so. Over 50 cars were in attendance spread over a number of divisions.

But, first, let’s get back to the long weekend. Because the meeting is run at a showground track that has no lighting, the events are held as daytime meets. So racing is on Saturday. Knowing this, we set out to Illabo on the Friday morning (after our customary brekkie at Passionate Palate at Kanahooka. Macquarie Pass was due to open on Friday but we left too early to take advantage of that and had to take Jamberoo Mountain instead.

We had a dream run up the mountain and stayed on the main road through Moss Vale and out onto the Hume Highway. I had no intention of droning all the way down #31 so we cut out at the Harden turnoff and cut across country through Harden, Temora and into Junee. The countryside beyond the range has had much less rain that the coast has but it is still looking very nice and the scenery is well worth admiring. I took the opportunity to do some passengering and Helena drove once we left the Hume. We arrived in mid-afternoon and got settled into the caravan park cabin that the club had rented for us for the weekend.

Saturday was race day and, for me, it was out to the track early to get out the lie detector and do my customary lap of the pits ferreting out information. Helena stayed in town to catch up with an SES buddy of hers who works for the organisation in Wagga and they had a great time exploring the sights of Junee. The meeting was a special one in that it was a tribute to the speedway great, Barry Graham and his son, Steven. Illabo pits are very laid-back as the crews are just there to have fun and run some laps, no pressure. 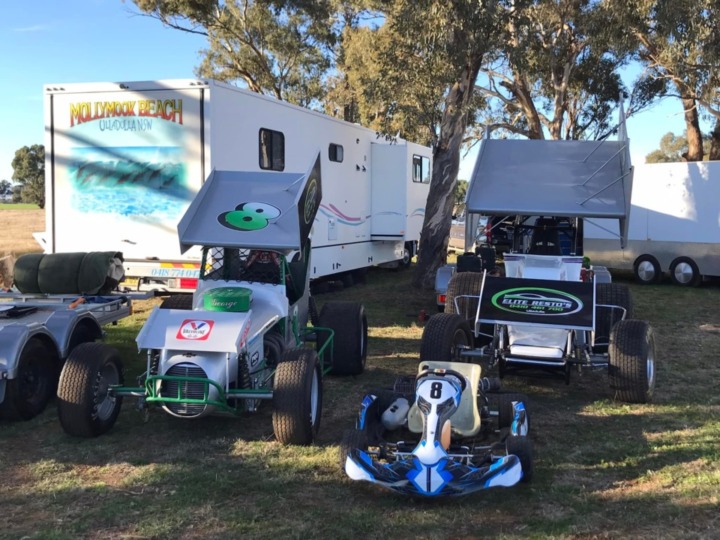 Many of the competitors are people I know, including the boss of my local motorcycle shop, Gary Rooke and his mechanic who does most of the servicing on my bikes, Jason Pruen. Gary had brought down his old sprintcar and was planning on running the meeting without a wing on the car. In case you think this is odd, wingless V8 sprintcar racing is huge in the USA and Gary often heads over to the States during our winter and runs the wingless shows over there so running without a wing wasn’t going to be a problem.

I was delighted to find that one of the great speedway midget drivers of the late 60s was there and not just as a spectator. Gordon Benny was one of the real rough and tough competitors around the rudimentary tracks like Rowley Park in Adelaide and later the more up-to-date Sydney Showground. Still sprightly and more than anxious to punt a midget racer, Gordon admits to being 90 years old. He certainly didn’t look that old belting the car around on Saturday.

Because of Speedway Australia’s regulations, the cars are not allowed to race, per se, see my comments above about technical regulations. The track has no fences and safety wires, the only concession being some piles of old tyres on the outsides of the corners. The events are run for each division, ranging from old TQs, vintage speedcars (no roll cages, just a roll bar), later model “caged” speedcars, sedans, super-modifieds and sprintcars. The programme of 10 events is run through 4 times so each driver gets four runs. In fact, they get more because a lot of drivers run two cars and cross-enter in their mate’s cars as well.

As noted, it’s all very laid-back. Once all the cars are on the track the green light goes on and they trundle around for 6 laps till the checker comes out. It’s not racing but it does often look like it especially when a couple of cars of similar vintage happen to be on the track at the same time. Most of the time, however, the speed differential between the better cars and the slower ones and the “keen” drivers and the ones who are just out for a gallop is enough to ensure that the cars are well-spaced out on the track and that no “racing” takes place.

Having said that, there is always an element of competition and, as long as the drivers don’t get too carried away, passing is allowed and drivers are free to give it the big stick if they feel inclined. Gary Rooke was awesome in the wingless V8 and Barry Graham’s performances in his midget were very impressive to name just a couple.

There was a special presentation to Gary and Steven during the lunch break after which the two drivers were allowed to do a few demo laps for their own and the spectators’ enjoyment. Barry was in his vintage car but Steve was driving a current-spec car and it sure showed. 15 years ago Steve suffered a career-ending accident in this car and he hasn’t even SAT in a race car let alone driven one since then. Right up until the last minute he was still unsure if he could do the demo laps, but, like the true champion that he is, he screwed the courage dial up to maximum and headed out onto the track.

For half a dozen laps the two drivers circulated side-by side providing the crowd with a unique spectacle. Just when it looked like they were going to turn on a two-car match race, Barry pulled into the pits and left Steven out on the track. Freed from the responsibility of pleasing the crowd and the photographers, Steven put the boot in and carved out half a dozen lap at near racing speed, immaculate lines into the corners, head perfectly still as he looked through the corners and the engine roaring like it should. It was an amazing performance.

When he pulled into the pits he parked the car next to his dad’s car he was immediately surrounded by well-wishers. Most knew what it had taken for him to even GET INTO the car let alone drive it and it’s fair to say that, amongst the family, friends and the crowd in general, there probably wasn’t a dry eye in the place.

It was a great day at the track and a real privilege to be there and see the speedway community pay tribute to two of their great ambassadors. As Barry said when I interviewed him, “If you don’t have a past, you won’t have a future.” True words.

We stayed in the caravan park on the Saturday night, had breakfast at the Licorice Factory on Sunday morning and then headed north, this time on the Hume as we were heading to Canberra. My good mate, Chris Mundy, who first suggested 14 years ago that I started writing a blog and who still maintains the technical back end of this site, was out of town which was a disappointment so we moseyed on through, out to Queanbeyan and onto the Kings Highway, headed for Batemans Bay.

The Kings can be a real bear, especially on the weekend and Canberrans flock to and from the Bay for the sun and the sand and the surf, but we got a great run and pulled into our motel stop at Malua Bay around 4. No rain of any sort for the three days but it was predicted for Monday. That wasn’t really a problem as we were just going to toddle up the coast and home and I’d done that stretch in the rain nearly as many times as I’ve had hot dinners.

The trip home was uneventful and we got home late afternoon, tired but having thoroughly enjoyed a long, long weekend. Oh, funny thing, on the Hume on Sunday, the car went “beep” and a graphic flashed up on the display saying, “Driver Alert. Take a break.” It was accompanied by a picture of a steaming cup of coffee. Yes, I’d been driving for two hours straight and the car was reminding me that that was enough. So, yes, we took a break.

I love my retirement, I love travelling with my wife and I love exploring our wonderful state. I might even do some more.