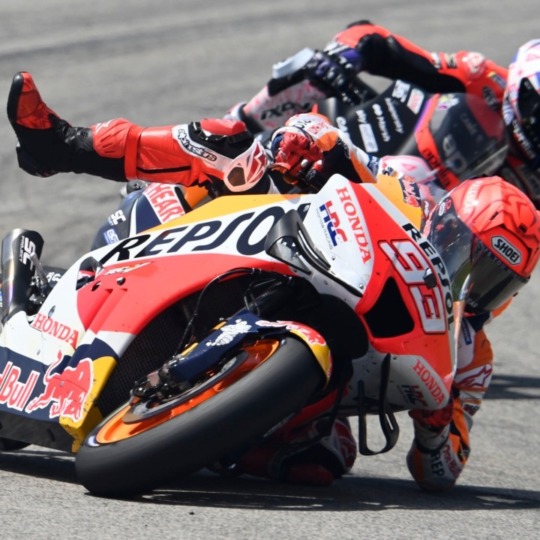 After watching last night’s Le Mans effort my blood is simmering to see my favourite manufacturer stuffing around PRETENDING that they’re interested in being a MotoGP winner when plainly they’re not.

Marquez made a brilliant start from 10th, forced (cleanly) his way past Taka and Quats and looked like a real contender. A couple of laps later, Quats waltzes by, disappears into the distance and Zarco, spurred on by the home crowd also dines out on Marc’s POS Honda leaving Marc to cruise home in a lonely 6th place, 15 SECONDS behind the winner and miles in front of the other three Honda riders.

Is that the best you can do, Mr Honda? I mean, since when does an Aprilia finish in front of a Honda?

This year, we were told, pre-season, that Honda was going to go in a different direction. Instead of building a bike that only Marc Marquez could ride, they were going to redesign the bike so that ALL the Honda riders would feel better about riding it and would be able to fight for wins on it.

So, how has that worked out, Mr Honda? Marc is about 99% fit, is still capable of marvellous things on the bike and is still relatively young. Ignore the armchair “experts” who say that he is past it, or that he’s too old. He isn’t even THIRTY yet, for God’s sake. Given a halfway decent bike he is still more than a match for any of the other riders in the category and none of them are going to match his career record no matter how long they choose to ride.

It is significant to point out that, regardless of whatever adversity has befallen him, either large or small, Marquez has consistently NEVER blamed the bike or the team. He finds a diplomatic way of excusing the failure and keeps smiling as he always has. So it must be particularly galling for him to be handed a dud of a bike and be expected to perform miracles on it when it is plainly inferior to the other bikes in the category.

So, let’s look at this “rider friendly” bike that he is being forced to ride this year. Clearly, not only is it NOT a bike that the other Honda riders can contend for podiums on (I’ll get back to this in a moment) but it is a bike that even their BEST rider can’t get to the top three steps. Despite hiring Espargaro who was going to be the next big thing, Honda’s fortunes are languishing in the bottom quarter of the table and show no sign of being lifted out of there.

AND, if you look at the stats, all FOUR of Honda’s riders got better results with last year’s bike than they have garnered this year so far DESPITE the 2021 bike supposedly being a too difficult bike to understand and ride. Again, how do you figure that, Mr Honda?

What is really frustrating is that this isn’t the first time that Honda have shot themselves in the foot. They cost Wayne Gardner a successful championship defence in 1988 by experimenting with a radical redesign of a successful bike; you’d think they would have learned but, evidently not.

In the Practice sessions at Le Mans they tried a completely different setup with a bike that was both longer and lower than the normal spec, hoping that they might hit the spot and turn the sow’s ear into a silk purse. It was a total failure and Marc reverted to the current spec for the race. Plainly they have no idea and are simply grasping at straws.

What is the answer? Simple. Clean out the engineering shop, sack them all and go back to the 2021 bike for the rest of the season until a new bike that actually works can be designed and tested. It’s already too late for 2022 but let’s at least do SOMETHING to avoid the embarrassment that HRC is foisting on us and their patient and perplexed riders for the rest of the season.

I’ll say it again, last year the three other Honda riders got better results on the 2021 bike than they are getting now on the supposedly better bike and Marquez won THREE races. It’s simple, innit?

Wake up, Mr Honda, you’ve dropped the ball. Get your act together.