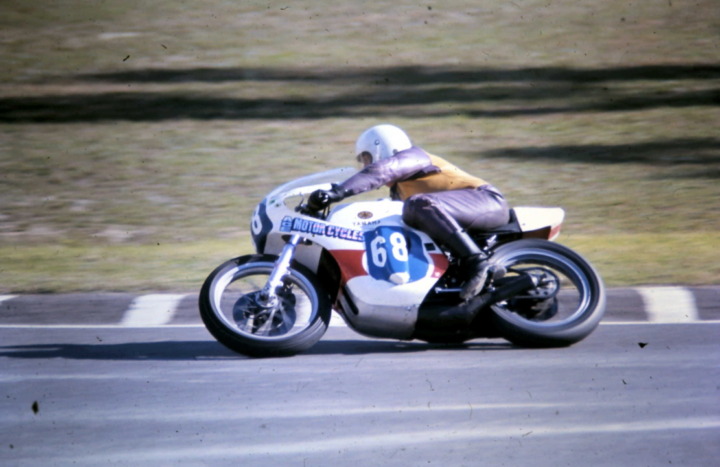 Looking for an interesting shot to post up in one of my favourite Facebook groups, I came across this one. I’ve seen it before, of course, it’s one of my collection and it is (obviously) from Amaroo Park, Stop Corner. The rider is Gary Thomas and the bike is a TZ350D Yamaha.

But every photo is interesting for one reason or another and this one certainly is. Of interest is the bulge in the side of the fairing that is certainly not standard. I recall that, at the time, there was talk that Gary was experimenting with a fuel injection setup of some sort but my memory says that it didn’t really go anywhere and the passage of time hasn’t helped shed any more light on it (not that I asked at the time or have asked since).

Anyway, I posted the picture and noted my vague recollection and asked if anyone had more details. Well, it had hardly been posted when there were responses, some from members of Gary’s family and some from people who were involved in the project. Goes to show what you get it you ask nicely. The conversation quickly led to a Private Message and a subsequent long telephone conversation with the man himself.

First, though, a little bit of background. In the mid-to-late 70s, if you wanted a bike to get the job done, you bought a TZ350, it really was that simple. For a comparatively modest $A3000 (approx $A12500 in today’s coin) you could have a bike that would enable you to contest any sort of road races all the way from Club Days to Australian Championships and contest three separate classes at these meetings. Assuming you were a half-way decent rider you had a good podium chance in the 350cc (Junior) class, a top 5 chance in the 500cc (Senior) class and a top 10 chance in the Unlimited class (up to 1100cc).

Unsurprisingly, fields were filled with TZs and the competition was fierce so every rider was looking for an edge that would make HIS TZ a bit better than the other bloke’s TZ. But there wasn’t really that much you COULD do; fact was that the TZ was pretty much as good as it could be right out of the box. Knowing that fact, however, didn’t stop many innovative and enthusiastic riders from trying to improve on the basic package. One such innovator was the aforementioned Gary Thomas, a former winner of the Chesterfield Superbike Series on the eye-watering Kawasaki 750cc triple and a noted hard man of the sport even in the day when it was littered with tough guys.

So here is the distillation of our conversation, a story which I have entitled “Innovation” I hope you enjoy it.

Gary admitted right from the outset that he wasn’t a mechanic, he left the wrenching to his close-knit crew, but he did have some ideas that might give him the edge and one of these centred around the idea of ditching the TZ’s carburettors and running a fuel injection system instead. There was no such thing as electronic fuel injection in the day but mechanical fuel injection, where the injector setup was run off the moving components of the engine was well established. It had been the German Messchersmitt 109’s fuel injection system that had given it the advantage over the Spitfires and Hurricanes during the Battle of Britain in WWII. The 109 could fly upside down in a dogfight and the engine would keep running. The British Rolls Royce Merlin engine in the Spitfire and the Hurricane had carburettors and the motor would quickly starve for fuel and cut out if run for too long upside down.

And, of course, mechanical fuel injection was already well-established in car racing as well. Locally, the McGee organisation, had developed their own mechanical injection system since overseas components were so expensive and they had provided their gear to several teams running speedcars (they were called “midgets” back then) in local speedway (dirt track car racing) 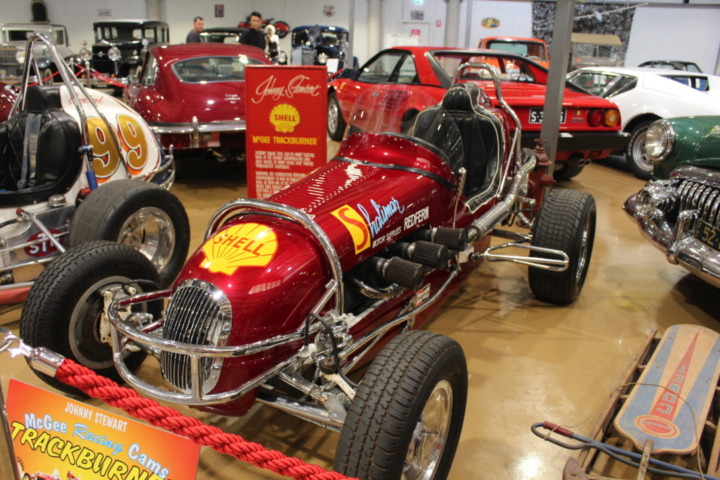 And here is a close-up of the Holden “grey” motor, fitted with a McGee fuel injection setup. 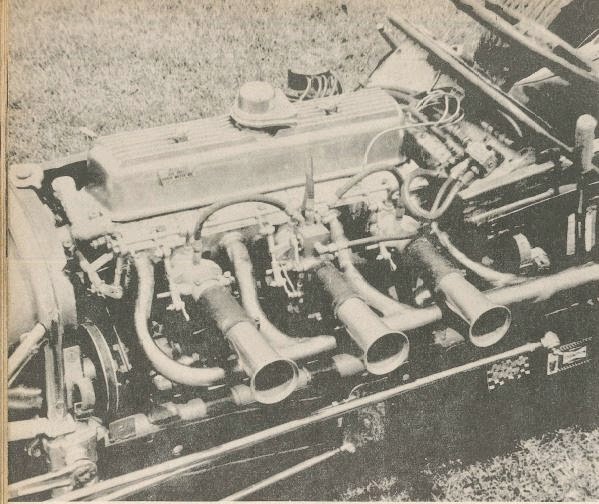 Bearing in mind that these cars date from the 1960s it shows just how advanced and innovative our local racing was.

So Gary believed that their team could adapt this system to a Yamaha TZ350 motor. A McGee unit was purchased (along with the promise of on-going technical assistance – which was not really forthcoming) and the boys put a motor up on the bench and set to work. Despite the fact that this is telegraphing the punch somewhat, it was the ferocious expense of buying, adapting and trying to make the thing run that led to its abandonment in the end.

The motor was set up so that the fuel injection pump ran off the crankshaft of the TZ engine, on its left hand side thus explaining the “bulge” in the left side of the fairing. The first attempt to make the system work resulted in the destruction of the barrels on the engine and changes were made before a new set of barrels were fitted and Take 2 took place. The results were a slight improvement but the barrels again were pretty quickly destroyed and, by the time this had happened twice, the bottom end of the engine was also toast.

Gary was already having gave doubts about the project but, having come this far and spent this much money, it was felt that they had to continue and try and justify the outlay. They finally got the engine to run for an extended period of time so it was fitted back into the chassis and the bike was taken to Amaroo Park for a shakedown run. And it was at this meeting where I took the photo above and it was a good thing that I did because it never ran again after that day.

While the idea seemed to have merit, it fell at the hurdle of mixture and bandwidth. Yes, the motor ran, but it only made any useful power when it was running at ridiculously high revs and, as soon as the rider cut the power to change to the next gear, the motor would die and then gradually start revving up to the range where it was making the sort of power that it needed to be making again. As Gary said, “Testing it at Amaroo was probably the worst thing we could have done, all the gear changing that you needed to get it around Amaroo just highlighted the shortcomings of the concept. Now, if we’d have been able to test it at Bathurst, for example, we could have gotten a better handle on it.” But Bathurst was a closed public road circuit and it wasn’t available for private testing of race bikes.

It is my feeling (and I shared this with Gary) that, had McGees provided more technical feedback, Gary would have realised that the system simply wasn’t going to work on a race bike right from the start. It worked brilliantly in speedway where the midgets were running at near-top revs all race long and not having to change gear at ALL (no gearbox, direct drive from engine to diff, cars were push-started till the motor fired and got up to operating revs)

The injection system was removed, the carbs re-instated and Gary and the crew set out to make it a competitive race bike. The fitted slightly wider rims which was unusual but provided better traction and road-holding and they returned the motor to stock condition with the exception of tearing it down, blue-printing and polishing the internals. It ran even better than it would have done “out of the box” but the project had absorbed much more budget than Gary had ever intended and the bike became a constant reminder to him of what he perceived as a failure on his part.

“I kept the injection unit and some other bits under the house for years after and I was going to mount it on a wooden stand and make it a display piece but, in the end, I just couldn’t stand looking at it so I put it all in the bin and took it to the tip. I didn’t really want to be reminded of what a clown I’d been.”

At this point I objected strongly. I reminded Gary that the sport always needs its innovators and that, sometimes, those innovations succeed and sometimes they didn’t. I reminded him that, rather than feel silly about it he should feel proud that he had done something that nobody else had been game enough to do.

“It’s funny,” he went on, “But when we put the bike back to stock it ran brilliantly. I used to see blokes porting and polishing and adjusting squish and mixture and stuff and then finding out that their bike was slower.” I can certainly attest to how often I saw that happen.

He also noted that the quality of fuel available back then was patchy at best and that he only ever used BP from his local servo because it delivered the best results. These days, with the sophisticated fuels now available this is not an issue.

So, a story of Aussie innovation. Sadly, this one did NOT work but, Gary and his crew gave it the good old Aussie try and, in the end, you can’t ask for any more than that. Thanks for reading.

PS: An email from Gary notes that the Amaroo Park programme from 31-7-77 records that this bike (in carburettorred form) held the Outright and Junior Lap Record at 55.4 seconds.