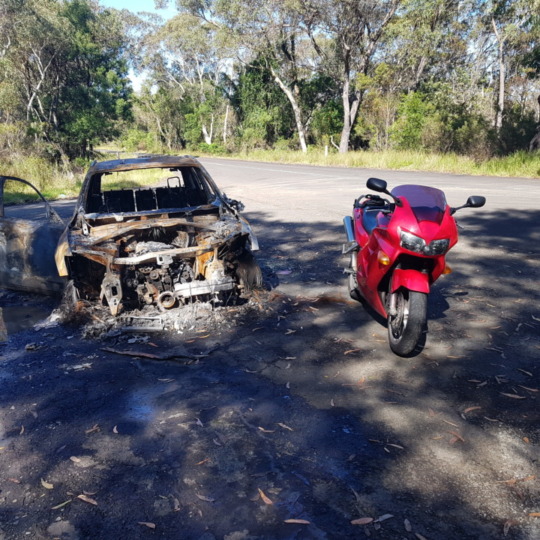 The unseasonably warm weather continues so it makes sense to continue riding. After our traditional Friday breakfast at Passionate Palate, Helena departed for her quilting class and I suited up for a ride. As already mentioned, options are a little restricted at the moment. The RTA is saying that Macquarie Pass will be re-opened in late May but, judging from the picture they have published, I’d reckon that is VERY optimistic.

I decided to try the highlands even though it meant that I would have to traverse Jamberoo Pass at least once. It’s funny that the same people who complain about Macquarie Pass complain even louder about the Jamberoo option. To an extent they are right. Jamberoo is twistier, much narrower and a much more difficult ride at the moment given that it is carrying all the traffic that would normally be taking Macquarie Pass.

However, the surface is good and the ride a much more picturesque one than the alternative especially once you reach the top. I was always taught to take the road as it comes so I have driven/ridden Jamberoo since I was learning to drive in Barbara Richards’s Mini Minor in 1967 when the road was all gravel.

But I kept back that “privilege” till later in the day, opting for a run out to the Burrogorang Lookout at Nattai, with a spectacular view over the valley that contains the headwaters of the Warragamba Dam.

So it was up Mt Keira (no stop/go lady this time) and out onto the Picton Road and head west.

I stopped just before I got to the highway and took a couple of photos of this wreck. This spot is a favourite of the “steal, joyride then burn” brigade and it was a little lesson on just how much heat is generated by a car fire. The mag wheels are melted as are the tyres (the wire carcass still remains). There was nothing to indicate what car it had been and the fact that it was front-engined, rear-wheel drive made it even more perplexing. Incidentally, despite the ferocity of the fire, you can see that the timing belt on the front of the engine is intact, very weird. Answers on a postcard if you can identify the make and model. 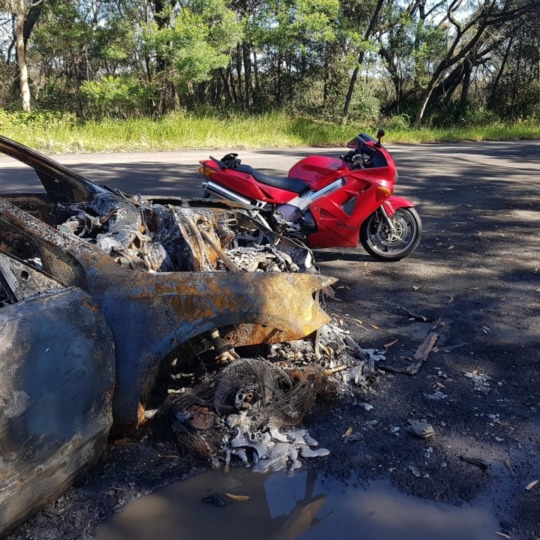 The forecast said fine but cool so I wore my Winter jacket but opted to keep my new summer gloves. Along the tops the temperature was 13 degrees but the gloves were absolutely fine. Pit stop at Picton and onto the road that leads to my usual backroads to Penrith. But I didn’t take the Montpellier Drive turnoff, continuing straight on towards Nattai.

My brother drove the Oaks road the other day and said it is really badly cut up by the rain with an extended period of roadworks being required to rehabilitate it.

The road out to the lookout is a perfect example of bureaucratic stupidity. In spite of it winding through small villages and having farms and properties on both sides and numerous side-roads (including a couple of major intersections) the road is two lanes (one in each direction), narrow and winding and the speed limit is set at 100kmh. Now I have no problem doing that but it does make you wonder why it is so when some major roads in the area are 4 lane, divided by a jersey strip, have wide verges and plenty of visibility no side-roads yet the speed limit is set at 90km/h.

The road to Nattai is a delight. It is relatively undamaged by the recent rains and is filled with sweeping corners and elevation changes. All too soon I arrived at the turn-off (which is right at the lookout) to find the gate locked and signs promising dire punishments for those who tried to go past them to the lookout. Well, it seems to me that, if the lookout was going to be closed, a sign indicating such SHOULD have been posted way back down the road at the first town you come to. Nevertheless, I had a great, traffic-free blast along a great road in beautiful weather so the fact that I didn’t get to the lookout was a minor inconvenience.

I turned around and retraced my steps, noting first a police motorcycle and then, not long after, a police Highway Patrol car neither of whose occupants gave me even a second glance.

As you know, I travel the Picton/Montpellier stretch often and, every time I do, I think, “You know, I should stop at Mowbray Park and say hello to Blair.” Of course, I never do, but today I had the time so I swung in the gate just near the intersection and tootled down a little farmhouse lane until I reached the car park.

I should explain that Blair and his good wife are Facebook friends of mine and they run a farmstay business in an old 19th century estate just off the main road. Blair is also a keen historic road racer so we have more than just colonial history and architecture as common interests.

Their home is a glorious old 1860’s building with a dozen or so out-buildings which form the main part of his business. Fortunately for me Blair and Jacquie were both home so I got the guided tour, first of the garage/workshop (of course) and then of the main house while one of Blair’s employees boiled the jug for a cuppa.

Mowbray Park has served at various time in its life, as a convalescent hospital for wounded officers after World War 1, an executive retreat for guests of the BHP and, of course, as a working farm. Covering over 1000 acres, it is a BIG property, set in rolling green hills. At various times it has been the holiday house of notable people such as Sir Henry Parkes and it retains much of its original patina, the present owners resisting the temptation to modernise it to suit the current taste. Indeed, walking into the “big house” is like walking back in time; the walls are lined with period photographs and paintings pertaining to the building’s history and the furniture pieces, many huge and imposing, reflect the taste of the eras through which the building has passed. 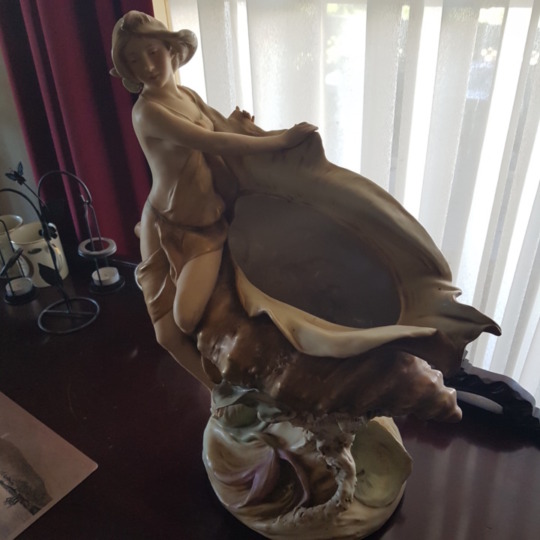 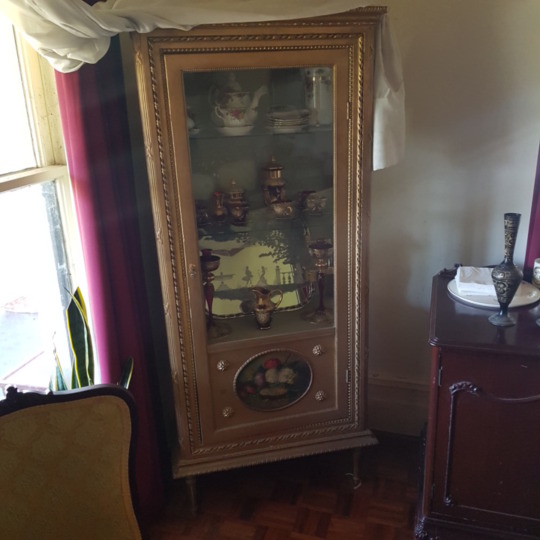 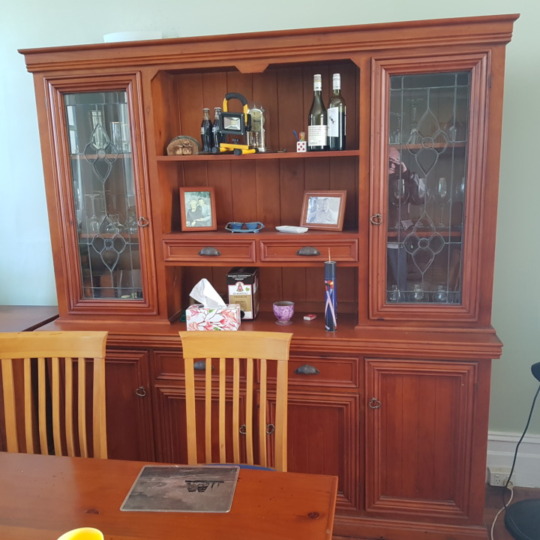 I also loved this display on a side table. 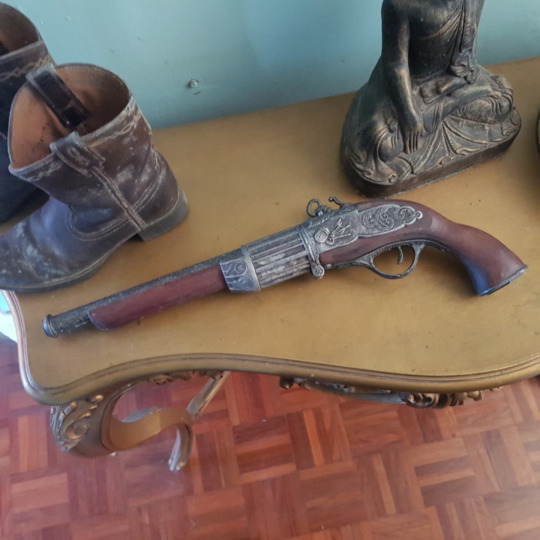 The staircase to the second floor where the 9 bedrooms (all with en-suites) are located  is suitably grand as well. 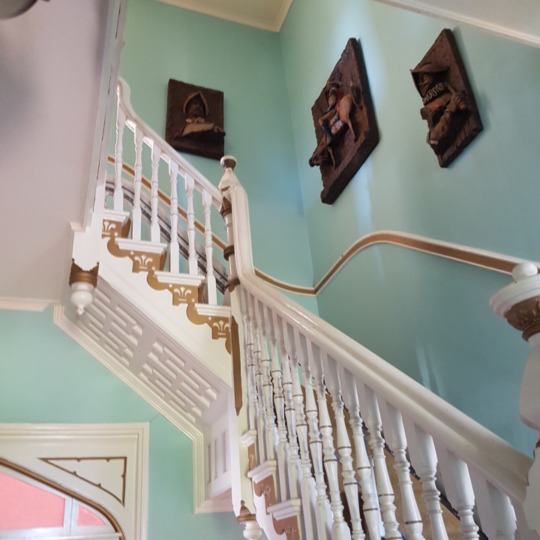 But the piece-de-resistance for me was the games room and this astonishing full-sized billiard table. Built by the Imperial billiard table company in London and shipped out here last century, it weighs well over a ton with the slate weighing over half a ton by itself! The foundations under the games room floor had to be specially strengthened before the table could be installed. 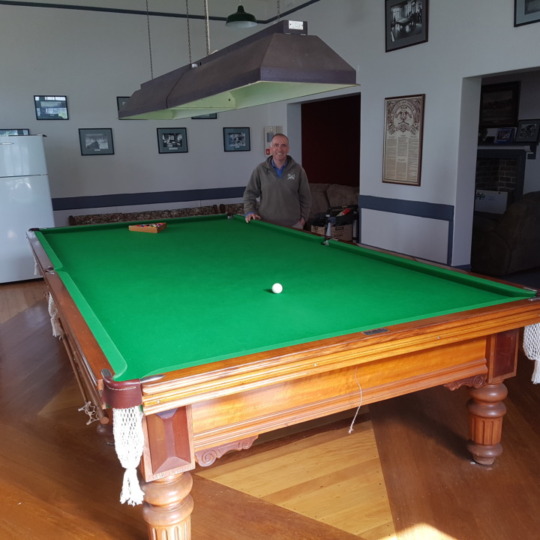 I know my good mate, Paul (Spooky) Borg will be especially interested in this!

After spending much longer than I should have talking family histories, colonial architecture and motorcycling, I headed off having enjoyed a cuppa and a shortbread bikkie as well (as you do).

The day was still young so, instead of just heading down Picton Road, I gassed up and took the long way home, down through Tahmoor, Bargo and then Yanderra and Yerrinbool. Riding along that road I reflected on the time, not that long ago, when it had been the Hume Highway, the main road from Sydney to Melbourne.

I turned off onto the Old South Road realising far too late, that this was likely to bring me onto some pretty rough patches (OSR is notably bumpy at any time). I was certainly right, the road is in very poor shape after the rains. By now I had also realised that my chosen route home held an even more diabolical road to negotiate, the infamous Range Road. The little backroad is always dodgy, single lane and infested with entitled landed gentry in their Range Rovers driving down the middle of the road. It was even rougher than I had anticipated though, fortunately there was no traffic so I was able to pootle along in 2nd and try and dodge the worst of the tank traps.

Out onto the Tourist Road complete with big signs warning me that Macquarie Pass was closed, I bimbled along, again no traffic, cut right onto the road to Robertson through East Kangaloon and finally, as well-deserved stop at the Pie Shop. A hot chocolate and a lamington before I steeled myself for the dive down Jamberoo. 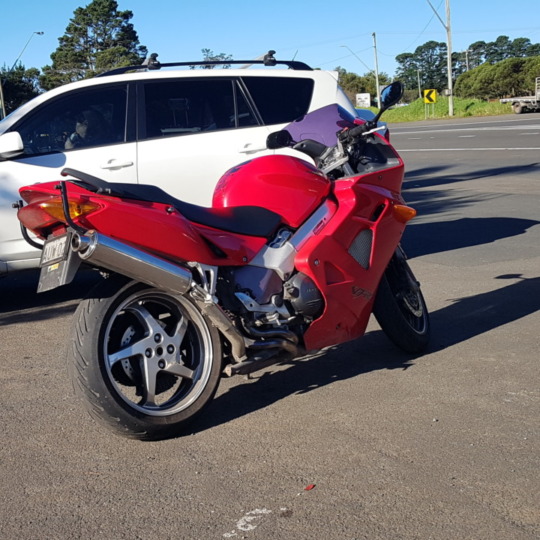 I got a great run until about 2/3 the way down. The surface is great considering the pounding it is taking at the moment with all the extra traffic and everybody seems to be taking it easy and doing the right thing, very pleasing.

Home about 1600 after having covered about 220kms. As usual, Rhonnda took it all in her stride and emphasised yet again, what a brilliant design of motorcycle it is. She turns 24 later this year, you’d never know it.

I may have missed the lookout but it was a great day on the road anyway.

If you’d like to find out more about farmstays at Mowbray Park, here’s the url.

And here’s what you’ll see when you get there.

As always, thanks for reading.