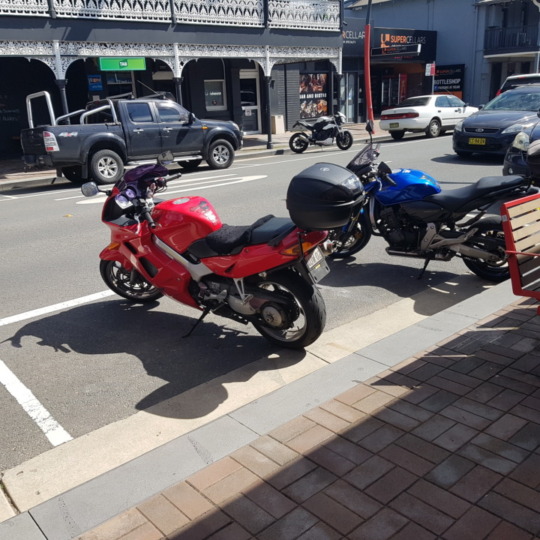 It was an early start on Monday after an excellent sleep on a comfortable bed with great pillows. I know I bang on about this but, if you are going to be covering considerable distances day after day, you must get good rest.

I took three wrong turns just getting out of Port; it was still dark and that, and the street lights, created a very different streetscape than what I was used to. We had the pensioner’s brekkie at Maccas at the roundabout before heading south.

The idea was that we would head across to Singleton and take advantage of what we hoped to be a quiet day on the Putty. That meant several choices, none of which had us excited. Going back up to Walcha and then down Thunderbolts seemed like Sydney to Melbourne via Darwin so that was out. That meant that we were going to have to do at least SOME time on the freeway heading south till we could cut inland.

The first choice was the Krambach road from Nabiac but we’d done that one not long ago and it’s pretty ordinary. So, we’d have to look further south. I know it’s not twisty but, when you have to make time, booming along the freeway at 110 certainly helps you to cover ground.

Once we were south of Nabiac my intention was always that we’d revisit the old Pacific Highway along what is now known as Wootton Way. O’Halloran’s Gap has always been my favourite even back when it WAS the highway and had TWO speed cameras on it. Our radar was working well and Paul tucked in behind as we drifted into the right hand lane at the turn-off.

The Gap didn’t disappoint and we monstered the deserted stretch of mountain pass, pausing for the obligatory photo before cruising in to Buladelah for a pit stop at the local Shell. 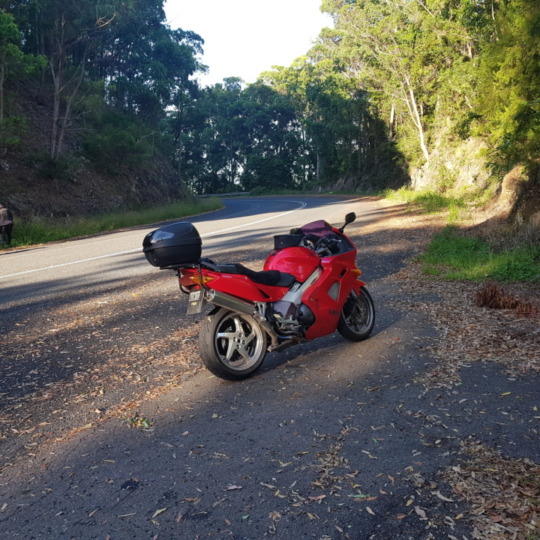 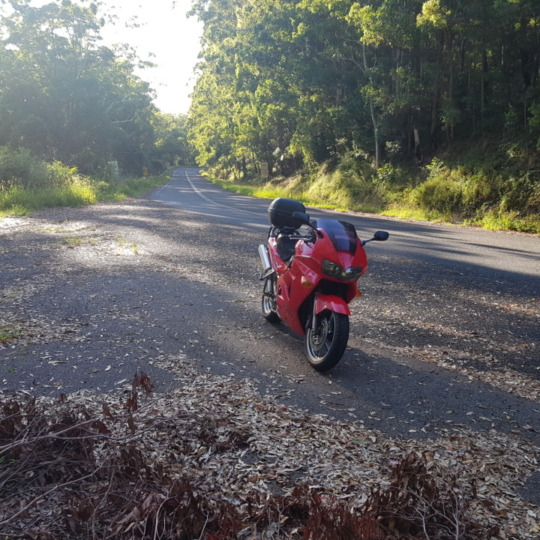 Asking the locals is always a wise move so we asked the lady on the console if we could get across to Singleton from here and she pointed us to the Booral/Stroud road that exited just south of the town. She assured us that it was tar, in pretty good condition and very twisty, how could we not?

The only issue I had was that I wasn’t sure if Paul realised that this road was going to bring us back (eventually) onto that appalling section of road between Dungog and Gresford. But, we pressed on and, damn, the lady at the servo was right. It WAS tarred, it WAS twisty and it DID bring us out on the Stroud road. But what a cracker of a road it was, it was like a mini-Oxley with dozens of turns, elevation changes galore and no traffic. Highly recommended.

We stuck to the plan, gritted what was left of our teeth and pushed on to Gresford where we were hoping to stop for brekkie at the café. Unfortunately, due to COVID, the place was closed and won’t be open for business again for another month at least.

So, with grumbling tummies, we pushed on to Singleton where we found a lovely café with a table and two chairs on the footpath and we ordered some nibblies.

Those of my readers who ride will be aware of the “old bloke” syndrome. The tendency (nay, CERTAINTY) that, whenever you stop, some old gentleman will accost you and start telling you tales of when he was a young man who rode a bike. Some of my friends are a bit intolerant of this syndrome, but I love it; perhaps it’s the historian in me. We hadn’t been seated for more than five minutes when a car pulled up and an old gentleman got out.

In a town where the general attire is shorts, a hi-vis jacket and Blundstone steel toe cap boots, this old gent certainly stood out. He was immaculately dressed in a black suit, white shirt and tie and highly polished black leather shoes. We exchanged pleasantries and he admired the bikes. 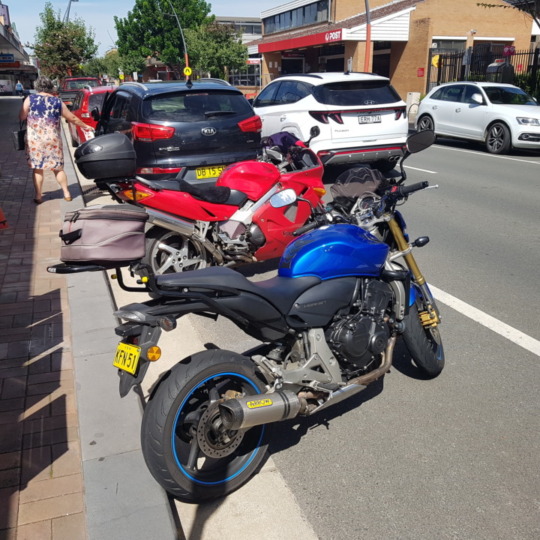 “I used to ride myself, you know,” he began, “In fact, in the early 80’s I ordered an R80 BMW from the factory in Germany. I had it prepared to suit Australian regulations and I went to Germany and picked it up from the factory. I rode it around Europe for several months and then I brought it home.”

Apparently, he kept the bike for many years until increasing age forced him to sell it (I reckon he was well into his 80s’). And there, on the footpath, in a little country town, my storehouse of amazing motorcycling anecdotes received a new entry. And the suit? Well, Paul and I figured that he had just attended a funeral or that he was member of the Lodge that was further up the street and he was returning from a meeting there. In any event, he certainly made my day.

While we were getting ready to go Paul noted that his rear tyre was looking a bit marginal I agreed but it certainly looked capable of getting him home so we set out, heading south and homewards.

Again, we had an astonishing run through the Ten Mile with Paul letting me lead most of the way. Prior to that I had been putting some Oxley lessons into practice and was very satisfied that I was more than holding my own with his little blue Honda. Once past I streaked away and it was only when we got near the end that it occurred to me that it wasn’t riding skill that was responsible for my amazing performance but just the fact that he was “nursing” his rear tyre. Oh, well, it was good while it lasted. It’s funny but, once you become aware that something isn’t quite right, it preys on your mind until you rectify it.

At GGC we stopped even though it was closed. Kimmie had told us ages ago that, even if they were closed, we should drop in and she’d make us a pot of tea, so we always do and she does. Will explained the new signs around telling people that it’s private property and that they are not entitled to dump their household garbage in GGC’s bins. It is increasingly being a problem that locals are doing so. I think I’d employ a Doberman if it was me. While we were there three cars stopped and the occupants walked under the “Closed” banner and walked up the stairs into the shop and demanded to know why they weren’t going to be served. The arrogance and entitledness of some people never ceases to amaze me. They WEREN’T served and went back to their cars looking grumpy but, you know what? Kimmie doesn’t need that sort of customer anyway.

No traffic between GGC and Colo Heights where we stopped for a pit stop and chewed the fat with a nice young bloke who was giving his new Ninja 650 a gallop. Nice bike. Apparently there was going to be a group ride but the others cried off because it was going to rain. Mitch took the punt and had a great solo run to Colo Heights and back to his home in Blacktown in the dry!

Nevertheless, the skies to the east were looking increasingly gloomy and we weren’t surprised to run into the rain just after our final fuel stop at Silverdale. Again, we took the punt that, being this close to home (less than 100kms) we’d “wing” it. Conscious of the fact that Paul’s rear tyre would be providing less than optimal grip, we tippy-toed home pulling in around 1730, only slightly damp but glad to be home and out of the rain. A hot shower and some dry clothes and all was right with the world.

1450kms for the whole trip and I’m not even game to look at how much money we spent on fuel. But the costs were more than outweighed by the sheer enjoyment of touring. My shoulder stood up to the trip reasonably well and the pain killers certainly helped there. Once again the fact that Paul and I are brothers and have toured together for so many years made it way easier than it would have been. We regularly swap the lead to give the other rider a break from looking at the back of your bike and also to allow a visual inspection of the bikes to ensure that all is well. Paul’s radar about when my leg (it still troubles me on long runs) is in need of a rest continues to work well and the whole thing functions like a well-oiled machine (I must check my oil, too)

There really isn’t much that can beat motorcycle touring, thanks for reading.