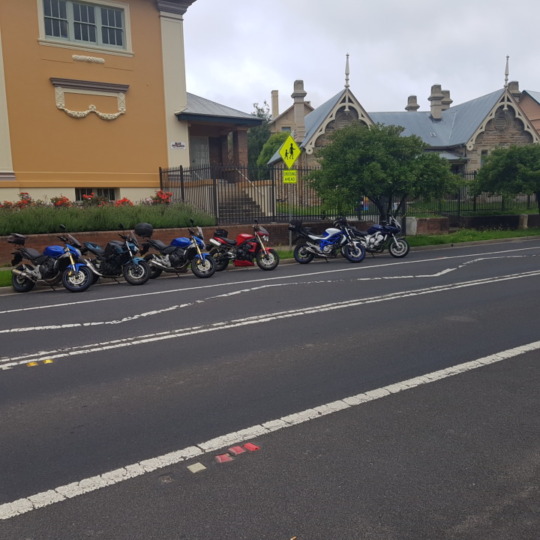 Girls-only motorcycle groups are popping up all over the place these days. The rationale seems to be that the girls can get together, ride and have fun and not be intimidated by testosterone-inflamed males who will not allow them to enjoy their riding. I think the whole thing is bollocks myself; the best way to learn to ride well is to expose yourself to as many different riders as you can and learn from them. But, anyway, I’m sure they enjoy what they do and the main thing is that they DO ride and the DO enjoy themselves.

Several of my female friends in the group I inhabit are members of the hilariously-named BOOBS motorcycle club. It’s not to hard to see how they got their name and it is always the subject of much hilarity. BOOBS (Babes Out On Bikes) is a very active group and, while their activities have been somewhat limited by the virus (as has everyone else’s) the fact is that they ride and they ride often.

A week or so ago one of the members asked me for some help. They were planning a Bells Line of Road ride and she asked if I could assist with a reconnoitre of the route since she hadn’t done it before. The leader of the group who DID know the way, will be unable to attend since she is in the advanced stages of pregnancy so it was going to fall to Margie to be the ride organiser/leader.

Would I be happy to help? Would I like to go for a Bells ride and show her the tips and tricks? Hell, yes. And, in the normal course of events, this ride grew from being a recconoitre to being a full-blown ride. Six starters in all including two more lady riders, my brother and I and one of the lady riders husbands (of which more later). As varied as the personnel was, the machinery was less so. 5 out of the 6 bikes were all middleweights, 3 x 600s, 1 X 675, and 1 x 650, The odd one out was Julz’s Ninja 400 which also meant that the ride was going to be a speed-limited one as she isn’t off her “Ps” yet. And, as you can see from the photo above, taken at our lunch stop in Lithgow, there was a startling unanimity in bike colour as well.

Early start because it was going to be a long day, we set out at 7 with the escarpment shrouded in fog, a bit worrying. Funnily enough, though, it stayed fine and fog-free for the first leg, Wollongong to Richmond. Though the road was wet in places courtesy of a lot of overnight rain, we made it to our first fuel stop with just a few “moments” on slippery old tar surfaces.

But, by the time we’d had a break and refuelled, the clouds came in and it started to sprinkle. Not rain, just enough damp to be off-putting and casting up thoughts of, “Should we stop and out our “wets” on?” The group got broken up a bit because of one thing and another but was back together by Bilpin where we stopped and posed the question again. The rain wasn’t getting worse and there were dry patches so we voted to press on.

The Bells, despite the draconian 60km/h speed limit, is still a wonderful road and, once clear of Mt Tomah, the limit was raised and so was the fun factor. The bushland is slowly recovering from the devastating 2020 bushfires and the view from the tops of the ridges is spectacular as always. The rain had stopped so we pressed on, somewhat hampered by a couple of wood ducks in 4WD utes, and pulled into Lithgow where it had evidently been dry for some time. A refreshing break and we were on the way again. Margie was ride leader and was following a combination of my directions and her GPS but we soon found a perfect illustration of why you shouldn’t always trust the technology.

Before we set out from Lithgow, I told Margie that the turn-off towards Oberon was on the right after you got out of town. Believing the GPS and remembering what I had said, Margie suddenly peeled right and pulled up at the start of what looked like a very minor road. Now I am sure that this little track WOULD have gotten us to Oberon in the end but it WASN’T the road we were supposed to be on. We stopped the group, turned around and headed back out onto the GWH.

About 10kms further on we turned onto the correct road to Oberon and so onto one of the most enjoyable roads in NSW. If you haven’t ridden the road from the highway to Oberon, you MUST, it is just fantastic. Because of the aforementioned GPS snafu, I was in the lead and I maintained it all the way, down to the Cox’s River and then up the other side through this amazing switchback of sweeping corners, rises and falls. Yes, I know, I rave about this road, but it’s worth it. The road was dry and, apart from a wait for significant roadworks part the way through, we had a brilliant run all the way.

Fuel stop at Oberon (a few of us only have small tanks) and then it was into the 140km stretch to Goulburn. Fast, wide open corners and long straights characterise this section, interspersed by the treacherous dive down onto the Abercrombie River and the scramble up the other side over very patchy bitumen; keeps you focussed, it certainly does.

By Taralga we needed a break but all the local cafes we closed. Then we saw a coffee van parked up in someone’s front yard. The two enterprising ladies had brought it from down the coast when they realised that there weren’t any facilities in town and they were, by all reports, doing a booming trade, good on them.

Again, just like clockwork, while we were stopped, it started to rain again. There was a large garden umbrella over an outdoor setting so we crowded under it until the worst of it was over and then we set out again. Not long after it stopped and it got quite hot as we broke out into the sunshine. Last fuel stop at Goulburn and it WAS warm; park and stay in the shade.

We took the backroad from Maulan down through Tallong and Wingello, stopped for a final break at Fitzroy Falls and then struck out for the last half an hour. It was a good thing we took that break. At the eastern end of Robertson we ran into the thickest pea-soup fog I have ever experienced on the highlands and I have been driving/riding there since the mid-60s. Wow, it was huge. Allan was in front and doing a spectacular job navigating the road by memory alone in the total absence of visual clues. At the overtaking section just after the 2nd hairpin he pulled over and waved me past; I was more than happy to go point for a while and give him a break. It was only after I got home that I realised that the bike has hazard flashers; I’ve never had them on a bike before so I completely overlooked the fact that they were there!

I was always counting on the fact that we would drop OUT of the cloud cover, such is the nature of the escarpment so I was delighted when, a few corners after getting into the lead, the fog cleared and I had an unimpeded run down the rest of the Pass. The road was still damp and sketchy so there were no heroics but it was great to get to the bottom without having to sort traffic.

From there it was regroup, say our farewells and skulk for home. I got home just after 6 so it was an 11 hour day, 580kms covered for the day and, as Wendy said, SEVEN seasons in the day.

I took the Hornet yesterday, as you can see from the photos. I’ve never done a long distance run on it at all so I was anxious to see what it would be like. The VFR is sparkling clean and I didn’t want to get it dirty as well. Good thing I made THAT choice because the Hornet is now putrid. The ride has actually asked more questions than it answered, however. The bike is fast enough, very nimble in the corners and slightly more comfortable than the VFR (more upright ergonomics). However, it is “buzzy” (5500RPM at 100km/h; hardly relaxing) and the gearbox is not as smooth as the VFR. In an ideal world, I’d keep them both, more feasible than you’d think since one bike is going onto pensioner rego this year which means that all I’d have to pay is green slip for it; it’s financially doable. But, as Helena said, the cost of maintenance, servicing of two bikes etc is still a factor so a bit more thought is still required.

Allan and Wendy haven’t been on a ride with us for years, though Wendy is a keen supporter of the BOOBS rides. Allan, however, put up the grand total of 400kms last year on his Street Triple. Yesterday he more than exceeded that in one day. I was hugely impressed by both of them taking on a big ride in less than ideal conditions, respect.

Julz more than held up her end of the deal on her little 400. She has done 9000kms since she got her P plates last January so she has basically lived on the Ninja. It shows, her riding is excellent, I wonder how she’ll go on a bigger bike?

Rest day today, obviously. I’ll catch you next time. Thanks, Margie, for the invite. 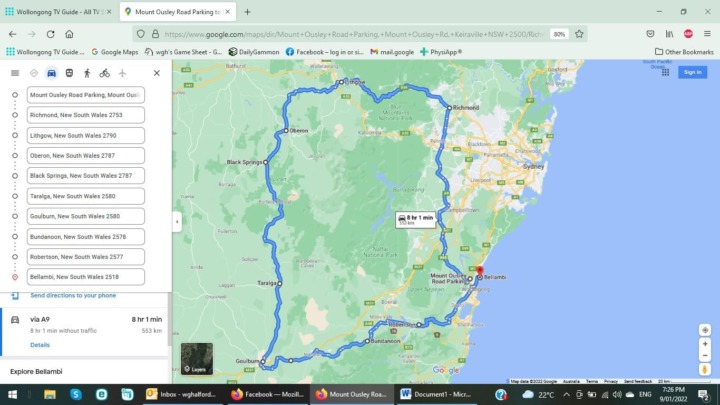 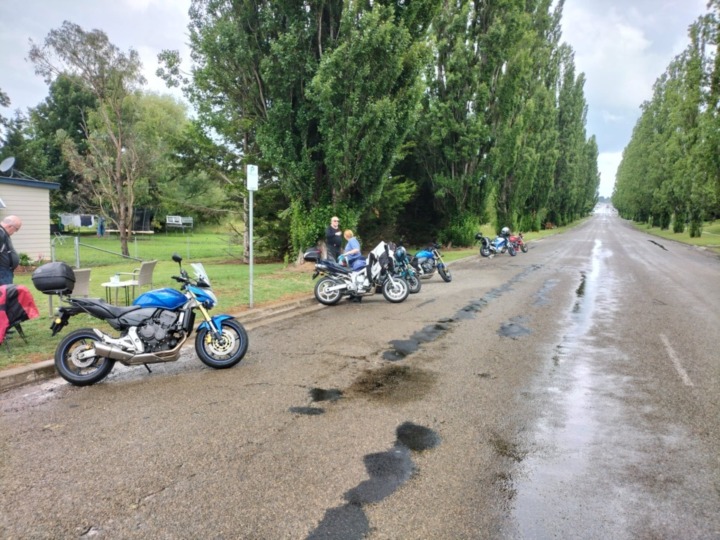 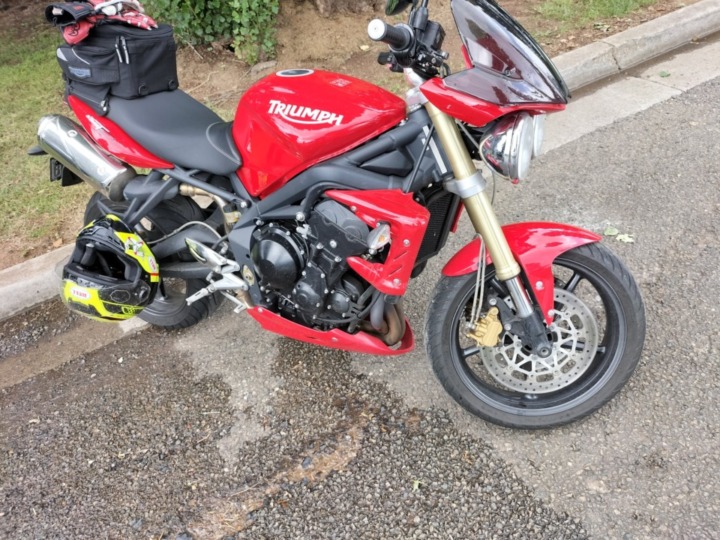 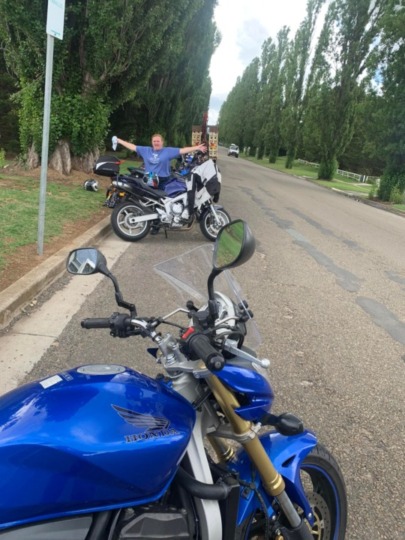 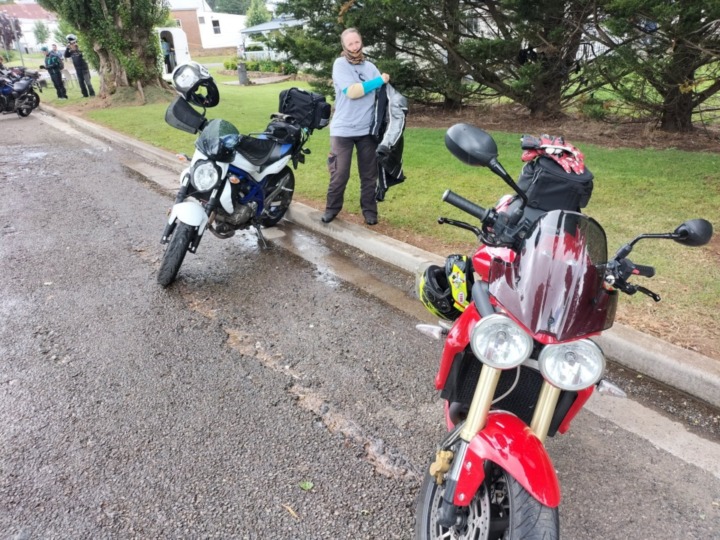