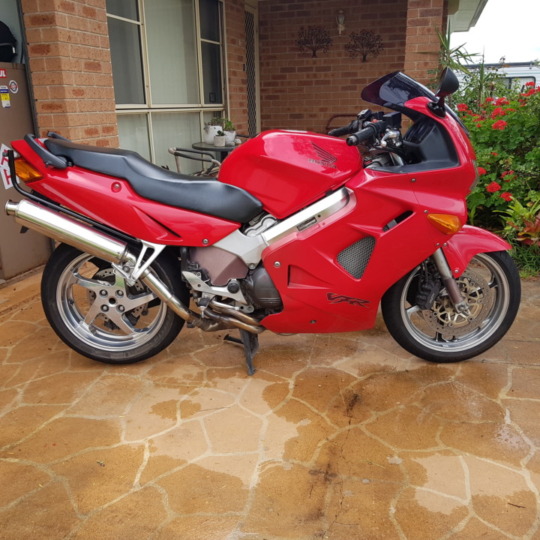 It occurred to me the other day that it’s been some time since I gave Rhonnda a tubby. After the solo Putty run a few weeks ago, the last half of which was completed in the rain and then the group ride the other day as well as other assorted running around, she was looking pretty grubby.

So, it was out with the cleaning gear and into it. Brother, she was a LOT dirtier than what I thought, especially once I started looking closely. Then I tried to remember when I had last washed her and I couldn’t think of any time since before my accident last February. Could it have been that long? Surely not. I certainly hope that it isn’t true but it could be.

One thing was certain, she was a mess. Rain stains all along the bottom halves of the fairing, the exhaust headers were likewise putrid and the wheels, don’t even START me on the wheels. One of the many things that had attracted me to her at the start (some 4 years ago, actually) was the chromed wheels, I thought (and still think) that they look awesome. I had some know-nothing social media-ite tell someone else not to get their bike wheels chromed because it added weight, yes, really. On a 200+kg sports tourer a few grams here or there is NOT going to make any difference and the sparkle that the chromed wheels add to the otherwise matt-finished mag wheels is well and truly worth it, in my opinion.

The bodywork was reasonable (Honda paint stands up remarkably to neglect) but the tail-piece had numerous black marks from where my boots had contacted it in the process of getting on and off. A legacy of my game leg, I am afraid.

The instrument panel was water-spattered and the chain guard and other gubbins were also showing signs of the bike having been ridden in less-than-ideal conditions.

A gentle spray with the hose (despite the fact that Rhonnda has had all the electrical preventives done over the years, I still refuse to blast her with a hose) and then it was on to hand washing. Start at the top, work your way down, pausing to rinse off the suds and grime during the process. Some turps and a rag removed all the boot marks and also the baked-on streaks along the bottom right extremities of the fairing.

Then it was just a matter of thoroughly moving from front to back. There are, of course, areas on every bike where you simply cannot reach with a rag and soap but I have never been the sort of person (like some I know) who will tear the bike half in pieces to get to all the nooks and crannies. If I can reach, it gets cleaned, if I can’t it doesn’t.

After a final spray-off and a stand back and admire it was time to address the elephant in the room, the wheels. Now that the rest of the bike was clean they looked even worse. I am a very diligent user of chain lube, I refuse to spend hundreds of dollars on a new chain on a regular basis just because it’s a bit of a messy process to lube the chain. The downside of my diligence is that the rear wheel, the hub, the single sided swingarm and all associated bit within reach of chain lube fling-off become coated.

Incidentally, a word or two about lubing a chain (BMW owners can just talk among themselves for a couple of minutes here). 1. Always lube the chain when the chain is hot, as soon as practicable after you’ve finished riding. All the links are warm and the little spaces in between the moving parts are more amenable to the ingress of lubrication. 2. Don’t worry about lubing the outside of the chain, the lube will get flung off again as soon as you start moving. 3. Spray the lube on the INSIDE of the links while the chain is turning. Hold the can just i front of the rear sprocket and spray. (Oh, start the bike first, put it in 2nd gear and then begin the process). The lube will then work its was through the links from the inside rather than being just flung off. 4. Once you have done this to the inside links of the chain (nearest the wheel) do the same to the outside links of the chain. 5. Finally, a quick spray on the BACK of the chain as it is rotating just to provide lubrication to the sprockets. 6. Let the bike run for a minute or so to let the lube work its way in then shut down and cover the bike. You’ll be ready to ride next time. BMW riders may now resume reading, thank you for your cooperation.

My lack of cleaning meant that the wheels were incredibly coated with chain lube residue plus the gunk that had adhered to it. No amount of soap and water was going to move THAT (trust me, I tried). So, it was out with the pressure pack grease remover and the tedious process of cleaning, a few inches at a time, the stubborn caked-on grime. The rear hub, most of the SSS and chain guard as well had to be processed the same way until the shiny brightness of my chrome wheels began to emerge. Funnily enough, even though it is nowhere NEAR the chain, the front wheel would only come clean by use of the same process. It took longer to do the wheels than it took to do the whole of the rest of the bike.

Incidentally, it is becoming increasingly clear that modern chains really don’t need lubrication at all, at least the expensive spray it on from a can, type. Empirical tests have shown that modern chains lubricate themselves from within and that it is only friction on the sprockets and age that cause the “O” rings to deteriorate and allow mung into the moving parts. It seems that heavy duty engine oil, applied to the chain and the sprockets by way of the chain is the most effective way of prolonging chain life. The downside is that it is VERY messy and it means that most of us will continue to go the aerosol route even though we now know that it isn’t as efficient.

Anyway, cleaning the wheels was a trial, especially as my right knee is not amenable to any sort of kneeling. It is made infinitely easier by the use of my wife’s garden kneeler, which allows a soft surface on which to kneel, easy maneuverability and two strong handles to use to help you get back up again. c$50 from Bunnings and worth every penny. 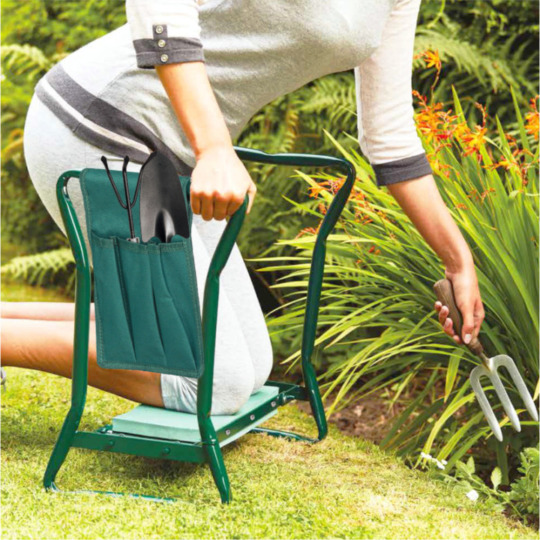 A final hose-off of the now-clean wheels and it was time to immortalise my efforts. And, I don’t mind saying, so, it was worth it all. 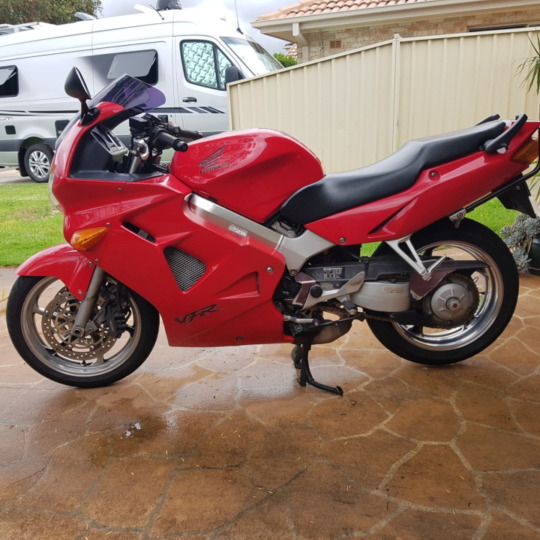 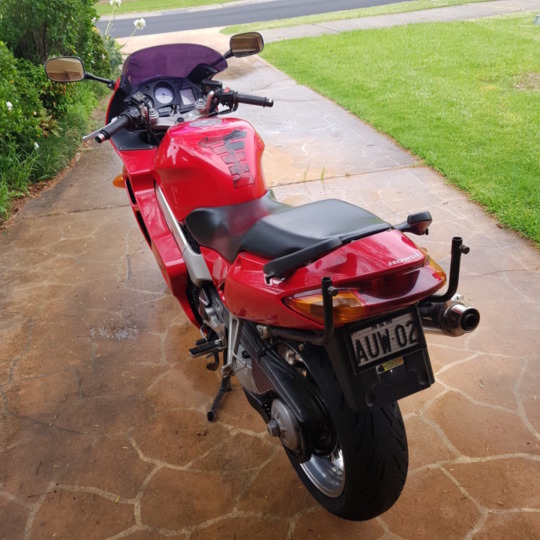 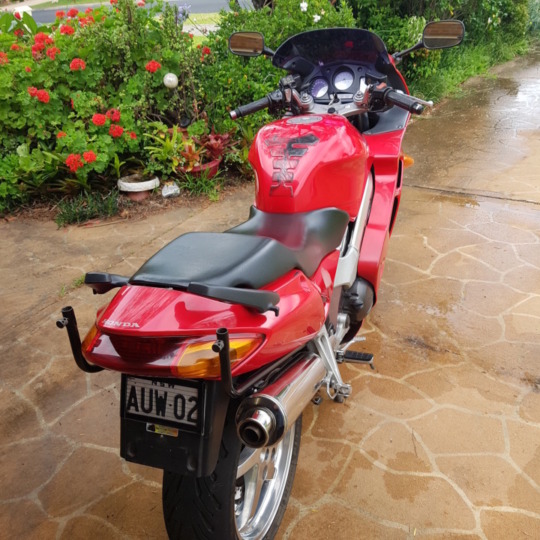 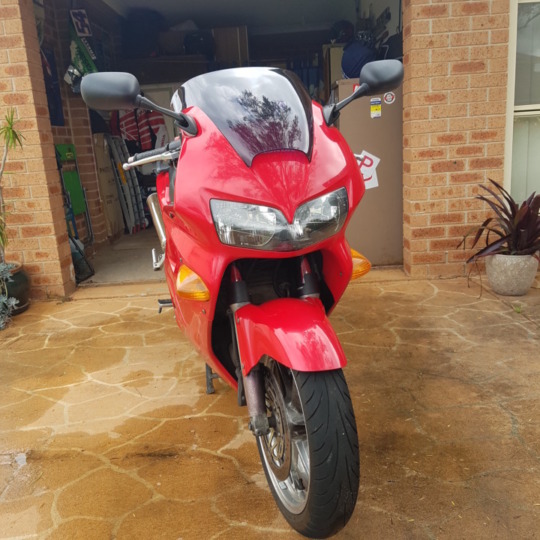 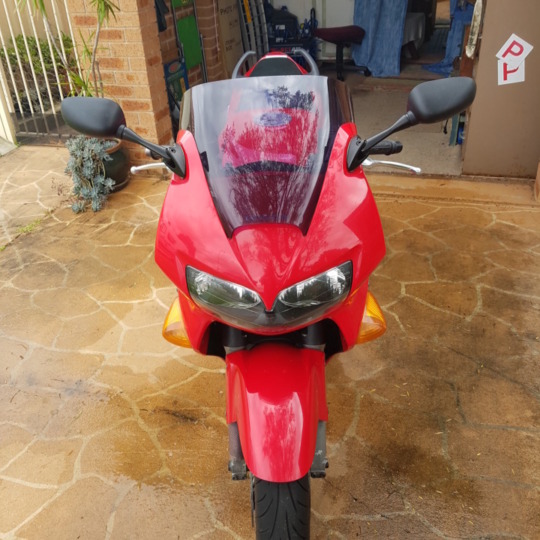 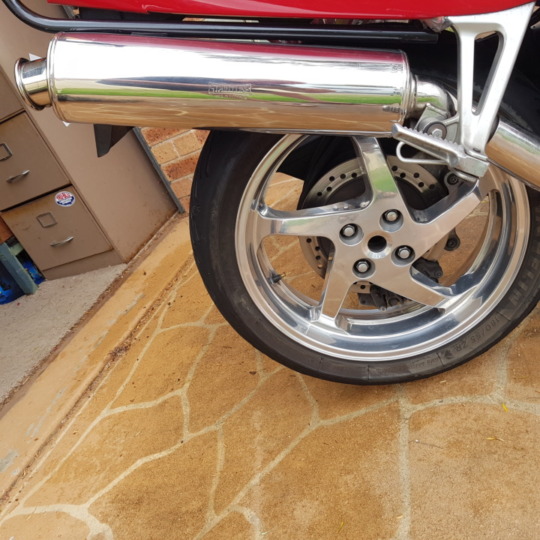 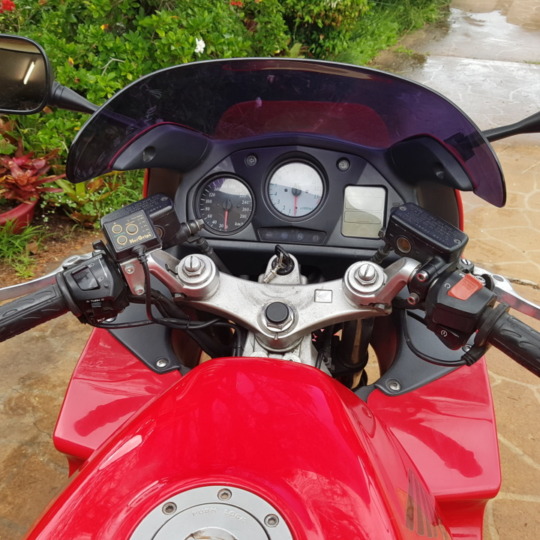 Not at all bad for a bike that is 24 years old and has covered 94000kms. Yes, the stainless steel headers do need a hit with Autosol but that’s a job for another day. Oh, and anyone who suggests that, since I am now an expert in the process, I can now do THEIR bike, the answer is an emphatic no.