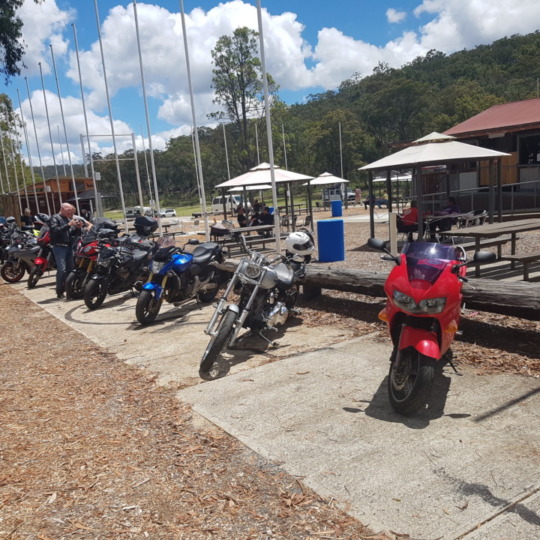 The weather for yesterday looked to be the best that it’s been for weeks so a good, long run was in order. I published the details on the Illawarra Riders site and was pleased to see quite a few respondents. Of course I’ve been around long enough to know that, just because people WANT to go on a ride, it doesn’t necessarily mean that they will actually GO on the ride.

Pleasingly I had four starters when we assembled at Hungry Jacks at around 0700. The temperature was set to be 28 so it was lightweight gear and that turned out to be the right decision.

My brother, Paul, can always be relied upon to turn up if the magic words, “Putty Ride” are mentioned and it was also good to see a good mate, Harry, arrive on his well-used VFR1200 Honda. Along for the ride was Matt, who is just about to get his “black” licence but has never done any long-distance riding at all; big props to him for biting off a 600km run to break his distance “duck.” Matt was on his little Ninja 300 and, as he was on his “P”s we knew that it would be a long day. I had advertised the ride as an “all welcome” ride and we always welcome novice riders, travelling at THEIR speed is never a drama.

The last entrant was Melissa, a lady who has been a member for some time but who I have never met. Melissa had done one long run only so she was also pretty much a novice though, on her immaculate 2012 model Softail Harley, she certainly wasn’t a “newbie”.

We set out on time and, after a few hiccups, we hit the Oaks Road heading north. Traffic was minimal, it is still Double Demerits period so we had the roads pretty much to ourselves. Bopping along at 90 was a breeze, me up front and Paul doing Tail End Charlie duties. The group stayed together well and we gassed up at Silverdale and headed on into Windsor. Best run through Penrith in quite a while, it was a buzz to show the “newbies” the backroad through the farmlands of the Camden Valley.

Our favourite bakery at Wilberforce was closed (this was to become the theme of the day) so we pressed on to the BP on the outskirts of town where we stopped for a drink and a break. Here Harry had to leave us as there was maintenance work to be done at home but it was great to catch up with him again. The run up from the Colo was somewhat marred by a lady in a Mustang convertible who obviously didn’t know where the accelerator was, but, you take your chances. Debz was also closed to food options were reducing.

With early delays and the weather had already heated up to past its predicted maximum and we had to decide what to do. We left it to our guests to let us know what they wanted and we weren’t surprised that they preferred to head home. We agreed wholeheartedly. Going on to the tree would have added over 100kms more to the journey and I was pretty sure that they had already gone close to their limit for a long-distance ride. It was still 240kms to home so the decision was unanimous.

We had to wait till Windsor to get some food, though and, while I like the fish and chips there, it wasn’t really ideal when we were in the closing part of the journey. By now my frozen shoulder was letting me know that I had well and truly exceeded its tolerance of my gung-ho and the final legs of the trip home were difficult in the extreme. A rest stop at Picton then grit your teeth for the final 60kms. I got home after 1800 so it had been a VERY long day and I was pretty wiped out. 468kms but it seemed much, much longer.

Feeling pretty chipper this morning after a 12 hour sleep, yes, you read it correctly, big thanks to everyone, Paul for being his usual, efficient TEC (I did do some TEC duties, too so he didn’t have to do it for the whole trip). And Harry, Matt and Melissa for being great road companions.

There will be more, watch this space. Oh, and Happy 2022 to all my readers, thanks for your continued support.