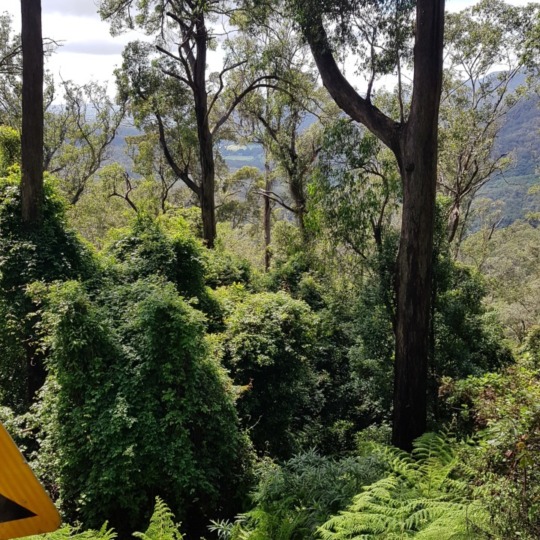 I doubt that many of my local readers ever actually stop when they are navigating Macquarie Pass. To begin with, there is the involvement with the immensely enjoyable road to consider, plus the desire to make sure that, in stopping, one doesn’t allow slower traffic to pass and impede the uphill progress. But mostly it’s just because the road is so narrow and constrained that there simply aren’t many places where you CAN stop, even if you wanted to.

In a car it is a similar situation though my wife often reminds me just how precipitous the drops are off the side of the road are, drop-offs that the driver/rider can’t see because they have to concentrate on the narrow ribbon of road and the constantly demanding corners.

There is a place, however, where you can stop and I have made it a practice to do so for quite a few years now. Living less than 20kms from the bottom of the Pass, as I do, the urgency to get a “clean” run is nowhere near as great as, even if I don’t, I can always do it again tomorrow or the next day. Being retired also makes it less urgent. so I regularly stop at the first hairpin, park the bike off the edge of the road, take a few photos and admire the scenery. Looking east from there it is possible to see just how deep the valley is, just how much the elevation change has been from the foot of the mountain and, if the day is really clear, right across the coastal plain and out to the Pacific Ocean.

Yesterday I decided that it was time for me to take Bexie out for a run since I was sure it had been some time since I had ridden her last. Did I say some time? A quick look at the Log Book revealed that it was the middle of January since she’d last been out of the shed. I wasn’t even sure if she’d start because it had been some time since I had topped up the battery with the battery tender. However, legendary Honda reliability made its appearance once again. Not only did the starter turn over immediately but the engine tried to fire at once. It would have fired sooner, actually, but I had forgotten that I’d turned the fuel tap off when last I rode, a practice that was drilled into me early in my riding career. Once the fuel was on and flowing, the engine fired and quickly settled down to a steady idle.

Honda riders (of modern Honda bikes) complain endlessly about the famous regulator/rectifier drama that has afflicted every Honda model since the early 90s but all three of my CBXs have been electrically reliable, thank goodness.

So I set off for a ride, stopped and took some piccies at the hairpin and rode on. 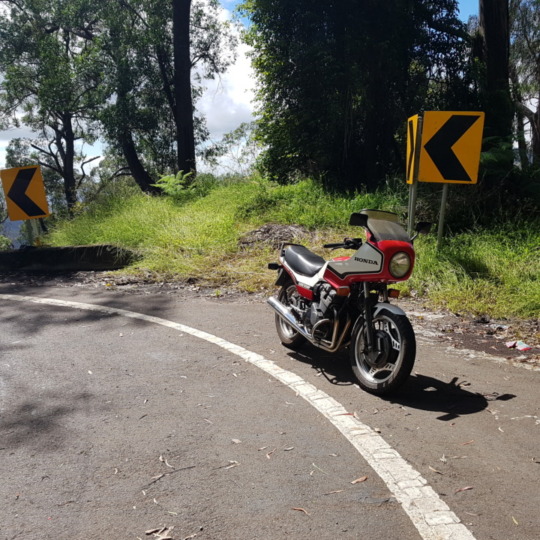 A hot chocolate at the Pie Shop and some bench racing and I headed down again, conscious of some gathering clouds and a distinct drop in temperature. I did do a lap of the Jamberoo Road down to Kiama and back before heading home, ahead of the showers, about 100kms all told. Hardly a huge effort but Bexie is near 40 years old so I don’t want to wear her out.

You may have noticed that this is the second weekend in a row where I have gone riding on a Sunday. As you know, I prefer riding mid-week when there are less crazies on the road. Last Sunday was an exception since the roads, for some reason, appeared to be almost deserted, but yesterday showed me again the wisdom of my usual practice. The Pass was filled with idiots, mostly doing incredibly dangerous things on sports bikes but there were also equally brainless motard riders, “L” platers on 300s and even adventure bike riders whose adventure will surely cease soon if they keep overtaking across double unbroken lines and into blind corners. Despite how enjoyable the ride was overall, I was glad to be home and out of the reach of the idiots.

I must ride Bexie more often, for a 40 year old bike she is incredibly enjoyable.