You are here: Home / News and Updates / Variety is… 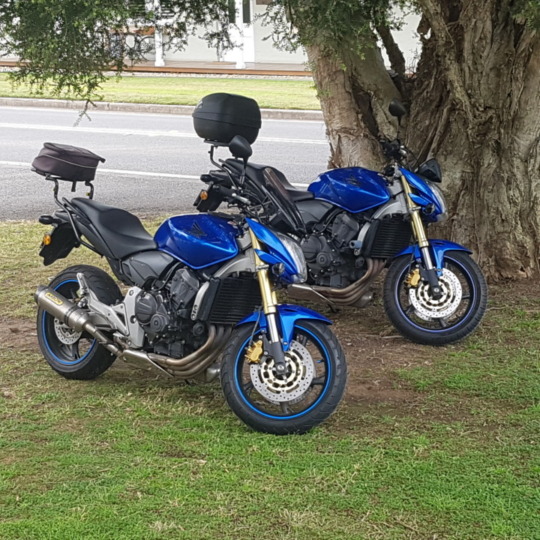 …the spice of life or so they say. Since I still have both of my bikes (lockdown has precluded me putting one of them on the market yet) I have been taking the opportunity to ride both of them alternately just to keep the fluids flowing and make life a bit more interesting. Since we were specifically told that riding our historic bikes did NOT fall into the “allowed activities” category during lockdown, poor Bexie has been very neglected.

However, having the extended opportunity of comparing both bikes is leading to some more extended decision-making about which to keep and which to sell. My frozen shoulder is still an issue and my physio tells me that I am going to have it bugging me for quite a while yet but I am able to ride and riding doesn’t seem to aggravate it which is great.

My initial decision to buy the 600 stemmed mainly from the February tumble and the possibly increasing difficulty in maneuvering the VFR. As time has passed and the strength in my arms has returned, this is not seeming to be as much of an issue as it was at the time. The 600 needs a new chain (the existing one is the original and is well past its use-by date) and there is now a leaking fork seal to contend with so it isn’t being ridden as much. All-up, the cost of repair will be about $500 which I can ill-afford at the moment on top of the $500 to clean the fuel system last month.

So, if I had to make a decision right now, I would have tp say that the VFR is likely to stay. I do love the lighter weight and the “flickability” of the 600 but I am not entirely happy with the “revviness” of the engine. The bike just doesn’t have the “character” of the V4, the cadence of the half-a-V8 beat or the whine from the gear-driven cams. Time will tell, as I said, there is no hurry.

I set out for a ride this morning but it started raining so I high-tailed it back home; not going to ride in the rain if I don’t have to.

Now that rural travel is allowed I plan to do a longer ride in the next few days though the forecast from now to the weekend doesn’t look great. But, the road will still be there, so..

I do wish these MotoGp riders would stop riding trail bikes in between races. Marc Marquez had a spill off his the other day, a mild concussion that is going to rule him out of the meeting at Portimao this weekend. No damage to the recovering arm, thankfully.

It hasn’t been a great fortnight for old riders unfortunately. American superbike ace, Wes Cooley succumbed to a long battle with diabetes and British star, Paul Smart died after being involved in a road accident. Time moves on.

Well, things are a bit thin at the moment so I’ll leave it at that and try to be a bit more productive again soon. Thanks for reading.