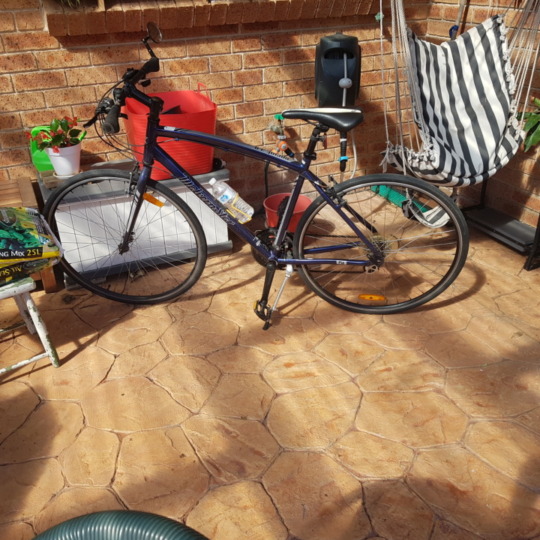 As you know, I’ve been trying to get into shape during the lockdown. I figure that there are two choices here; stay at home and eat and suffer the consequences or get out and start exercising and see some positive benefit from the enforced incarceration. So it’s the second that we have chosen and it’s working great. We probably walk every second day and routes range from around the block to paths that are further from home but still within our LGA. We don’t get too fancy, usually anything between 2 and 4 kms each time and just seeing some different scenery apart from the neighbourhood makes it worthwhile making the effort.

So far I’ve lost nearly 10kgs, my doctor is delighted and I’m pretty chuffed also. That, combined with a more sensible diet and smaller portion sizes has also greatly benefitted my blood/sugar levels which were quite high. Some of us are going to emerge from lockdown better than we were and some worse; I’m determined to be in the first category.

But walking is just a bit boring so I decided that I’d take the “pushie” out of storage and venture a bit further afield. Now most of you know that, in the aftermath of my accident in 2010, the bike got a big workout and using it certainly contributed greatly to my rehabilitation. Less than 12 months after the accident I was regularly riding 40+kms around my local area and I know how much that helped.

But with getting back into the real world again also meant that the bike gradually made its way to the shed and it’s there that it has stayed for a long time. So, time to get out and cover some kms again and build on the good that I have been able to already achieve.

The first issue was whether the bike would still be in rideable condition. Well, thanks to having been stored in my shed, it is. The tyres were flat and the bike was dusty and moving parts were in need of lubrication. Pumping up the tyres and finding that they still held pressure was good. Cleaning it up was easy and a liberal dose of WD-40 to the moving parts revealed that they were all moving as they should.

But, how would I handle it? Well, I found that it all came back to me pretty easily, a bit like riding a bike, really. A few little exploratories around the neighbourhood before I tried out one of my longer rides from years ago. 12 kms or so was a bit of an effort and lots more gear changing than what I would have done before on that route but I managed it and so the alternative means of exercise looks like being a regular part of my regime. We’re still walking as well so it looks like it’s going to be a good combination.

As far as MOTORISED cycles are concerned, the news isn’t quite so good. I did a run the other day up to the north side of town and at Bulli (about 25kms from home) the bike stopped and failed to proceed. Plenty of fuel and electrics seemed fine but it looked like a fuel pump/filter problem. So, the Hornet is in dock pending diagnosis and repair. It never rains but it pours, though. As Brad was wheeling it into the van he noticed that a fork seal is weeping. Damn, and it only has 34000kms on it. Still, since it is a 2008 model, my guess is that it has been stored and not ridden for a large part of those 13 years, so it’s hardly surprising.

DORNA announced this morning that Michelin has been confirmed as tyre supplier to the MotoGP class till the end of 2026; I’m not sure if that’s a good thing or a bad thing, I guess time will tell. Misano this weekend so there’s that to look forward to.

It’s Spring but, after three days of temperatures in the 20s, it’s dropped back down to the mid-teens and I’m back in tracky daks again. Oh well, it’s gotta warm up soon, hasn’t it?