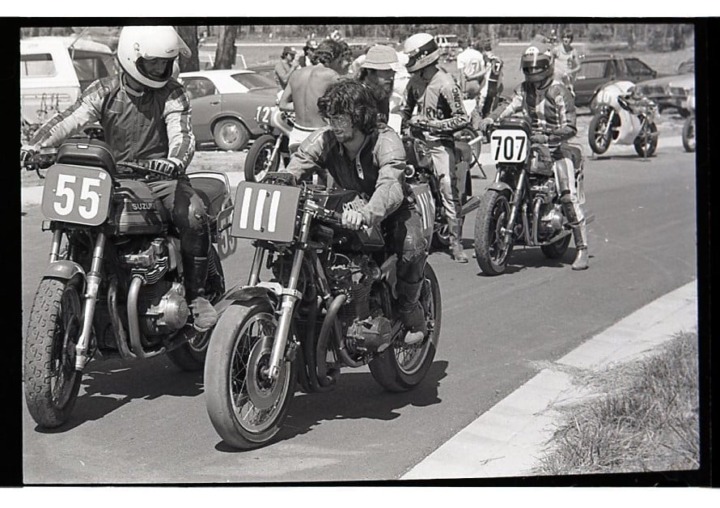 As noted on previous occasions, it never ceases to amaze me that, over 40 years after the event, previously unseen photos from the Canberra Road Closures still keep turning up. As you know, I was intimately involved in the organising and running of all the meetings and was privileged to be on-course commentator for the events as well.

These photos, however, are doubly significant because not only are the from the March 1981 event but they also feature the Shadowfax Kawasaki which I am privileged to still have in my possession. They were posted in one of my albums by my good friend, Dave Quinn who carried out the bulk of the Shadowfax restoration some 10 years ago. While Dave posted them he was at pains to acknowledge that they had been supplied to him by another well-known Kawasaki fanatic, Tony McGee who was living down the south coast of NSW last time I heard from his many years ago. Tony does not know who took the photos which is unfortunate but they do tell some interesting stories.

Incidentally, Tony supplied ME with this photo at the time of the Shadowfax restoration and, if memory serves me correctly, this is the bike that HE is (or was) building at the time. 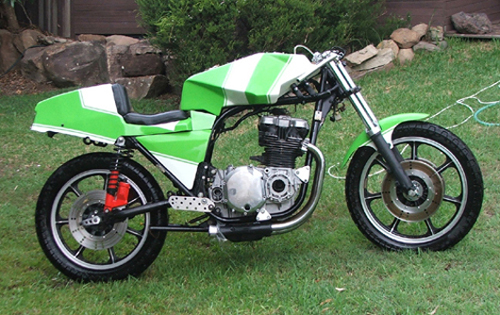 I wonder what happened to it?

Anyway, the first photo shows bikes lining up for scrutineering on the Saturday morning at Macarthur Park. Kent is in the foreground on the Shadowfax, fitted with a “normal” number board as he was planning on running the bike in the Production as well as the Superbike race. This was totally cheeky on both counts because not only was the bike grossly removed from the specifications and requirements of a Production bike but it was also way out of line as a Superbike (Unlimited Improved Production) as well. If I recall, Kent only actually rode the bike in the Superbike race in which he finished 3rd, but he was protested after the race (and justly so) and the bike was disqualified from the results.

Next to Kent on the #55 bike bike is another Canberra rider, Mike “Shirley Temple” Howard on a production-spec GSX1100 Suzuki (note that it is running treaded tyres unlike the Shadowfax which is wearing slicks). Mike was an extraordinarily talented rider and it was only lack of finance that prevented him from going right to the top. The bike itself is also interesting as it is the 1100 Suzuki that had finished 2nd in the Castrol Six Hour Race at Amaroo Park the previous October. Those of you wo remember the lap-scoring fiasco that accompanied that wet race will recall that the organisers originally awarded the race to the Gardner/Johnson CB1100R Honda only to change that when the Suzuki team protested the result. So, at this stage, Mike’s bike was still the official winner of that race. Much later, almost 12 months, if I recall, the results were amended again after a court case and the original placings were reinstated.

Also in the photo are Stephen Brook on #707, Steve Mapperson on the TZ #72 and, way in the background, Steve Fisher, with the number 7 on his back (Channel 7 sponsorship)  is standing with his back to the camera. 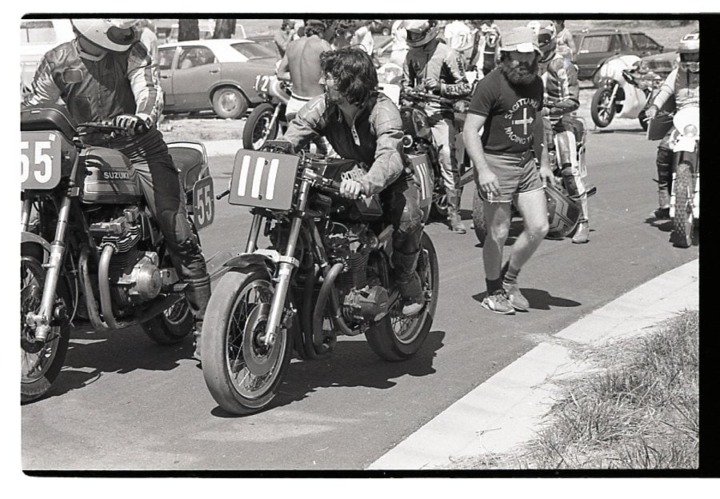 Here’s a closer shot. Does anyone know the identity of the guy in the funny hat? 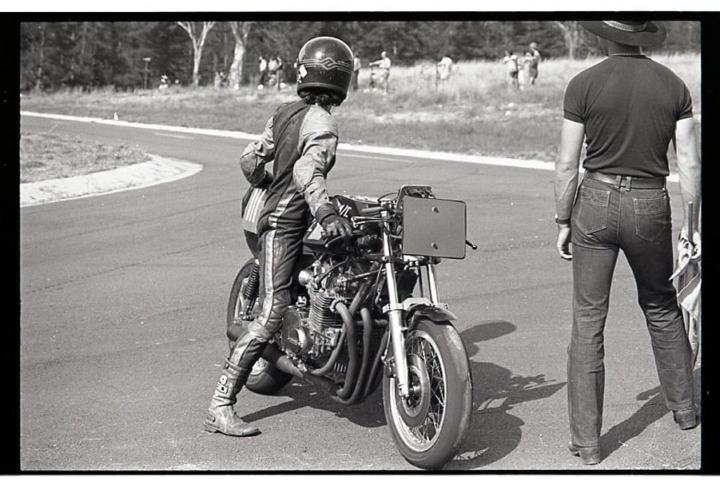 This is a shot from very early in the day, the numbers have not yet been put on the number board. 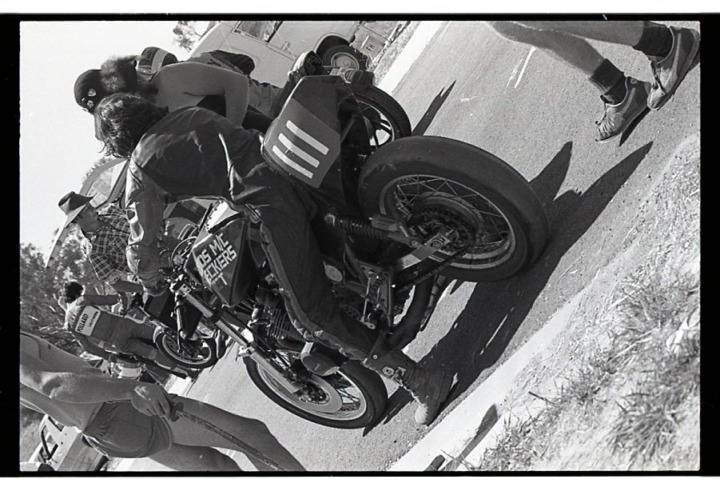 This looks like the bikes gridding up for either a race or a practice session. Kent’s pit helper is holding the home-made paddock stand that was made from a Kawasaki centrestand with a piece of water pipe welded onto it. I had it painted when I had the frame done and the bike is still sitting on it today. I’d love to know who the rider is in the background wearing a set of Pollard’s leathers. 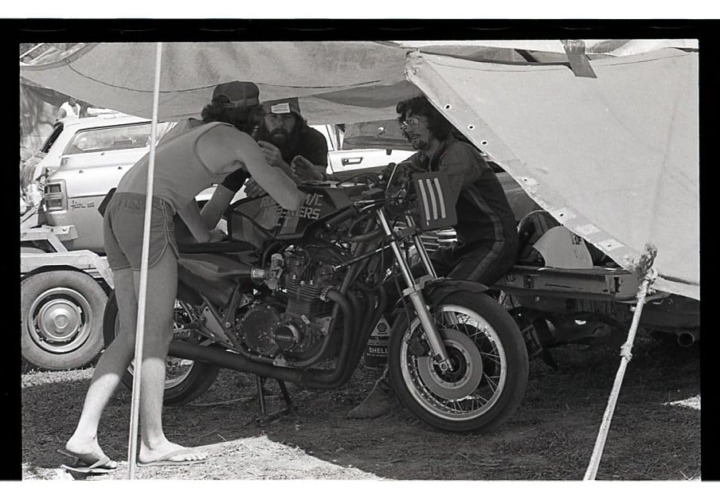 The meeting was in March so it was hot. Someone had the presence of mind to bring a tent. Again, I am hoping that Kent will be able to identify the other people in this photo. 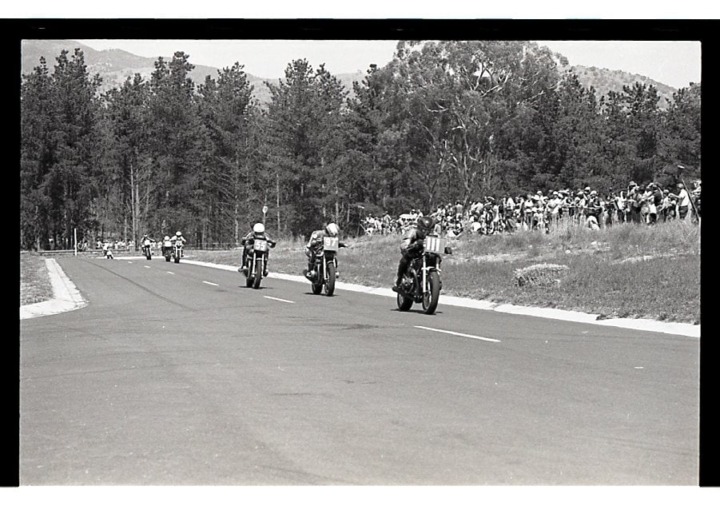 Kent out in front with Honda’s Glen Taylor behind followed by Mike Howard. Look at the size of the crowd and this was only a fraction of it. 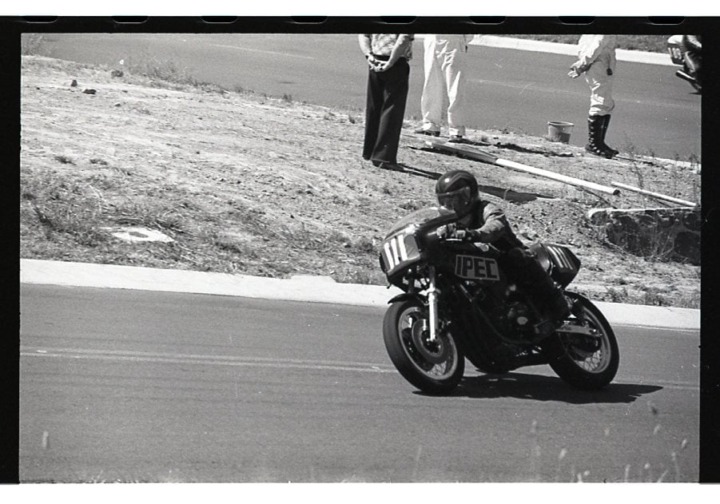 Kent, with the fairing back on the bike, heading for an emphatic victory in the Unlimited C Garde. He won by almost a lap which was amazing.

My thanks to Tony and Dave from finding and publishing these pics, yeah, I know, I’m living in the past but the past was so much better, wasn’t it?