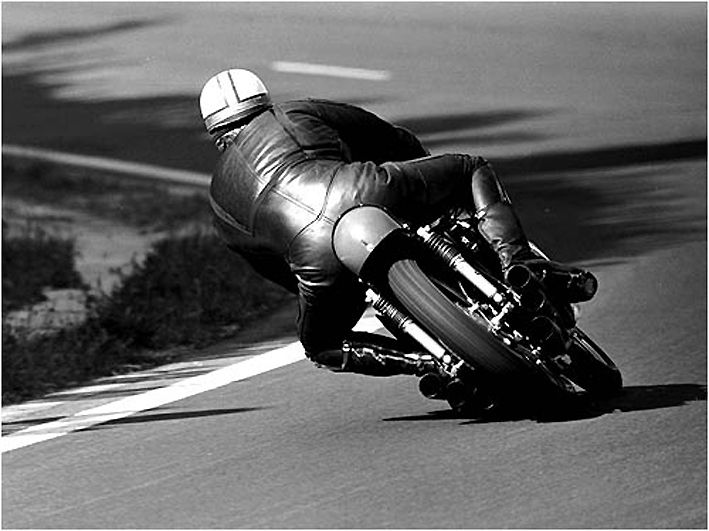 This might just be one of the most famous motorcycle racing photographs of all time. It is, of course, the greatest road racer of all time, Mike Hailwood, aboard the legendary Honda RC166 Honda. There is so much to like about this picture but I want you to concentrate on the exhaust pipes. Yes, there are 6 of them.

The date is 1964, 57 years ago, and Honda is in a war with rival Japanese manufacturers, Yamaha and Suzuki. With their on-going commitment to four stroke technology, Honda is being besieged by a swarm of two stroke-powered bikes that are threatening to de-throne them as the kings of Grand Prix racing.

Now, let me explain a few things. Firstly, the Grand Prix class structure was very different back then. There were more classes to start with. There were the 50cc, 125cc, 250cc, 350cc and 500cc classes. The 500 class was still being dominated by the Italian MV Agusta bikes and that manufacturer also fielded bikes in the 350cc class, the two most important and prestigious. So it was the smaller capacity classes that the Japanese manufacturers targetted first when they started to invade Grand Prix racing. It made sense, they were predominantly manufacturers of small-capacity road bikes so why not use the technology you already have?

Secondly, Grand Prix racing itself was very different. Unlike today when DORNA stages 19 or 20 meetings a year for the World Championship, in the 60’s the season might be only 7 or 8 races long. Riders filled in their time racing in domestic competitions as well as smaller, national championship series that often paid good prize money to attract entries and so became “must dos” for the riders.

Thirdly, the circuits themselves were very different. To begin with, the Isle of Man TT races were part of the World Championship and everyone raced there. Indeed, the TT carried nearly as much prestige as the championship itself and manufacturers devoted a huge part of their yearly budget ensuring that they put on the best show possible on the Island. And the other circuits were also vastly different. While there were some purpose-built tracks that staged championship rounds, many of the circuits on which the riders raced were street circuits or closed public road circuits. Even the dedicated circuits often included parts of the road network of the area. And the tracks, as well as being dangerous and fast, were often very long. The original Brno layout, for example, had a lap of around 14kms.

And so, Honda, to begin with, and then the other two Japanese brands, looked to the smaller capacity classes to make a name for themselves and their products in the European market. And Honda brought their outstanding four stroke engine expertise to the party. To begin with, a relatively simple platform was sufficient but, once the “invaders” came along, they realised that, in order to get the same sort of horsepower from their 4 stroke engines, they needed more cylinders. So the cylinder race began. Now this is not to say that the two stoke brigade didn’t get involved in the cylinder war, they did, but Honda chose to stick with four strokes both from a philosophical standpoint and also because it was what they knew best.

And the statistics of Honda’s “multis” are astonishing, even by today’s standards, so let’s go back to the start. In 1964, Honda replaced its single cylinder 50cc racer with a 2 cylinder one, their twin cylinder 125cc engine with a 4 cylinder one and their 4 cylinder 250cc one with the fabulous 6 cylinder as seen above. Yep, the same capacity as a small single-cylinder road bike or dirt bike today. The already-successful 350cc 4 cylinder was also replaced with a 6 cylinder engine.

But, it gets a lot more interesting than that. Let’s look at the specifications of these miniature marvels. The 50cc twin had a bore and stroke of 33 mm x 29.2 mm. Translated into something a little more easy to grasp, that meant that the top of the piston was just a little bit bigger than a 20c coin. The engine peaked at 19700 RPM but riders regularly took them over 20000 RPM.  The engine was matched to a 10 speed gearbox (!) and power came in at 13 bhp. The littlest Honda was capable of achieving over 160 km/h.

Despite this technological wizardry, Honda was still being pushed to the limit by their Japanese rivals so, at the end of 1965 they upgraded. The 125cc 4 became a 125cc FIVE cylinder (effectively two and  a half 50cc engines) and it revved to 18000 RPM and, eventually over 20000 RPM with power increase up to 35 BHP.

Now, statistics can be hard to assimilate, especially if there’s lots of them so let me try and make it a little simpler.

Here is a photo montage of the Honda 50cc grand prix engine. Yes, the two pistons, the conrods and the crankshaft can fit in the palm of a man’s hand. 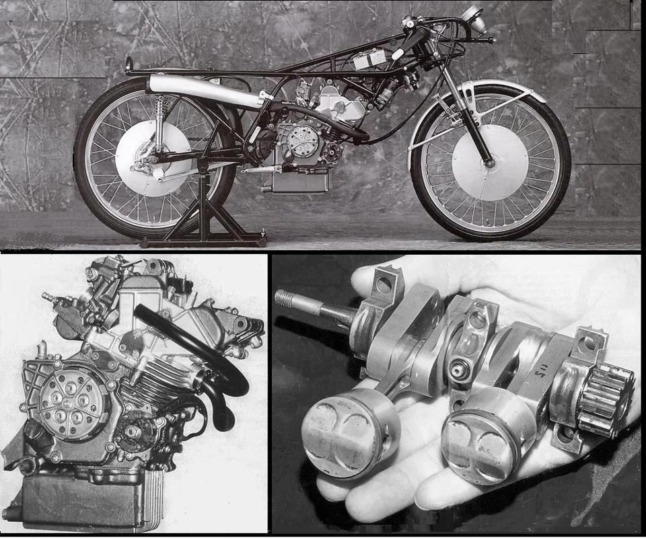 And see those cut-outs on the piston crowns? Yep, that’s to allow room for the valves. You see, all the engines were four strokes, all of them had twin overhead camshafts and all of them had 4 valves per cylinder. AND, if the top of the piston was just a bit bigger than a 20c coin then imagine how TINY the valve heads were!

I remind you again that we are talking about technology that existed nearly 60 years ago. I don’t know about you, but that boggles my mind.

I acknowledge the source of much of the technical data for this article from “Racing Motor Cycles” by Mick Woollett.