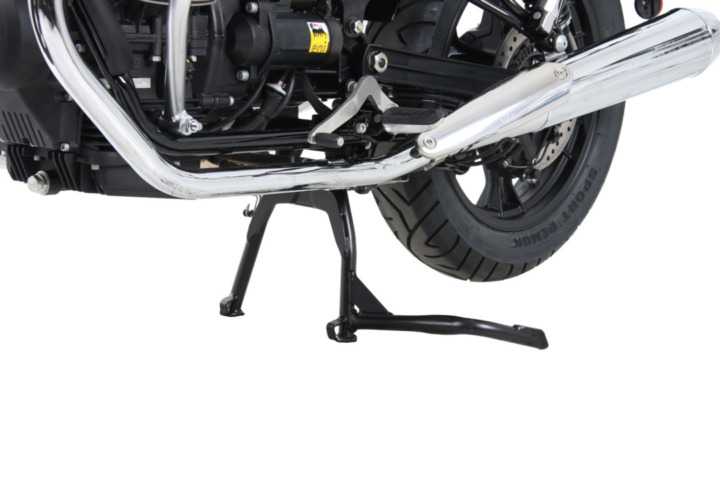 The last one was my VTR1000 that I bought from my neighbour next door. It was immaculate, sounded brilliant due to a gut job that had been done on the standard mufflers and it handled brilliantly. BUT, it was an original model which meant that it had a tiny fuel tanks (VERY annoying if one is touring as I found out when I did the MotoGp trip in 2007) and, allied to that, its performance was disappointing compared to the VFR that had preceded it. First order of business for me was to purchase a rear bike stand which I used throughout my time of ownership and actually passed on to the bike’s next owner when I sold it not long after.

Time was that every bike had a centrestand, I mean there are so many reasons why a bike needs one. Parking on uneven surfaces is much more secure if the bike is on the stand. Windy days aren’t nearly as iffy if you can have the bike more securely parked. Changing tyres and general servicing is made so much easier and particularly when the annoying task of having to adjust the chain is required (those BMW riders in the background can just sit down and shut up). There are so many logical reasons why a bike SHOULD have one and so few why a bike shouldn’t.

The only reason I have ever heard for NOT having a centrestand is that not having one increases cornering clearance. Well, who cares, really? If you’re going to lean your bike over far enough to perhaps lift the back wheel off the road when the centrestand tang hits the deck, then you should take your riding to the track when such practice is appropriate.

Weight saving? Really? Cut down on a burger or two and those donuts with your coffee and you’ll save just as much as a centrestand weighs anyway.

Now, here’s a couple of other, less-documented reasons why a centrestand is good. If you are a touring rider, you want to maximise distances between fuel stops, right? You can get a bit more fuel in your fuel tank if the bike is sitting up straight and level than if it’s leaning over on a side stand. The same applies to when you are checking the oil in your engine. Stand up your bike off the sidestand in the morning and watch how the oil level rises. Now I don’t know about you, but I’d like to be sure that the valuable metal components inside the engine are getting as much oil as possible before I go thrashing the motor.

“But,” someone will say, “It’s so hard to get my bike up on the centrestand the bike is so heavy.” In the immortal words of Colonel Sherman Potter, “Horse hockey.” Have you heard of YouTube? There must be hundreds of helpful videos there that show you that putting a bike, ANY bike, up on a centrestand is easy as. Hell, I am a 97 pound weakling and I could put my Gold Wing up on the centrestand as easy as I have been able to do it with any other bike I’ve owned, and that includes a big, hulking GS850G Suzuki shaft drive back in the day. As always, it’s all about technique, not strength and, If I can do it, anybody can.

But that doesn’t help me at all now that the Hornet is a sidestand-only jigger. I am grateful to my good mate, Wayne Timms, who gave me an Anderson rear stand for free just after I bought the Hornet. Anderson stands are the standard and, after wrestling with one of those appalling Torque stands from ALDI some years ago, using the Anderson is like shelling peas. It’s no on-the-go solution, of course, but I will live with it for the benefits it brings while the bike is home and in the garage. And at least I won’t be scraping the centrestand on the corners when I’m going up the Pass next time, because the way things are going at the moment, that’s probably never going to happen again anyway.

Centrestands are the duck’s guts. If you have one, be grateful and, if you don’t know how to use it properly, learn. And, if you don’t, just do what I do, get on social media and bitch about it. 🙂