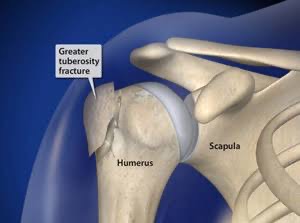 It is now nearly six months since my “off” which resulted in a non-displaced fracture of the greater tuberosity bone at the top of the humerus of my left arm. This little piece of bone that extends out of the top of the humerus is a very important one as it is the attachment point for two of the muscles that form the rotator cuff and we all know how troublesome that can be as our footballers seem to regularly suffer from rotator cuff problems. At the time I was told that surgery would not be necessary (thank goodness) and that immobilising the joint would allow it to heal naturally. Subsequent visits to the Fracture Clinic with attendant X Rays showed that this was working correctly.

However, as you know, my recovery has been slow and accompanied by only a very limited reduction in the pain level. Subsequent tests, including an MRI on the shoulder pointed to two problems both of which seemed to be the cause of the on-going pain. Bursitis (which had been suggested some years ago) and a torn ligament in the biceps.

So two injections, one in the bursar and one in the ligament, were carried out but with negligible results. The “wait and see” approach didn’t seem to be getting me anywhere.

My doctor suggested some physio and I took him up on the offer. Imagine my surprise when the technician recognised my name and told me that he was a regular reader of this blog! He had raced back in the early 2000s in the RB Imports series and I remembered his name though nothing really much more than that about him.

Anyway, once we had dispensed with the usual niceties, Tony got to with an examination of the troublesome shoulder. He ran me through a whole lot of tests looking for strengths, weaknesses and ranges of movement. At the end he said, “Well, I don’t think you have bursitis and I can tell you for sure that you don’t have a torn ligament. What you HAVE is a complaint called “Frozen Shoulder.”

Now I know all about frozen shoulder as my wife has had it in both of her shoulders while she was still working full time, a legacy of long periods at the keyboard. In the first instance it was cured by an operation and then, in the case of her left shoulder, it was wrenched back into position properly (under anaesthetic, I must add) because she could not lift her arm up far enough to get it out of the way when she had to have radiotherapy following her breast cancer operation.

However, in my case, Tony said that neither course of action was necessary as either course can lead to it recurring. However, I had to be content to let it heal itself, with gentle exercise, which could take between 12 to 18 months to happen. “We don’t know what causes it and this is the only real way we know to treat it,” he said.

Not exactly what I wanted to hear, but a step in the right direction. So I am exercising and looking after it (even more so than I was) and I’m hopeful that it will come good. As a matter of interest, I shared the result of my Physio visit with my doctor on Wednesday and, after consulting the ultrasound pictures, he is in agreement with Tony about the diagnosis.

Which raises the question, what did the cannibal get when he came back late to camp? The cold shoulder!