You are here: Home / News and Updates / Absent friends 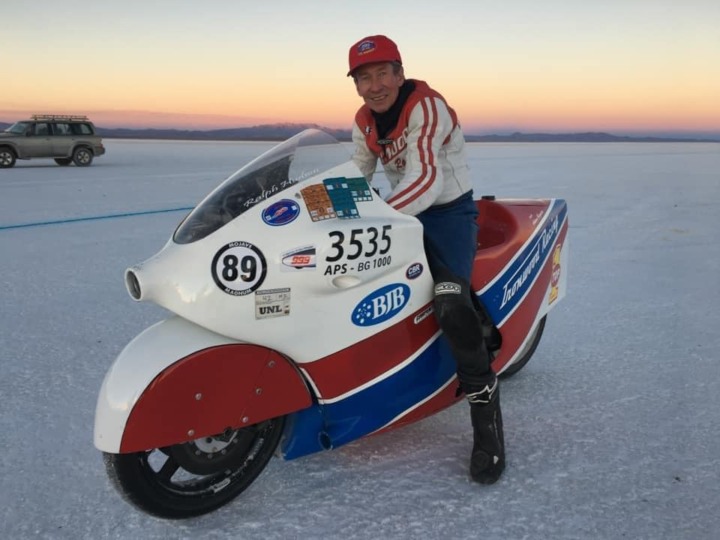 It’s times like this, when there isn’t a lot to do and life isn’t quite so busy that you think of things that you normally wouldn’t have time to. Today my thoughts turned to absent friends. Like my dear friend, Ralph Hudson, who pushed the limits just once too often in the salt flats and paid the ultimate price for doing so.

Someone said to me that, at my age, we go to more funerals than weddings and, sadly, it’s true. But friends don’t have to have passed away for them to be absent and missed. While we are locked down here, some of my friends are travelling, including a couple who are basking in the sunshine in far North Queensland. I am following their exploits with avid interest, especially as they have been visiting some of the places we did back in 2016.

Another of my friends has just returned home to Canberra after 39 days and over 14000kms on the road, though a lot of that time was spent OFF road. He went from Canberra to Darwin to flag marshal at the ASBK round. He rode all the way and camped on the roadside each night. After the meeting, he continued west, following the coast of WA all the way to Perth where he had a new rear tyre fitted before turning east and riding through the rest of WA, into South Australia, Victoria, NSW and home. His travelogue on Facebook was entertaining and jealousy-inspiring.

There are days when I get reminded of the fact that some of my friends, like Ralphie, paid the ultimate price for the pursuit of the gods of speed. Gregg Hansford, Warren Willing, Kenny Blake, the list is far too long. And others for whom the journey from the cradle to the grave has been shorter than what they, or others, expected it to be. My dad was only 58 when he died, much too young. The dad of one of a couple of MotoStars boys has gone on, leaving a grieving wife and two teenage boys who should have had much more time to spend with him than what they anticipated.

I was reminded this morning that a young lady who I knew well at high school, a year behind me, is celebrating her 50th wedding anniversary today. I haven’t seen Georgina since it left Booragul High School in 1965 but we keep in touch via Facebook. Georgie and her husband live in Bogabilla where they are involved in church ministry particularly reaching out to the local indigenous population. I wouldn’t mind catching up one day but it seems like just a dream at the moment.

While wishing one of my old CRRC buddies a happy birthday yesterday, I noticed that one of his friends is another old CRRC identity who I haven’t spoken to or seen for over 20 years. I messaged him and we got to have a great chat. He lives in Adelaide now, is contemplating retirement and stays busy fettling push bikes. Our conversation was as if we had only been separated for a short time, such is the nature of true friendships.

I also keep in contact with many of my American and British friends who I haven’t seen for nearly 18 months now that the Island Classic meetings aren’t happening. This also applies to local riders and identities who I usually only see once a year, at PI in January.

My point, if indeed I HAVE one, is that we should cherish and maintain our friendships, we never know when they might, for a myriad of reasons, be brought to a close. And, let’s face it, there really isn’t any excuse for NOT keeping in touch in these days of modern communications, is there?

I was able to get the VFR inspected yesterday and it passed with flying colours, of course. Not that I can go riding too far on it, but it is important to stay on top of the paperwork. It hasn’t been ridden since my “off” at the end of February but it started first push of the button nonetheless. Honda reliability.

It’s the end of July and, like clockwork, the August barrage of wild westerly winds, swept in and is continuing today. August’s always like this so, as if being locked down at home isn’t annoying enough, even going outside and enjoying the garden becomes a little more difficult. The upside is that we HAVE an inside in which to shelter.

My Facebook memory reminders have been telling me that it’s 6 years since we did the Qld tour in the Minibago. Time flies.

That had better do, can’t get too philosophical, can we?