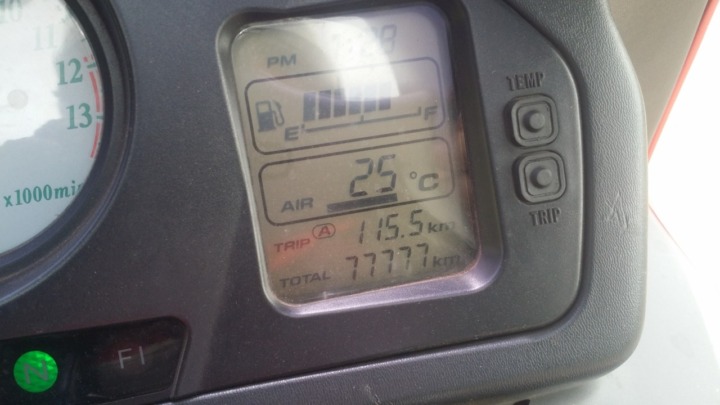 Being on social media does let you see how the other half lives, though. It is quite common to see people talking about their 750s and 800s that have done less than 10000km is the 20 or so years since they were made. Now I appreciate that people who live in the Northern Hemisphere don’t get as much opportunity to ride as I do and I’m very grateful for that but a guy listed his 750 for sale the other day in England. He had done 186 miles on it since the last time it was registered. Yep, in a whole year! No wonder he was selling it, it was a waste sitting in his garage unused..

Apropos mileage (sorry, I still call it that, “kilometrage” just doesn’t sound right, probably because it isn’t,) I get very amused when young blokes especially pop up on a forum or a Facebook group and say, “I’m looking at this bike that I want to buy but it has 67000kms on it, is this too much? It doesn’t take long for wiser heads to advise that, as long as there is a good service history, for most bikes, the engine isn’t even properly run in yet.

So how far IS too far? The simple answer is that there is no arbitrary figure. So many factors determine whether a bike has done too many ks. Most importantly, as noted above, the service history will make the biggest difference. And that’s what to look for first. I almost bought a mint VFR750 just before I bought the 800. It looked and rode like a new bike and felt SO different to my own bike at the time. It had 31000kms on the clock and had been religiously serviced. Sadly, I dithered around too long trying to make up my mind and, when I rang and asked, it had already been sold. Someone got a cracker of a bike.

That’s why I thought I’d share the story of Stan Wilson. Stan is a courier rider in Britain and he had, at the time this article about him was published, ridden over a MILLION MILES in the course of doing his job. Pretty impressive, I’m sure you’d agree, but the breakdown of these figures makes the enormity of his achievement stand out even more.

Let me give you the breakdown.

The article is over 20 years old and I have no idea what Stan has done since it was written but the figures are astonishing, I think you will agree. AND remembering that they are MILES, not kilometres (divide the miles by .625 to convert) the numbers become a little bit harder again to comprehend.

I don’t know anyone who has done anywhere near that. A friend here in Wollongong is a member of the Iron Butt Association and he does some pretty impressive stuff. To qualify to be a member, you have to cover a verifiable distance of 1600kms in less than 24 hours.

Another friend who lives in Canberra is presently over on the west coast of Western Australia. He rode from Canberra to Darwin, camping along the way in his tent, worked as a flag marshal at the ASBK round at Hidden Valley then proceeded on to the west, travelling down the coast and is getting a new front tyre for the bike on the outskirts of Perth today before heading east towards home (he got a new REAR tyre in Broome a few days ago,)

So, how far is too far? There are too many variable factors to provide even a ball-park figure. The determining factor is service history. Modern bikes are practically bulletproof and it is my contention that you could ride one forever they would still be OK. Of course, you’d be wanting to upgrade to a newer, shinier one, long before that. So, don’t let the numbers worry you, however far it has gone, it’s never too far.