You are here: Home / News and Updates / Bye, bye, Marvan 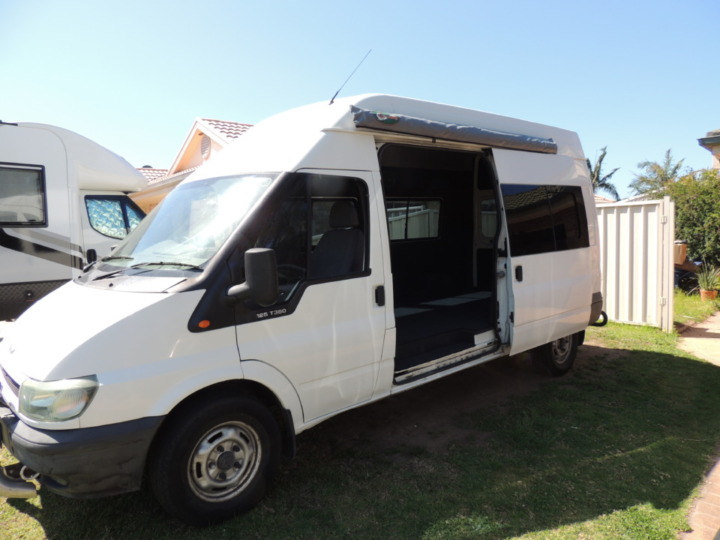 After sitting in the front yard unused for more months than it should have, we finally made the decision to sell Marvan, our do-it-yourself camper van. We had some fabulous trips and some great adventures but it was time to move it on and, with travel withing Australia booming at the moment, we decided that now would be the best time to get a good price at sale.

I treated Marvan to a service and his registration has just been renewed so that was another reason why we thought this would be the right time to sell. Living on a pension is not easy and, while fractional increases in the pension happen from time to time, they don’t even go close to matching the rising cost of living.

I started out by advertising him on Facebook Marketplace and was overwhelmed with responses. Within the first hour after listing him, I had about a dozen responses including one from a prospective buyer in Sydney who wanted to buy and who would, according to him, be down to Wollongong on the following day, to pick the van up. Now I’ve been around long enough to treat such things with a healthy helping of cynicism but, while I continued to field requests and queries from many more prospective buyers, I also engaged in a long conversation with my prospective buyer who had been the 2nd person to contact me once the ad went public.

It seemed that he and his wife have a Toyota bus and were planning on heading out that very week for a “long trip”. However, the whole thing went very pear-shaped when Gary put the bus in for a pre-trip service only to be told that the engine had a blown head gasket. Since this was the second time that this had happened to that engine, Gary and his wife decided that they didn’t want to go down that track again, so they started looking for a replacement. Mine fitted the bill perfectly.

Gary asked for my address and said he’d be down the next day just after lunch. I gave him my address and phone number and, sure enough, he arrived, good as his word. In the mean time, the phone was ringing off the hook, so to speak, with other prospective buyers.

We did a road test and the usual feature demo and Gary said, “Yep, I’ll take it” To say I was stunned is an understatement. We went inside to finalise details and this is where it got really interesting. I’d opened the garage to get something out and he noticed that I had a bike. Well, Gary apparently rides a  Honda Fireblade. Inside the lounge room Gary noticed my old Yamaha guitar on its stand in the corner. “Nice guitar,” he said, “Do you play?” Not a silly question as many people seem to use a guitar as a decorative object in their lounge rooms these days. I replied that I did and that I had a few other guitars as well.

“I have 17 guitars,” he said, I asked him what was his best one and he replied that it was a 1982 model Washburn. “Hey, how about that,” I said, “I have a 1981 Washburn 12 string.” “So, what is YOUR best guitar,” he asked. I replied that it was my 1969 Maton CW80/6. “No way,” he yelled, “I have one of those, same model and year.” I brought out the Maton and he was stunned. It is exactly the same as his, mine is a June 1969 model, his is a September. Apparently mine plays and sounds exactly as his does. It was quite spooky. Buying and selling of goods then took somewhat of a back seat as musical discussions took centre stage.

Eventually we did get back to the business in hand. Gary seemed to take it as read that he was buying the van. At no stage did we discuss price but he reached into his back pocket, pulled out an envelope and there was the asking price, in crisp, new $100 bills, right before my eyes. They weren’t wet so I figured they were safe. I counted the amount to be sure, we signed our respective parts of the rego papers and he hopped in the van and drove off. His brother-in-law’s Subaru station wagon, in which he had driven down from Sydney, stayed in my driveway and Gary returned from Sydney the next day by train and took it home as well.

In less than 24 hours I had advertised, sold and had delivered, the van. Don’t tell me that social media doesn’t work.

Here’s a happy snap with me and the new owner. I know that Marvan is going to continue to have a happy life. 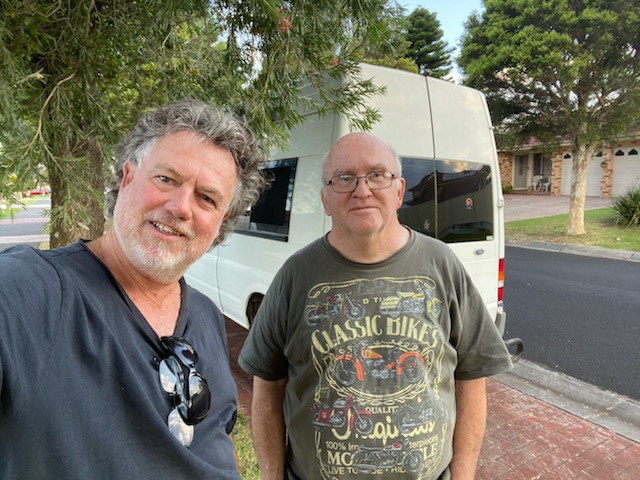