You are here: Home / News and Updates / Digging up the past

Most of you know that I am a 5th generation Australian and that I can trace my family in Australia back to George Hall and his wife, Mary Smith who emigrated to Australia in 1802 as free settlers. They settled in Pitt Town on the Hawkesbury River and were majorly instrumental in building the church at Ebenezer that was opened in 1809 and has been continuously used as a church since that date to the present day. It is the oldest church in Australia.

I’ve given you lots of details over the years and my attachment to the church, its history and those who are still there has meant that I’ve got a mountain of information about it.

I attended the Bicentenary of the church in 2009 and helped run the Hall family tent along with other members of my family from far-flung parts of Australia. There were 13 “Founding Families” of the church and the Halls are one of them.

Last Saturday, the Windsor Historical Society arranged a Heritage Day in the church grounds and my brother and I, as descendants of one of the founding families, were invited to attend. Now, as I have said above, I thought I knew a lot about Ebenezer and about my family’s part in its founding and construction but it was amazing how much extra information came to light during the course of the day.

The day began with a lecture by Ted Brill, a member of the Historical Society and also the Secretary of the church. Almost as soon as he started, he brought to the forefront a myriad of facts about the church and the founding families, representatives of who are buried in the cemetery that surrounds the building.

Now I had always believed that the founding families were all passengers on the ship, the Coromandel, that left England in early 1802 and arrived in Sydney 121 days later (a record for the time, the average at this time was 160 days). They were acting on an offer from the British government made to landed farmers in Britain who could have free land and supplies from the government if they were prepared to leave England and travel to New South Wales and start farming there around Sydney. As you already know, the early years of the colony were parlous in the extreme with severe rationing being in place for a number of years as the settlers discovered that the soil around Sydney Cove was not suitable for farming and crops were failing because of this. The colony almost died out. As well as the free settler families on board there were also 114 convicts, all of whom survived the voyage such were the humane conditions on board.

However, it seems that the offer was NOT one that had been made by the British government but came about because George Hall petitioned the government to fund and supply free settlers who wished to go to Sydney and start farming. George asked for a complete supply of farming tools, clothes, convict labour per capita of the settlers, money to help establish their enterprises and the free acreage  necessary for this to be a success. Despite how outlandish and over-the-top George’s request was, the British government gladly agreed to his complete list!

And so 8 families arrived on the Coromadel and settled around the Pitt Town area. Along with 5 other families who were already living in the area, representatives of each family met in the home of John Grono and agreed to fund and build a church. John Cavanagh provided the land and George Hall provided much of the funding and also the labour.

When the church was opened in 1809 it was consecrated as a “free” church, not tied to any particular denomination. Free churches were commonplace in Northumberland, George’s homeland, and across Scotland. It wasn’t until some 8 years later that Ebenezer became a Presbyterian Church.

Ebenezer was also built to be a school, began life with this dual purpose and remained as a school till 1876. As such, then, the building is not only Australia’s oldest church but also its oldest school building.

I did not know until Saturday that concurrently with helping build Ebenezer, George Hall also started a second project building another church on the other side of the river close to his own home at Pitt Town. That church also exists till this day and is part of the same parish. As well as his name being on the plaque inside the vestry at Ebenezer, it is also on the similar plaque at the Pitt Town church. I didn’t know about the other one so another trip to Sydney to see that one is being planned.

The building originally had a door on each of the “long” sides of the building which were later bricked up. The different stone work shows where they once were. (can be seen in the photo above). Later the door in the other side was re-opened to provide access for the school master who lived in the similarly built stone building on the river side of the church.

As the building did dual duty as a church and a school, a gallery that covered about a third of the main space formed an area where students would sleep when floods made it impossible for them to return to their homes. So Ebenezer was actually a boarding school as well. The girls slept upstairs in the gallery and the boys in the main body of the church.

George and Mary had 9 children, 7 sons and 2 daughters. All except Matthew Hall married and all had large families. They soon outgrew the cramped area around Pitt Town and, hearing that there was excellent farming land to be had further north, John Howes, one of the Cormandel “8” surveyed an inland route to what is now known as the Hunter Valley. This route was to become the Putty Road, how amazing that this connection exists to a piece of road that I have traversed hundreds of times since 1973. Even more amazing is that, it wasn’t until Ted detailed this part of the story that we both realised that Howes Valley, on the far northern end of the Putty Road, was named after him!

At the conclusion of Ted’s lecture, we all paused for morning tea. Walking up the ramp to the church hall, I heard a lady behind me say,”I beg your pardon, but are you a Hall?” I replied that I was and she said, “Well, so am I.” I was stunned because I thought I had a pretty good handle on where the surviving members of the family were and who they were but she was a complete stranger to me. As it turns out, Cristine is a descendant of Mary Hall, one of George and Mary’s 2 daughters. She had been out of the state when the Bicentennial took place and so we had missed her. Her ancestor had married a Johnstone, one of the other founding families so the Hall name died out on that line.

However, by far the most amazing revelation of the day happened when we were taken on a guided tour of the graveyard. Of course, I have explored it many times but it was fascinating to hear about some of the other members of the founding families and how their lives had worked out. But Ted was keeping the best till last. The tour finished at the grave of the boat-builder, John Grono. Like many of the toms in the cemetery (including George’s and many of his descendants) the grave is an above-ground crypt with a wrought iron fence around it. Ted asked us, “Have you ever considered how succeeding children were buried in a tomb like this. I mean, you couldn’t lift the lid as it is this massive slab of sandstone, so, how did they do it?”

None of us had any idea. “Well,” Ted continued, “In 2009, we opened John Grono’s crypt. A relative had claimed that another member of the family whose name was no on the plaque on the outside, had been buried there and they had obtained permission for the grave to be opened. We had an idea of how to do this so we began excavating at the end of the crypt. Upon scraping back the grass, we were amazed to find two large sandstone blocks lying at 90 degrees to the crypt. After moving those with the excavator we found a large hole that, when cleaned up a bit, revealed a set of beautifully constructed stairs that led down to a sandstone wall.  When this was removed we gained access to the burial chamber. We were not allowed to go in but photos taken with a Go-Pro camera revealed an astonishingly constructed crypt below the grave memorial above.”  Photos revealed that there were the remains of 5 coffins inside, one more than was expected so it seems that the relative of John Grono was correct.

To say that we were all flabbergasted is a gigantic understatement. Ted went on to say that preliminary tests of the other above-ground graves indicate that they all appeared to have elaborately built crypts under the main monument. 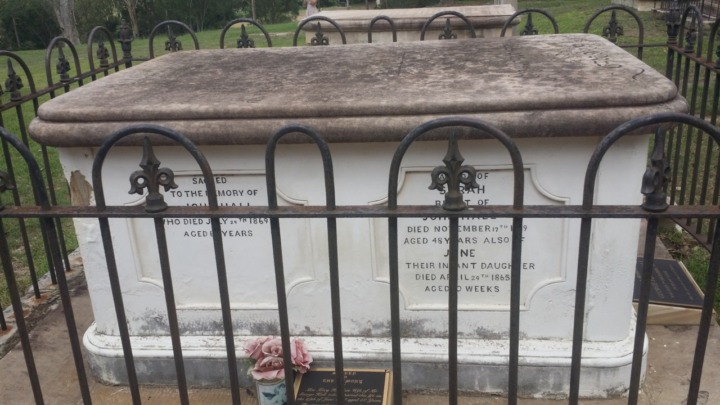 This is George Hall’s grave in which many of his descendants are buried. 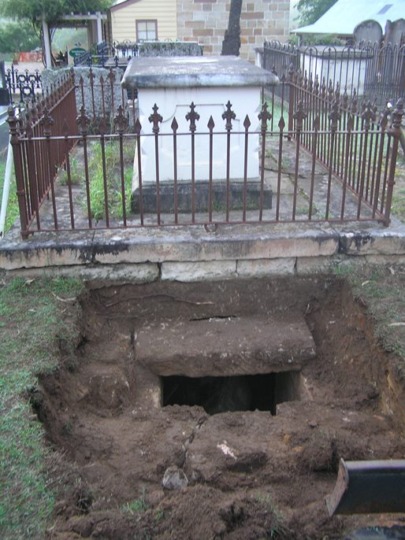 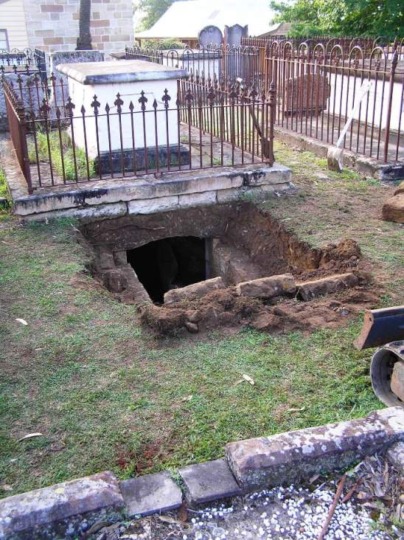 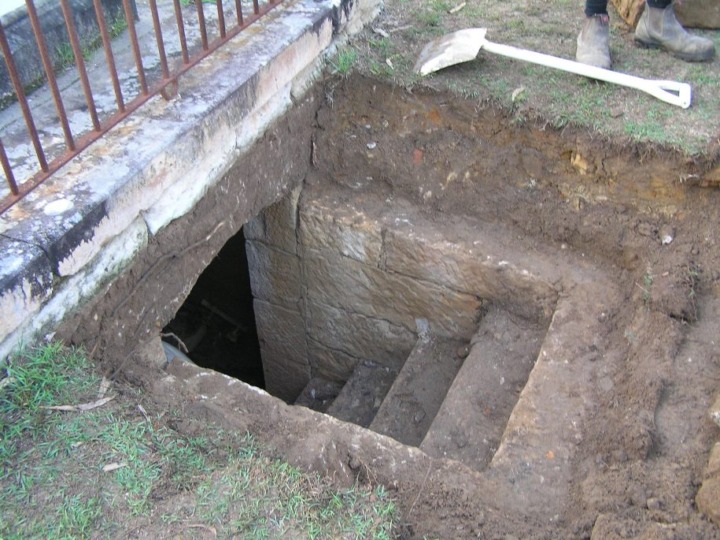 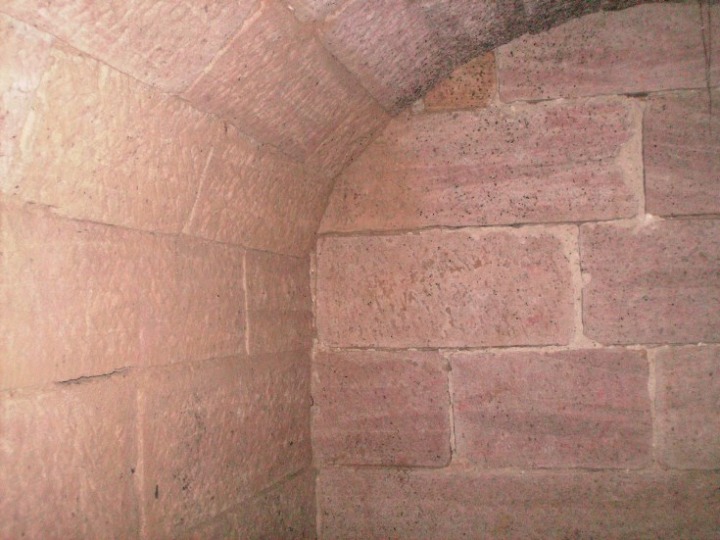 Thanks for bearing with me, I’m still a bit overcome by it all.